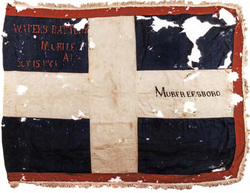 Flag believed to have been issued to
Waters' Battery of Mobile in 1863
(Alabama Department of Archives and History)
﻿Tattered Banners: Alabama’s Civil War Flags

The Civil War era saw a proliferation of flags in Alabama. The Confederacy used several different flag styles through the course of the war, and individual military units represented themselves with unique banners. Records of them can be frustratingly elusive and, when located, prone to error. Tracing flags and their respective histories remains an important task, because they teach us about the customs, motivations, and practices of Alabama on the brink of and during wartime. Robert Bradley, chief curator for the Alabama Department of Archives and History, shares the stories of some notable flags from the ADAH collection and offers a glimpse of the historical events those banners witnessed.

Buy This Feature
Additional Information
The following articles in the Encyclopedia of Alabama will also be of interest:
About the Author
Robert (Bob) Bradley is currently the chief curator at the Alabama Department of Archives and History. From 1974–1986, he was a historian with the National Park Service, specializing in the management, preservation, and interpretation of 18th- to mid-20th-century fortifications and military sites. Of his several assignments, his position as chief historian at Fort Sumter National Monument in Charleston, South Carolina, was his favorite. From 1986–1988 Bradley was historic sites administrator for the Alabama Historical Commission. Since coming to the archives in 1988, he has been responsible for the preservation, documentation, and conservation of the department’s collection of nearly a half-million artifacts. He is the author of Documenting the Civil War Period Flag Collection (ADAH web site), and he has contributed to a wide variety of Civil War publications. He is also very active in Civil War battlefield preservation.
Back to Top 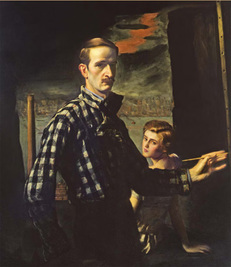 Painter Sidney Dickinson repeatedly travelled to Alabama from his northern home, following his humanitarian family, who worked at the Calhoun Colored School near Montgomery. Dickinson’s time in Alabama proved artistically fruitful, and the many paintings he created while in the state helped cement his reputation as an artist. Martha Severens offers an intricate look at Dickinson and his exquisite Alabama paintings, which have been exhibited in such sites as the National Academy of Design and the Pennsylvania Academy of the Fine Arts. His works present a community in transition, and they offer sensitive depictions of the dying agricultural lifestyle and the complexity of race relations in the early decades of the twentieth century.

Additional Information:
The following articles in the Encyclopedia of Alabama will also be of interest:

About the Authors
Martha R. Severens joined the staff of the Greenville County Museum of Art as curator in 1992. She graduated cum laude and Phi Beta Kappa from Wells College in Aurora, New York, and earned an MA in art history from The Johns Hopkins University. Prior to Greenville, Severens was curator at the Portland (Maine) Museum of Art, and before that held a similar position at the Gibbes Museum of Art in Charleston. She is the author of The Greenville County Museum of Art: The Southern Collection (1995), Andrew Wyeth: America’s Painter (1995) and The Charleston Renaissance (1998), an examination of the city and its artists in the 1920s and 1930s. 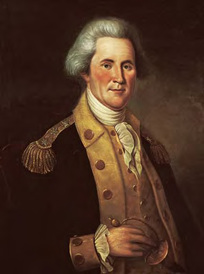 Sometimes the most entertaining stories of the past are more fabrication than truth. But what happens when these mythical tales become confused with history? John Hall investigates this phenomenon as revealed in the legend of the Welsh prince Madoc, who supposedly sailed to America centuries before Columbus and discovered Alabama. No reliable historical or archaeological evidence has supported Madoc’s presence in Alabama or even his existence, for that matter. But textbooks embellished the fiction, tours pointed out the legendary landing site, and a historical marker made it official. Madoc became “history”—and a cautionary tale.

.About the Author
John C. Hall is director of the emerging Black Belt Museum at the University of West Alabama in Livingston. He is a frequent contributor to Alabama Heritage and has contributed articles on the Hodges Meteorite, Hernando de Soto, Eugene Allen Smith (with Frances Robb), and William Bartram. He and environmental photographer Beth Maynor Young are authors of the recent University of Alabama Press book,Headwaters: A Journey on Alabama Rivers. He is grateful for the help of Kenneth Barr, Bob Bradley, Susan Dubose, and Norwood Kerr of the Department of Archives and History; Shirley Spears; and a host of cooperative librarians who joined in the search for the scattered Alabama history textbooks. Thanks also to colleagues Leah Rawls Atkins, Guy Hubbs, Stephen Meredith, Ed Mullins, Jim Stovall, and Andrew Rindsberg.
Back to Top 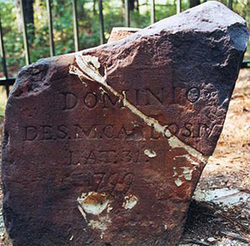 Today, we largely accept the state lines as a commonplace thing, something that’s beyond negotiation. At one time, however, the exact limits of Alabama were anything but certain, and they remained hotly contested. Robert Temple charts the history of Alabama’s borders, offering an informative and colorful glimpse of the state’s geographical limits—limits that have at times been mistakenly charted, revised, and even instrumental in determining the amount of water coursing through the state’s waterways. Bounding Alabama, it turns out, was neither simple nor straightforward; rather, it was a formidable task undertaken by a series of people devoting much time and energy—and quite a bit of discussion—to the effort.

About the Author
Robert D. Temple is a freelance writer based in Cincinnati, Ohio. His roots are in the South—South Carolina and Florida. After earning a PhD in organic chemistry, he worked in corporate research, then left to try something different—travel, writing, and work on environmental issues. A pass through Texarkana sparked an interest in towns located on U.S. state lines and named for the two states, inspiring a quirky ten-year adventure. He explored back roads and archives to learn the stories of all these state line places. His book, Edge Effects, published in 2008, concerns those places and how boundaries, frontiers, and marginality shape local history and lives. Several magazines have published his articles on that subject, as well as other pieces on historical topics. When not traveling, Robert lives with his wife, Sue Auerbach, in Ohio, Virginia, and Yucatán.
Back to Top 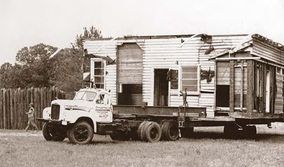 When industrial development threatened the property known as “the Old Robinson place,” researchers soon discovered the building had a rich history dating back to the 1830s. Thanks to cooperation between General Electric and the Alabama Historical Commission, the house, now known as the Graves House, was moved to Fort Toulouse Park near Wetumpka, where it stands today. Robert Gamble traces the historic journey of this home, which dates from the early years of Alabama’s statehood, and its current role as an educational historic site.

Additional Information:
The following articles in the Encyclopedia of Alabama will also be of interest:

About the Author
Robert Gamble is senior architectural historian for the Alabama Historical Commission and is standing editor of the “Southern Architecture and Preservation” department of Alabama Heritage. He was involved with the Graves House restoration. ﻿
Back to Top 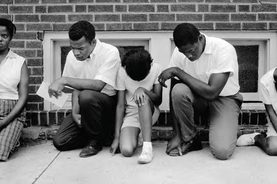 Click Here to go to our Becoming Alabama page.

Editor’s Note: Alabama Heritage, the Summersell Center for the Study of the South, the University of Alabama Department of History, and the Alabama Tourism Department offer these serialized histories as a part of the statewide “Becoming Alabama” initiative—a cooperative venture of state organizations to commemorate Alabama’s experiences related to the Creek War, the Civil War, and the civil rights movement. Quarter by quarter we will take you to the corresponding seasons 200, 150, and 50 years ago, allowing the history to unfold as it did for our ancestors—over time.

This quarter, Joseph Pearson explores the government’s delicate but essential negotiations to build a Federal Road on Creek land to facilitate trade and military troop movements. Megan Bever looks at the walkout of southern delegates to the Democratic National Convention in 1860, when the group declined a platform to defend slavery rights in new U.S. territories. Finally, Matthew Downs examines the aftermath of student protests in Montgomery and the rise of the Student Nonviolent Coordinating Committee (SNCC).

About the Author
Joseph W. Pearson is an MA student in the Department of History at the University of Alabama. His research interests include the nineteenth-century South, antebellum politics, and political culture.

Matthew L. Downs is a PhD student in the Department of History at the University of Alabama. His dissertation investigates the federal government’s role in the economic development of the Tennessee Valley.
Back to Top 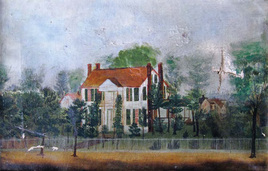 Nearly two decades ago, Robert Mellown received a phone call from a woman interested in learning more about two paintings she owned. Bearing only the words “The house where Katie L. Barry was born, Tuscaloosa, Alabama,” the paintings and their creator were otherwise a mystery. After extensive research in city history, building records, and historical documents, Robert Mellown and James McNutt have shed light this artistic mystery, successfully identifying the site and—most probably—the artist. More importantly, the painting restores for us the original image of an important house now completely altered, a magnificent garden long gone, and a moment in time when a girl named Katie Barry was born.

Back to Top
Reading the Southern Past
Creek Indians throughout History

This quarter’s book review column focuses on the Creek Indians and highlights several texts for general readership. Kathryn E. Holland Braund’s Deerskins & Duffels: The Creek Indian Trade with Anglo-America, 1685–1815, second edition (University of Nebraska Press, 2008) offers a valuable introduction to the Creeks in the greater eighteenth century. A New Order of Things: Property, Power, and the Transformation of the Creek Indians, 1733–1816 (Cambridge University Press, 1999) by Claudio Saunt explores the traditions of the Creek community and the revisions to those traditions that arose as a result of modernity and contact with American lifestyles. A similar project undergirds Okfuskee: A Creek Indian Town in Colonial America (Harvard University Press, 2004) by Joshua Piker, which investigates life in a prominent Creek town. Finally, a more recent text by Saunt, Black, White, and Indian: Race and the Unmaking of an American Family (Oxford University Press, 2005), traces a single Creek family and its struggles up to the present. Taken together, these books reveal a comprehensive, fascinating, and often disturbing picture of Creek life in America.

Additional Information:
Read more about the following topics on the Encyclopedia of Alabama website: