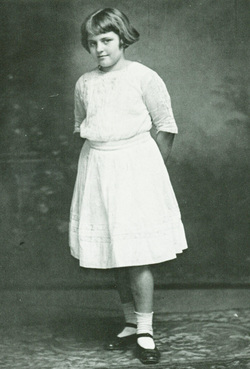 Almost everyone who knew Tallulah Bankhead has a story--most often featuring Tallulah in one or another irreverent act: Tallulah turning cartwheels to liven up a dull party; Tallulah of the quick and biting wit; Tallulah, whose idea of exercise was to walk with a car and driver following her so that she could be driven up hills; Tallulah, rarely without a cigarette and a glass of bourbon in hand, drawling the word that became her trademark--"Dah-ling!"  For many who have only heard stories of the legend, Tallulah Bankhead is an unforgettable personality. As this article demonstrates, she was also an endlessly fascinating person.

Additional Information
Tallulah Bankhead memorabilia can be found in the Bankhead Room, Town and Gown Theater, University of Alabama at Birmingham, and at the Alabama Department of Archives and History.

About the Author
Maridith Walker, a native of West Point, Mississippi, is a writer/editor for the University of Alabama News Bureau and the College of Arts and Sciences. Ms. Walker, formerly a member of the staff at Southern Living magazine and, later, at Texas Monthly, holds a bachelor's degree in English from Millsaps College, Jackson, Mississippi, and a master's degree in English from the University of Alabama.

Walker admits to thoroughly enjoyeing the opportunity to delve into the remarkable life of Tallulah Bankhead. "I feel as though we're friends now," she says. "I've even begun to dream about her: We are driving down a back road in Mississippi. Tallulah is at the wheel; she has had a little too much to drink. I say, 'Tallulah, don't you  think I should drive?" 'No, I'm in complete control,' she says emphatically as the car veers off the road into a ditch.

"Isn't that just like her?" asks Walker. "She never follows the road."

The author would like to thank Eugenia Rawls and Mrs. John Oliver for their assistance with this article.
Back to Top 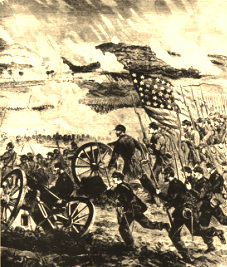 Pickett's Charge, July 3, 1863,
as viewed from the Union position.
(Courtesy Harper's Pictorial History
of the Civil War)
Alabama at Gettysburg

Gettysburg remains the ultimate engagement of the Civil War, an event that signaled the final turn of fortune against the Confederacy. Among those who had come farthest were men in gray serving the colors of their native Alabama: some sixteen regiments of infantry, as well as Van de Graaff's Fifth Battalion, Hardaway's Battery, and the Jeff Davis Artillery. These soldiers would pay a heavy price in the cause of the Confederacy. This article recounts their story.

About the Author
The opportunity to write "Alabama at Gettysburg," says its author, Philip D. Beidler, came to him as a happy coincidence of lifelong fascination and geographic accident. Born in a small Pennsylvania farming community, he literally grew up on the Gettysburg battlefield. Educated at Davidson College in North Carolina (A.B., 1966) and at the University of Virginia (M.A., 1967, and Ph.D., 1974), he has now spent a comparable portion of his adult years as an English faculty member at the University of Alabama. "As I came to realize from my childhood on," he writes, "Gettysburg has always been for me a presence. What I saw the chance to do here was to come to terms with that sense of history as presence both through my own eyes and now also through the eyes of the Alabama soldier that the rich documentary record allowed me to re-imagine."

Beidler, a lieutenant in the U.S. Army (Armor) during the Vietnam war, has published on a number of topics in American literature, including several articles on the literature of Vietnam. His book on the subject, American Literature and the Experience of Vietnam, was published by the University of Georgia Press in 1982.

The editors would like to thank Miriam Jones, Alabama Department of Archives and History, and Bailey Thomson, Orlando Sentinel, for assistance in preparing this article.
Back to Top 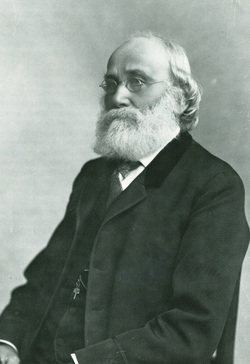 During the last quarter of the nineteenth century, Charles Mohr, one of Alabama's first botanists, enjoyed a well-deserved reputation as the foremost expert on Alabama plants. The accuracy of his observations, his painstaking attention to detail, and his generosity with his knowledge were widely known and highly praised by the scientific community. Mohr's life was not without hardships: poor health often confined him to bed, and his location far from Northern cities meant he did not have access to needed reference books and specimens. In spite of his adversities, any of which might have deterred a less determined man, Mohr became one of the most respected botanists in the South. This is his story.

About the Author
Larry Davenport, associate professor of biology at Samford University, holds an undergraduate degree in botany from Miami University (Ohio), and M.S. and Ph.D. degrees in biology from the University of Alabama. A native of Seattle, Washington, Davenport became interested in Charles Mohr in 1976, during his first summer in graduate school at the University of Alabama, when he was asked to begin a card file on the Mohr Herbarium. Fascinated by the man and the collection, Davenport wrote his master's thesis on Mohr's work, and he has since published several articles on the subject.

In addition to the history of botany in the Southeastern United Staes, Davenport's research interests include the systematics of aquatic plants. Recently he received the North Carolina Botanical Garden Research Award, an award presented annually to the author of an especially meritorious paper in the areas of plant systematics, evolution, or conservation.