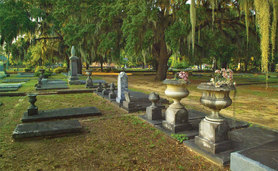 Although often viewed simply as monuments to the past, cemeteries are actually a treasure trove of information about the lives and customs of people and their communities. Alabama’s Black Belt cemeteries prove no exception. Exploring them reveals a great deal about Alabama communities. From Eutaw to Demopolis, Dayton to Marion and Selma, Alabama’s cemeteries hold important lessons about the wartime customs, religious beliefs, and social practices of Alabamians.

About the Author
Thomas C. Ware, professor of English at the University of Tennessee at Chattanooga, is co-author of Theodore O’Hara: Poet-Soldier of the Old South (University of Tennessee Press). He holds degrees from the University of Louisville and the University of North Carolina at Chapel Hill and has published articles and reviews in such journals as The James Joyce Quarterly, EIRE-Ireland, English Literature in Transition, Kentucky Humanities, South Atlantic Review, Studies in Short Fiction,and Victorians Institute Annual. He has hosted the Southeast meeting of the American Conference for Irish Studies in Chattanooga on three recent occasions, including in 2009, and he served for five years on the SAR Prize Selection Committee. He and his wife live on Lookout Mountain in Tennessee. 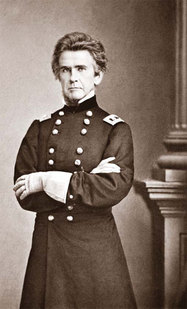 Brig. Gen. Ormsby MacKnight Mitchel
helped lead the southern thrust
of Buell's Army of the Ohio
(Library of Congress)
The Sacking of Athens and the Souring of ‘Civil’ War

In May 1862, after repeated struggles, the Union occupied Athens, Alabama. Led by Colonel John Basil Turchin, the troops inflicted considerable damage on the town, but the exact cause of that damage remains disputed. Some witnesses claimed that Turchin gave his men explicit permission to plunder Athens as revenge for earlier Union defeats. However, when the charges were formalized in a trial, presided over by future President James A. Garfield, evidence against Turchin proved conflicted. Turchin's punishment reflected a growing leniency toward "war crimes" and led to a shift in the attitudes of citizens on both sides of the war. It soon became much more violent than “civil.”

Additional Resources
For additional information on this topic, Alabama Heritage suggests the following book: From Conciliation to Conquest: The Sack of Athens and the Court-Martial of Colonel John B. Turchin by George C Bradley and Richard L. Dahlen (University  of Alabama Press, 2006).

About the Author
Thomas V. Ress resides in Athens, Alabama. He is a freelance writer and has been writing for sixteen years. He has had over one hundred articles published in numerous magazines, newspapers, and websites including SKI, Backpacker, Blue Ridge Country, and others. His article “Five Hours at Sulphur Trestle Fort” appeared in the Spring 2008 issue of Alabama Heritage. Ress grew up in southern Indiana and received his undergraduate degree from the University of Evansville and his MBA from Eastern Kentucky University. He currently does consulting work for the federal government. 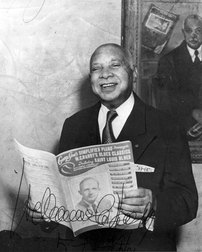 Growing up in Florence, William Christopher Handy had little hope of pursuing a career as a professional musician. His parents insisted that music interfered with religion, and other adults in Handy’s life disparaged what was often perceived as the wild lifestyle of musicians. Despite the hardships he faced, Handy was determined to make music his career, and he worked diligently to achieve this dream, traveling throughout the South to learn and practice his trade. Along the way, he found love, earned a following, created a new genre of music, and established himself as the “Father of the Blues.”

About the Author
Residing in Montgomery Alabama, Daphne Pruitt graduated from the University of Alabama with a BA in Communications. While completing courses in journalism, she also participated in internships, writing articles for Missing Ink and creating and editing web content for theTuscaloosa News. She worked as an assistant editor for Alabama Heritage for a year. She would like to thank Dr. Jennifer Greer and Dr. George Daniels for their support. She would also like to thank the editorial staff of Alabama Heritage for guiding her in the development of her first feature article. 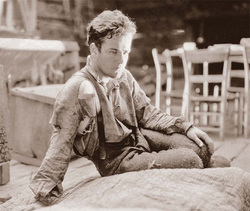 In 1926 Forrest James was a student athlete at Alabama Polytechnic Institute, the future Auburn University, when he was spotted and asked to star in a Hollywood movie. The film, Stark Love, premiered to great acclaim, making its mark as one of the last films in the silent movie era. Its star, too, had great appeal, and was even offered a Hollywood contract. Interestingly, Hollywood never acknowledged the reality of James’s life, and advertisements for Stark Love touted him as an Appalachian Mountain man who made one movie then retreated back into the hills. In reality, James, influenced by his mother, turned his back on Hollywood and returned to his native land of Alabama, where he became one of the most successful multi-sport athletes at API and established himself as a successful businessman and community member.

Additional Information
Author John White’s documentary will launch the Southern Appalachian International Film Festival on Thursday, October 22, at the Paramount Center for the Arts in Bristol, Tennessee. The venue is a beautifully restored 1931 theater. Dr. White’s documentary, which follows the making of Stark Love and the people involved in it, is a centerpiece of the festival and the 25th anniversary celebration for the Department of Appalachian Studies at East Tennessee State University.

About the Author
John White, an Atlanta writer and filmmaker, holds a doctorate degree in education from Auburn University. His interest in Stark Loveemanates from his friendship with the late Cal James Sr., son of the film’s leading man. White’s article, “Myth and Movie Making: Karl Brown and the Making of Stark Love” appeared in Film History: An International Journal in 2007. White is married to Atlanta playwright, political guru, and community leader Melita Easters. 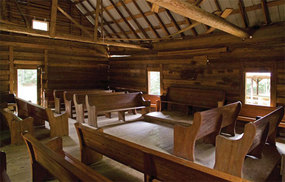 Standing in the Talladega National Forest, the Shoal Creek Baptist Church offers an example of a late eighteenth-century rural sanctuary. Built over a hundred years ago, the log structure remains under the care of descendents of its original parishioners, who work to preserve and protect this monument to their ancestors’ spiritual heritage. Although no longer a practicing church, the structure is used for occasional worship services, Boy Scout events, weddings, and reunions. The primitive building remains one of the forest’s best-kept secrets—a structure that reminds passersby of the importance of preserving the remnants of our past.

About the Author
Joseph M. Jones of Huntsville is a former newsman and retired director of public affairs at the NASA-Marshall Space Flight Center. In recent years he has developed a keen interest in matters of the past and authored an article in the Winter 2009 issue of Alabama Heritage on the McCrarys of Madison County. 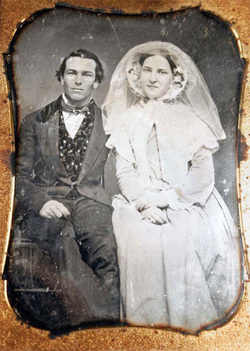 Mr. and Mrs. William Morgan, 1852
(Ernest Dollar)
Alabama Treasures
The Shoemaker and His Bride: The Story Behind a Picture

An antique photograph of a couple on their wedding day led its purchaser to uncover the story of Montevallo’s Mr. and Mrs. William Morgan. A shoemaker by trade, William Morgan left his wife and child to serve in the Confederacy, was wounded in the Battle of Antietam, and became a Union prisoner before finally returning home to his family. Throughout it all, this photograph served as a precious and rare memento, reminding his wife of her beloved while he was at war.

Additional Information
The following articles in the Encyclopedia of Alabama will also be of interest:
About the Author
Ernest Dollar earned degrees in art and history from the University of North Carolina at Greensboro and public history from North Carolina State. He now serves as the Executive Director of the Preservation Society of Chapel Hill and is completing a book and documentary about the end of the Civil War in North Carolina.
Back to Top 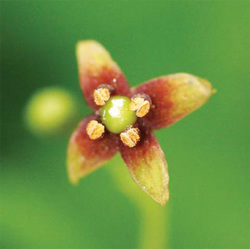 The story of the wildflower Croomia
combines death, prolonged litigation,
and the founding of the Confederacy
(W. Mike Howell)
Nature Journal
The Story of Croom and Croomia

Back to Top
Reading the Southern Past
Fame, Fleeting and Fragile: Remembering Forsyth, Hilliard, and Nott

Stephen Goldfarb reviews biographies of lesser-known but historically significant Alabamians: John Forsyth, Henry Hilliard, and Josiah Nott. The Pen Makes a Good Sword: John Forsyth of the Mobile Register (University of Alabama Press, 2006), by Lonnie A. Burnett, follows Forsyth’s influential career as a newspaper editor who helped shape public opinion in the years surrounding the Civil War. A Southern Moderate in Radical Times: Henry Washington Hilliard, 1808–1892 (Louisiana State University Press, 2008), by David I. Durham, follows the life of Forsyth’s contemporary, Henry Hilliard, a state representative, lawyer, and minister from Montgomery. Reginald Horsman’s Josiah Nott of Mobile: Southerner, Physician, and Racial Theorist (Louisiana State University Press, 1987) follows Nott, an ethnologist whose scientific hypotheses about the origins of disease proved much more accurate than his opinions on race. Each of these biographies helps rescue its subject from the anonymity of the past.