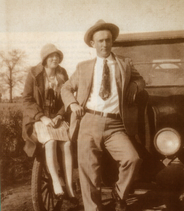 Delmus Willie Zorn with the love of his life, Flora O.Z. Dukes, c. 1931, in Henry County. D.W.'s chosen profession, moonshiner, was frowned upon by O.Z.'s family, but the couple wed nevertheless after a seven-year courtship. (Courtesy Steve Elliot.)
The Life and Times of D.W. Zorn (A Story That Is Mostly True)

The life of Delmus Willie Zorn, "one of the best moonshiners to ever come out of Henry County [Alabama]" and Zorn’s moonshine business are profiled by author Steve Elliott, grandson of D.W. Zorn. Elliott describes the man who developed a thriving business in fine (if illegal) whiskey-distilling as "a wanderer, a good-timer, a lover of the soil on which he was born and raised." Although many moonshiners used the trade as a supplement to farming, D.W. Zorn and his cousin Whit maintained a full-time career in "hauling whiskey." The Zorns’ reputation for high production standards earned them customers all over south Alabama and Georgia, from farmers to bankers. They aged their whiskey for up to a month in wooden kegs with charred interiors. Said D.W. Zorn of the finished product, "You could drink it like water and it wouldn’t burn you. Brother, that was some good stuff!"

The following article in the Encyclopedia of Alabama will also be of interest:
About the Author
A native of Haleburg, Alabama, Steve Elliott holds a B.S. in history education from Troy State University. He is a former Henry County educator, a former representative for the Herff Jones Yearbook Company, and the founding president of the Haleburg Historical Society. Presently he is working to restore the Mt. Zion Colored Baptist Church, c. 1871, in Haleburg. Inspired by a teacher, the late Christine Glover McGriff, Elliott has been researching the history of his family and the town of Haleburg since he was twelve. He and his grandfather, D. W. Zorn, spent many hours together retracing D. W.'s childhood and moonshining days.
Back to Top 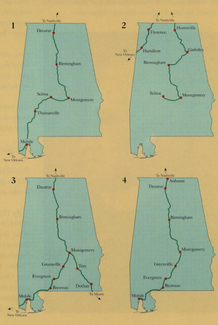 Since its beginnings in the early part of this century, the route designated U.S. Highway 31 has drastically changed the course of transportation and the mode of travel in Alabama. While it was William Simpson Keller, Alabama’s first chief highway engineer, who decided on the final route, it was pioneering Alabama feminist Alma Rittenberry who began the quest for a better north-south highway, one that would bring the North and South "into closer bonds of friendship and brotherly love." As the "Good Roads" movement grew in popularity, individual citizens and state officials realized the need for a unified north-south route from the Great Lakes to the Gulf. "Aunt Babe, Uncle Simp, and the Origins of U.S. Highway 31" tells the story of how two strong-minded figures contributed to the development of the highway in Alabama.

About the Author
Alan Grady, the lead contract historian for NASA's Marshall Space Flight Center in Huntsville, holds a B.S. in political science from Jacksonville State University and an M.A. in history from the University of Alabama in Huntsville. He first "discovered" U.S. Highway 31 on his frequent trips to Birmingham and Montgomery while researching material for his first Alabama Heritage article, "When Good Men Do Nothing: The Murder of Albert Patterson," Winter 1996.

The author wishes to thank the following for their assistance with research for this article: Richard Weingroff of the Federal Highway Administration, Rosemary Johnson and Ron Pouncey of the Alabama Department of Transportation, Susan Bzdell of the Morgan County Archives, the staff of the Birmingham Public Library Archives, the staff of the Alabama Department of Archives and History, and the families of Alma Rittenberry and William Keller.
Back to Top 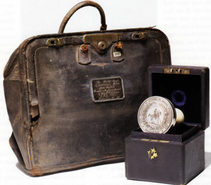 Further Adventures With the Great Seal
By Guy R. Swanson

In July 1864, less than a year before the Civil War ended, a young lieutenant in the Confederate navy set sail from England with precious cargo: the Great Seal of the Confederacy, symbol of the Confederate States and of the president’s authority. He was under strict instructions not to let the seal fall into enemy hands, even to throw it overboard if necessary. The Great Seal reached Richmond safely, but when that city fell to federal troops in April 1865, the seal disappeared. For almost fifty years only a few people knew where it was—and they were sworn to silence. "Adventures with the Great Seal of the Confederacy" describes the creation, subsequent disappearance, and rediscovery of the Great Seal--a topic involving intrigue, suspense, and several prominent Southern politicians, among them Alabamian Clement Claiborne Clay. "Further Adventures with the Great Seal," by Guy Swanson, an expert on the seal, relates information recently uncovered about the seal’s use during the Civil War.

Art in the South
Dixon Hall Lewis: An Alabama Silhouette

The silhouette of Dixon Hall Lewis (1802-1848), a U.S. senator from Lowndes County, Alabama, was created by William Henry Brown, a native of Charleston. Brown is considered one of America's leading nineteenth-century profilists, and the portrait of Lewis is regarded as one of his best.

About the Author
Robert Mellown is a professor of art history at the University of Alabama.
Back to Top
The Nature Journal
The Siren's Song