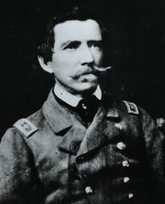 This issue chronicles the adventures of the CSS Alabama, the Confederacy's deadliest raider, including the discovery of her wreck off the coast of France and recent salvage efforts. Though the Alabama never once berthed in a Confederate port, her exploits boosted the morale of Southerners as she made an epic--and deadly--maritime journey around the world. During the Alabama's 22-month campaign, her commander, Captain Raphael Semmes of Mobile and his crew captured or sank 65 Union merchant vessels at a cost of approximately $6 million to the Union. Author Christopher Henze, a U. S. diplomat for 25 years, served as a cultural attache at the American embassy in Paris and acted as liaison between the French and the American sides in negotiations over ownership of the Alabama artifacts.

Additional InformationThe following articles in the Encyclopedia of Alabama will also be of interest:Multimedia:
About the Author
A United States diplomat for twenty-five years, Christopher Henze first developed an interest in CSS Alabama while serving at the U.S. Mission to the United Nations in Geneva. Later, as cultural attache at the American embassy in Paris, he acted as liaison between the French and American sides in negotiations over ownership of the Alabama artifacts. Henze retired from the Foreign Service in 1992 and is currently a consultant at the International Energy Agency in Paris.

The author wishes to thank Brian Turner of the U.S. Mission in Geneva and Ulane Bonnel, president of the Association CSS Alabama, for their support. Dr. Bonnel, a maritime historian, is spearheading efforts to explore the CSS Alabama. 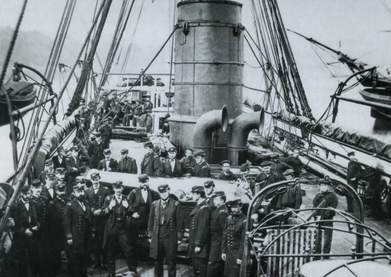 A companion piece, this article recounts a little-known story of the final days of USS Kearsarge, which ran aground in the Caribbean in 1894. Her captain and navigator were brought up on charges of "inefficiency in the performance of duty" and "negligence." Both were found guilty.

Additional Information
The following items in the Encyclopedia of Alabama will also be of interest:
About the Author
Eugene Alvarez received his Ph.D. in history from the University of Georgia. Professor Alvarez, recently retired from Macon College, University of Georgia System, has published numerous magazine and journal articles and is the author of Travel on Southern Antebellum Railroads, 1828-1860 (University of Alabama Press, 1974) and Where It All Begins: A History of the United States Marine Corps Recruit Depot, Parris Island, South Carolina.

The author wishes to thank Col. Andrew I. Lyman, USMC (Ret.), for his assistance with this article and for information concerning the USS Kearsarge and his grandfather, Lt. Charles H. Lyman, USN. Additional records were furnished by William W Jeffries, United States Naval Academy Archivist and Museum Director, and Mr. Stanley Kalkus, Director, Navy Department Library, Washington Navy Yard, Washington, D.C. The author would also like to thank Dr. Stephen Wise for reading and commenting on the text.
Back to Top

Life magazine photographer Jay Leviton snapped this now-famous picture of Mrs. Hodges in the Sylacauga hospital, when Dr. Moody Jacobs pulled the covers back to reveal her bruised hip. (Courtesy Jay Leviton, Atlanta)
Ann Hodges and the Hand of Fate

Ann Hodges of Sylacauga is the only documented case of a person being injured by a meteorite. Her remarkable story attracted national media attention. In Alabama, the publicity focused on a law suit brought by Hodges' landlady, who claimed that she was the rightful owner of the meteorite. The public sided with Mrs. Hodges, who told the pres, "I think God intended it for me. After all, it hit me!" Although the landlady won the lawsuit, Hodges, after a modest private settlement, was able to reclaim the meteorite, which she later donated to the Alabama Museum of Natural History at the University of Alabama. The 8 1/2 pound meteorite remains there today on display. Another 3-3/4 pound fragment of the same meteorite found by a farmer nearby is on display at the Hall of Meteorites at the National Museum of Natural History in Washington, D.C.

Additional Information
The following article in the Encyclopedia of Alabama will also be of interest:Multimedia:
About the Author
John Hall is Director of Interpretation of the University of Alabama Museums. The fall of the Hodges meteorite is a clear memory of his childhood. His father, Cody Hall, then a reporter for the Anniston Star, was one of the many newsmen who covered the story. "I went down to Sylacauga thinking I was covering a plane wreck," Cody Hall recalls. "It was just like a circus by the time I got there." The Hodges meteorite story "has kind of followed me around," says John Hall. Not only did his father cover the Sylacauga story, his parents met in a Smith Hall geology class in 1941, about fifty feet from where the meteorite is now displayed and the same distance from Hall's present office.

Meteor expert Harold Povenmire has spent a lifetime fascinated by astronomy, particularly meteorites. He has held a number of posts with NASA and has been director of several planetariums in the Cape Canaveral area. In recent years he has taught astronomy and followed his meteor interests, resulting in the publication of several books, including Fireballs, Meteors and Meteorites. Povenmire has been following the Hodges meteorite story for more than ten years and has. interviewed most of the surviving participants. Despite an extended effort, he has been unable to verify the existence of a reported third fragment. Povenmire serves as an advisor to the Alabama Museum of Natural History in meteorics.
Back to Top

In 1920 Marie Bankhead Owen, succeeded her late husband, Thomas M. Owen, as director of the Alabama Department of Archives and History. Part of her purpose was to complete her husband's dream of creating a Gold Star book in honor of American soldiers killed during the Great War. However, she was never able to complete the project; after World War I,  Americans turned their attention inward and did not want to be reminded of the European conflict. Neither did the Alabama legislature, which did not provide the necessary funding to support the project. The results of Mrs. Owen's extensive research, however, are with us still, buried in the midst of a records series at the Alabama Department of Archives and History called the Public Information Subject Files--Alabamians at War.

About the Author
Joan Clemens is a state government records archivist at the Alabama Department of Archives and History, Montgomery.
Back to Top
The Nature Journal
Jack (or Jill)-In-The-Pulpit

The common Alabama woodland plant jack-in-the-pulpit follows a complex sexual scenario known as sequential hermaphroditism in which an individual plant will "choose" to be either male or female depending on its reproductive potential. L.J. Davenport examines this complex reproductive cycle.

About the Author
L. J. Davenport is professor of biology at Samford University in Birmingham, Alabama.
Back to Top