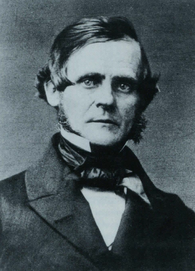 In the 1790s, mental health patients were often confined to hospital basements or chained by the waist or ankles to the walls of ten-foot square cells. But in the 1930s, activists Thomas Kirkbride and Dorothea Dix fought for moral medical treatment of the mentally ill, including an architectural environment more conducive to recovery. And author Robert O. Mellown tells the story of how, in 1852, Alabama became the first state to appropriate sufficient funds for the construction of a mental hospital designed in the new moral architecture, detailing the Alabama Insane Hospital (now Bryce Hospital). Mellown outlines the workings of the hospital, along with changes in the treatment of mental illness both in medical concepts and philosophy of architectural design since the hospital's construction, and how Bryce Hospital has dealt with these changes.

Additional Information
Kirkbride, Thomas S. On the Construction, Organization and General Arrangements of Hospitals for the Insane (Philadelphia, 1880).
The following items in the Encyclopedia of Alabama will also be of interest:
About the Author
A frequent contributor to Alabama Heritage, Robert Mellown is an associate professor of art history at the University of Alabama. In 1987 he received a grant from the Alabama Historical Commission to write an historic structures report on the hospital. During the three years Mellown worked on the project, he conducted an architectural investigation of the main hospital and support buildings and studied hospital records and relevant materials in the University of Alabama's special collections library. Betsy Hayslip, Executive Director of the Heritage Commission of Tuscaloosa County, and Kathy Fetters, Staff Librarian, Bryce Hospital, assisted Mellown in his research for both the histOric structures report and this article.
Back to Top 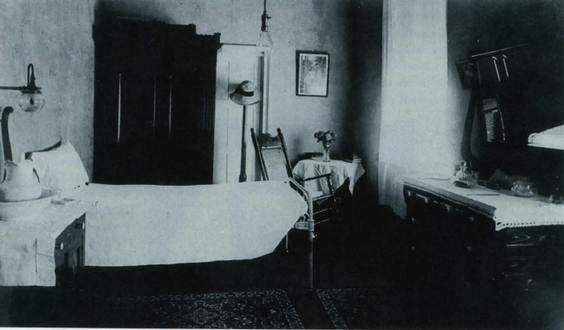 Patient bedrooms (1916) were furnished with items one might expect to find in a middle- class home or hotel of the period. (Photograph courtesy Heritage Commission of Tuscaloosa County)
Insights into an Insane Asylum

In May 1881, thinking he was on a pleasant trip to Tuscaloosa with his family, seventy-year-old Reverend Joseph Camp was admitted to the Alabama Insane Hospital by his wife and son-in-law. The shock of being admitted to the hospital only grew during Camp's next five months and twenty days as a patient there. Upon returning to his family in November, Camp published his book, entitled An Insight into an Insane Asylum, at his own expense. Camp's book notes the treatment he received as a mental patient of the Alabama Insane Hospital, including practices of nurses and physicians that often border on cruelty. To this day, Camp's book remains the only significant exposé of the Alabama Insane Hospital ever written.

About the Author
John Hughes holds a Ph.D. in history from Rice University, where he specialized in the study of American legal and medical history. A former Bankhead Fellow in American History at the University of Alabama and a former Research Fellow in legal history at New York University School of Law, Hughes has taught history at the University of Alabama and the University of Texas and is the author of The Letters of a Victorian Madwoman (University of South Carolina Press, 1992) and In the Law's Darkness: Isaac Ray and the Medical Jurisprudence of Insanity in Nineteenth-Century America (New York University School of Law, 1986). He is currently working on a manuscript entitled "The Kindness of Strangers: Insanity, Commitment and Care in the Victorian South."
Back to Top 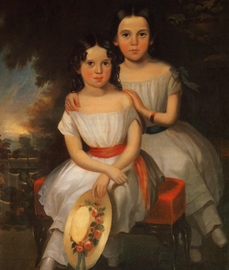 Of Frye's portrait (c. 1856) of her daughters Sarah Louise and Mary, Mrs. Goodloe declared, "I would not take a million for the picture." (Courtesy Mrs. Waler E. Morris)
William Frye, Artist

In nineteenth-century Alabama, few portrait painters were more successful or more prolific than William Frye. Although his paintings captured a record of the state's well-to-do families, Frye himself has remained largely unrecognized during the past one hundred years. But with the publication in the 1960s of new studies on portrait books from Southern states, Frye and other artists have begun to receive attention from art dealers, museums, and collectors. While pointing out Frye's signature painting styles and techniques, author E. Bryding Adams follows the life and artistic career of William Frye, from his beginnings in Alabama to the prosperous 1850s and the hard times of the Civil War. The article is accompanied by striking images of Frye's work, including both landscapes and portraits for which he is best remembered.

Additional InformationThe following article in the Encyclopedia of Alabama will also be of interest:
About the Author
A native Alabamian, E. Bryding Adams is Curator of Decorative Arts at the Birmingham Museum of Art. In 1985 she initiated the Alabama Decorative Arts Survey to examine private and public collections throughout the state for ceramics, furniture, metals, paintings, photography, and textiles made in Alabama prior to 1930. While conducting the survey, which included searches in nineteenth- and early twentieth-century newspapers, Adams and her associates uncovered information on hundreds of heretofore little-known artisans like William Frye. She welcomes additional information about Frye, his sitters, as well as information about other Alabama artisans for a forthcoming exhibition and catalog entitled "Made in Alabama: A State Legacy" opening at the Birmingham Museum of Art in October 1994.

Bryding Adams maintains a checklist of all the paintings by William Frye identified to date. A copy of that list may be obtained by writing her at the Birmingham Museum of Art, 2000 Eighth Avenue North, Birmingham, Alabama 35203-2278. 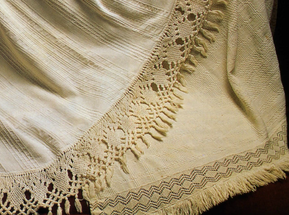 During the Nineteenth-century, counterpanes were a familiar type of bed covering in the South, a product of the cotton-producing economy of the period. This article presents the different weaves and finishes traditionally associated with handwoven counterpanes, and traces the evolution of their development as handmade objects in the midst of advancing technology to become treasured heirlooms in many Southern families.

Additional Information
Atwater, Mary Meigs. The Shuttlecraft Book of American Handweaving (Macmillan, 1940).
Eaton, Allen H. Handicrafts of the Southern Highlands(Russell Sage Foundation, 1937).
The following articles in the Encyclopedia of Alabama will also be of interest: Multimedia:
About the Author
Lee Rahe, a member of the interior design faculty at the University of Alabama, holds a Ph.D. in Human Ecology from the University of Tennessee at Knoxville and an M.A. in Housing and Interior Design from the University of Missouri at Columbia. Rahe is currently engaged in research on the residential furnishings and furnishing practices of antebellum Southerners.

The editors wish to thank Mr. Marvin Harper of Northport, Alabama, for providing several of his heirloom counterpanes and coverlet for this article and for allowing Alabama Heritage to photograph them in his home.
Back to Top

The Hopkins Pratt house, now in perilous condition, is one of the few examples of a hall-and-parlor-plan I-house remaining in Alabama. Tragically, as this issue was going to press, the Hopkins Pratt house was torn down. With its destruction, we have lost a significant part of our heritage and gained yet another sad illustration of the need for both documentation of our historic structures and public education regarding our architectural legacy.

Additional Information
The following article in the Encyclopedia of Alabama will also be of interest:
About the Author
Jeff Mansell is assistant director, Cahaba Trace Commission.
Back to Top

L.J. Davenport examines the life- and mating-habits of the green treefrog.

Additional Information
The following article in the Encyclopedia of Alabama will also be of interest: Multimedia:
About the Author
Larry Davenport is a professor of biology at Samford University, Birmingham.
Back to Top