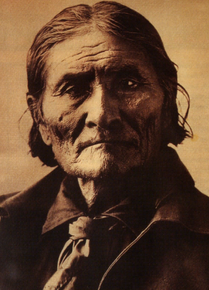 Enraged by the murder of his family, Geronimo (c. 1820-1909) terrorized the Southwest from the 1850's until his surrender in 1886. "He was one of the brightest, most resolute, determined looking men that I have ever encountered," said U.S. Gen. Nelson A. Miles. (Courtesy Rose Tree Inn, Tombstone, AZ; Reproductionby Richard Byrd, Bisbee, AZ)
Geronimo and the Chiricahua Apaches: The Alabama Years

When Geronimo and his warriors caused too much trouble on the Arizona/Mexico border, the United States Army set out to relocate the Apache tribe. Tricked into believing that he and his warriors would be reunited with their families, Geronimo surrendered to Gen. Nelson A. Miles. During a brief imprisonment in Florida, the Apaches suffered such ill health that the government relocated them to Mt. Vernon, Alabama. Here Geronimo struggled to feed his people, selling his possessions to tourists, rounding up stray children and escorting them to school, and generally keeping the peace. Once labeled “The Terror of the Southwest,” Geronimo rose to the needs of his tribe and did everything he could to secure their health and safety.

​
Additional Information
About the Author
Born in New Jersey and educated at Columbia University, New York, H. Henrietta Stockel moved to New Mexico in the early 1970s. She worked for the New Mexico Human Services Department in Santa Fe and directed welfare reform programs for Native Americans in Albuquerque. In 1988 she co-founded the Albuquerque Indian Center and became its first executive director. Since 1992 she has worked for the University of New Mexico's Health Sciences Center Library as a special projects bibliographer whose duties include compiling, managing, and directing the library's Native American Health History Database.

Currently a resident of Rio Rancho, New Mexico, Stockel is one of the nation's leading authorities on the Chiricahua Apaches. She lectures widely on their history and has published several books and more than forty articles on the Southwest and its ethnic cultures and people.
Back to Top
Images of Alabama: Country Churches

Photographer Anderson Scott shares his passion for capturing “some of the most beautiful places on earth:” country churches. He also provides some common observations about the churches he has visited in Alabama. Scott’s photography can be found at the National Museum of American Art, the Corcoran Gallery of Art, and the San Francisco Museum of Modern Art.

About the Author
Andy Scott is a photographer and lawyer originally from Montgomery, Alabama. He practices law in Atlanta and continues his passion for photography. Scott holds an undergraduate degree from Davidson College, a master's degree in an from Yale University, and a J.D. degree from Emory University.

Scott's photographs have been exhibited nationally and are in the permanent collections of the National Museum of American Art, The Corcoran Gallery of Art, and the San Francisco Museum of Modern Art, among others. He is also an art critic for the Atlanta Journal-Constitution and Art News.
Back to Top 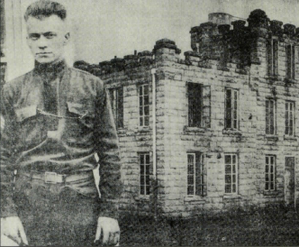 SGT. Robert J. Lancaster, whose first trial took place in the Marion County Courthouse in 1921, was convicted in 1924 of second degree murder in the death of Willie Baird. (Courtesy Alabama Department of Archives and History)
The Lynching of Willie Baird, Labor and Violence in 1921 Alabama

On December 2, 1921, Willie Baird turned himself in to the Winston County Sheriff, seeking protection from Company M of the Alabama National Guard. The Alabama National Guard had been called in to the area to “keep the peace” at a United Mine Workers of America strike. Baird had witnessed Private James Morris and Company M shoot and kill his father-in-law, Adrian Northcutt, a union leader and preacher. Baird killed Morris in self-defense, and the violence captured national attention. On January 13, 1921, nine members of Company M stormed the jail and lynched Baird on Manchester Road in Jasper. The ensuing trials against the nine members of Company M caused state and national controversy and had a major effect on Alabama’s coal miners.

Additional InformationThe following articles in the Encyclopedia of Alabama will also be of interest:
About the Author
Birmingham native Glenn Feldman holds two degrees from Birmingham-Southern College, a master's degree in political science from Vanderbilt University, and master's and doctoral degrees in history from Auburn University. Feldman has taught at The Altamont School and Our Lady of Sorrows School, both in Birmingham, and is currently an assistant professor at the Center for Labor Education and Research, University of Alabama at Birmingham.

Feldman's book, From Demagogue to Dixiecrat: Horace Wilkinson and the Politics of Race, was published by the University Press of America in 1995.
Back to Top 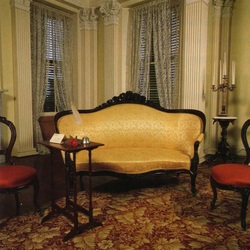 The parlors of antebellum Alabamians served as ornate and beautiful places to read, gather with company, or bond with family. The design of such parlors was strictly dictated by such publications as Godey’s Lady’s Book and Magazine, which gave advice on everything from fashionable carpet fabrics to chair and table designs. These antebellum parlors often reflected high fashion; the wealthiest planters owned costly pianos and tête à têtes, lounges that “allowed two occupants to face each other without physical contact.” These rooms shed light into the daily lifestyles of rich antebellum families.
Buy This Feature
Additional Information
The following articles in the Encyclopedia of Alabama will also be of interest:
Multimedia:
About the Author
Texas native Lee Rahe, a member of the interior design faculty at the University of Alabama since 1979, holds a Ph.D. in Human Ecology from the University of Tennessee at Knoxville, an M.A. in Housing and Interior Design from the University of Missouri at Columbia, and a B.A. from the University of Texas at Austin. Much of the information in this article comes from Rahe's dissertation, "Residential Furnishings of Deceased Greene County (Alabama) Slave Owners: 1845-1860."

The editors wish to thank the Alabama Historical Commission and the docents at Magnolia Grove and Gaineswood for allowing us to photograph these two historic homes.
Back to Top

Rembrandt Peale (1778-1860), one of early America's most renowned Romantic artists, painted portraits of many distinguished figures, including Thomas Jefferson and George Washington. His portrait of Jean Simon Chaudron displays qualities typical of Peale's work. The flesh tones are deep and rich. The eyes, nose, mouth and hair are carefully rendered and detailed. During the winter of 1995,  the painting was restored to "gallery standards," and was unveiled at the Mobile Museum of Modern Art in 1996.

Additional Information
The following articles in the Encyclopedia of Alabama will also be of interest:
About the Author
John Sledge is an architectural historian with the Mobile Historic Development Commission.
Back to Top

Additional Information
The following articles in the Encyclopedia of Alabama will also be of interest:
About the Author
Larry Davenport is a professor of biology at Samford University, Birmingham, Alabama.
Back to Top