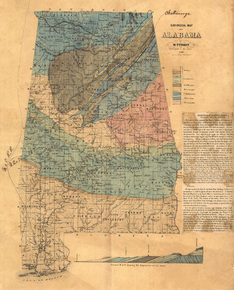 This map was created
by Alabama's first State Geologist,
Michael Tuomey.
The W.S. Hoole Special Collections Library,
The University of Alabama)
The Land of Alabama: A Field Trip


Alabama’s natural beauty often evokes sighs of content and exclamations of amazement from beachgoers, hikers, and others. However, few of us are able to articulate the complex forces that combined to make this state’s terrain what it is today. John Hall tackles that challenge, tracing Alabama back through millions of years in order to explain how the land gained the characteristics we see—and some we can’t see—today.


Buy This Feature
Additional Information
For more information on the diversity of Alabama’s geology, please visit the website Encyclopedia of Alabama).

About the Author
John C. Hall is a frequent contributor to Alabama Heritage, where he has written on Hernando de Soto, William Bartram, Prince Madoc, and the Sylacauga Meteorite. He is a retired naturalist at the Alabama Museum of Natural History and is currently director of the Black Belt Museum at the University of West Alabama. He has practiced telling this story for many years at the museum, Shelton State Junior College, and most recently at the Alabama Department of Archives and History’s new exhibit, “The Land of Alabama.” With environmental photographer Beth Maynor Young, he is the coauthor of Headwaters, A Journey on Alabama Rivers (University of Alabama Press, 2009), and he is currently one of the authors (again with Young’s photographs) of the recent Longleaf: As Far as the Eye Can See (University of North Carolina Press, 2012). He appreciates the help of geologists Andrew Rindsberg and James Lamb, and the staff of the state archives.
Back to Top 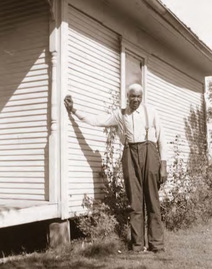 Josh Miles, one of the interviewees.
(Library of Congress)
Slave Fighting in the Old South

For many years, anecdotal evidence suggested that slaves on southern plantations engaged in wrestling or fighting matches. The publication of the slave interviews collected by the Federal Writers Project of the Works Progress Administration finally confirmed what had long been only suspected: the matches actually occurred. These first-hand accounts prove that in Alabama and throughout the South, slave fighting transpired often and for many reasons, offering the enslaved men a chance to prove their masculinity, settle disagreements, and sometimes even add to their owners’ profits. The events became a central part of a plantation’s social life, and they were both celebratory and recreational—even as they expressed another facet of the violence of slavery.

Additional Information
For more about slave fighting, the author suggests the following books:

About the Author
Sergio Lussana completed his PhD in history at the University of Warwick in 2011. He is currently visiting lecturer at Royal Holloway University of London. His dissertation explored the ways in which enslaved men of the antebellum South negotiated masculine identities, formed friendships, and resisted their enslavement. He has written an article for the Journal of Southern History, and his article on enslaved male friendship and resistance is scheduled for publication in the 2013 issue of the Journal of Social History. He is coeditor of Black and White Masculinity in the American South, 1800–2000 (2009). 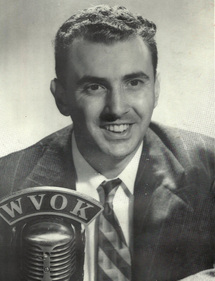 In a career that began in 1941 and spanned four decades, Birmingham’s Joe Rumore became one of the most prominent radio personalities of his era, and he redefined radio in the process. Rumore’s savvy business sense helped, but the real impetus behind his success was his genuine concern for others and his willingness to open his life and home to help the people in his community. Rumore’s fame and approachability were so strong that he received letters from POWs during World War II, visits from celebrities such as Hank Williams and Andy Griffith, and, one year, over forty thousand Christmas cards. Author Wendy Reed takes us through the story of Rumore’s life and its significant effect on both his industry and his community.

Buy This Feature
Additional Information
For more materials on Rumore, including audio clips from his program, please visit the website.

Click below for a three-part interview with Joe Rumore's son, Phillip, on the "Rick and Bubba" radio show.
About the Author
Wendy Reed received her PhD from the University of Alabama, where she also was a producer/director for the Center for Public TV and Radio on the series Bookmark, Discovering Alabama, and The Alabama Experience. She is an Alabama State Council on the Arts fellowship recipient, winner of two Emmys and a Unity Award, and co-editor of Circling Faith: Southern Women on Spirituality and All Out of Faith: Southern Women on Spirituality (University of Alabama Press) with Jennifer Horne. Most recently her book An Accidental Memoir: How I Killed Someone and Other Stories was published by NewSouth Books. Currently she blogs for Freshfully.com and is a freelance writer/producer. Reed lives with her husband in Waverly, Alabama. ​
Back to Top 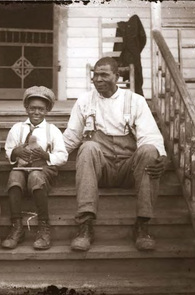 Mitch Shackelford and an unidentified boy.
(Birmingham Public Library)
Both Sides of the Lens: Photographs by the Shackelford Family, Fayette County, 1900–1935

In the early twentieth century, when the lives of most African Americans were still ignored in many mainstream media, one Fayette County family worked to preserve details of everyday life in Alabama. Along with their children, Mitch and Geneva Shackelford took nearly one thousand photographs of African Americans, using this relatively new technology to capture and celebrate the quotidian—and leaving behind valuable records of rural life in Alabama. Thanks to the Birmingham Public Library, where many of the Shackelfords’ negatives are now housed, the readers of Alabama Heritage may see these revealing and moving portraits taken nearly a century ago.

Buy This Feature
About the Author
Andrew Nelson is a PhD candidate in American Studies at the University of Maryland. His research interests include visual culture, popular music, and the cultural history of the American South. He teaches courses in American culture, history, and material culture. Before turning his focus to research and teaching, Nelson worked in the nonprofit sector for the Fair Labor Association and the Arts Education Partnership. Recently, he curated the traveling exhibition Both Sides of the Lens: Photographs by the Shackelford Family, Fayette County, Alabama, 1900–1935 in collaboration with the Birmingham Public Library’s Department of Archives and Manuscripts. A Birmingham native and graduate of Birmingham-Southern College, Nelson is currently writing a dissertation that provides an in-depth exploration of the broader cultural and historical significance of the Shackelford family’s photographs in the early twentieth century.
Back to Top 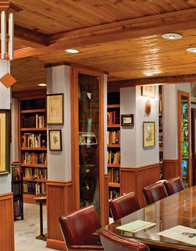 Chris and Harriet Amos Doss
have one of the largest
personal libraries in Alabama.
(Robin McDonald)
Revealing Hidden Collections
An Eden in Hoover: A Visit to the Doss Library

This quarter, our tour of special collections throughout Alabama takes us to the home of Chriss and Harriet Amos Doss, a Birmingham couple whose profound love of books has led to the creation of a home library unlike any other. Complete with rare and valuable books, historical objects, family memorabilia, and even a stained glass window commemorating Alabama history, the Doss’s library offers a powerful tribute to the couple’s love of learning, literature, and their home state.

About the Author
Scotty E. Kirkland is curator of history at the History Museum of Mobile. Louis A. Pitschmann, standing editor of the "Revealing Hidden Collections” department of Alabama Heritage, is dean of the University Libraries at the University of Alabama and director of the Alabama Center for the Book, which cosponsors this department. 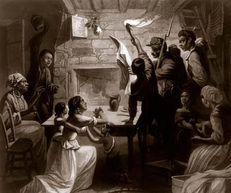 In this quarter’s installment of Becoming Alabama, Joseph Pearson explores the mounting divisions within the Creek Indian community, as Big Warrior and Little Warrior exhibit varying ideological approaches to their people’s place in the territory. Megan Bever looks at the origins of the Emancipation Proclamation and its immediate effect on the war and contemporary citizens. And Matthew Downs traces that document’s legacy, considering the way it was (or, in some cases, was not) celebrated one hundred years later. Throughout, each author approaches a crucial time in the state’s history and explains how it helped shape the Alabama we know today.

Additional Information
For more on the Emancipation Proclamation, visit the National Archives. 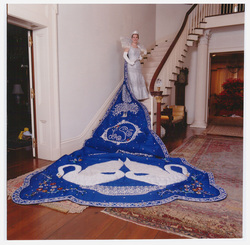 Each year at Mobile’s Mardi Gras festivities, ladies display their finest gowns, complete with elaborate trains. For years, one woman has been responsible for many of these lavish ensembles. A transplant to the South, Karen Thornton has earned her way into the hearts—and closets—of many Alabama elite, who display her legacy through each sequin and stitch. 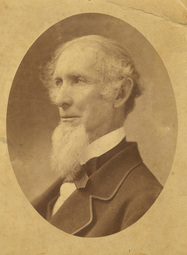 In the mid–nineteenth century, a handful of medical professionals sought to synthesize their scientific beliefs with their spiritual and social beliefs. One target of their focus was slavery, and heated debates arose around what people considered the proper place of African Americans within their scientific and religious worldview. Although these discussions often seem antiquated to contemporary readers, they reveal significant information about the attitudes and assumptions of our forbears, and they reflect individuals using every available tool—from medicine to religion—to make sense of their world and others in it.

About the Author
Christopher Willoughby grew up in Birmingham, Alabama. He received a master’s degree in history in the spring of 2012 from Tulane University, where he is currently working on his doctorate. He resides in New Orleans’s Lower Garden District. Joshua D. Rothman, standing editor of the “Southern Religion” department of Alabama Heritage, is associate professor of history at the University of Alabama and director of the university’s Frances S. Summersell Center for the Study of the South, which sponsors this department. 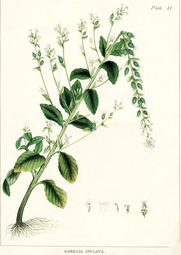 Although known by several names, from the scientific--Lobelia inflata—to the common—Indian tobacco—the topic of this quarter’s Nature Journal has one distinctive colloquial appellation that readers are likely not to forget: puke weed. That name sounds like enough to keep wary people away from the innocuous-looking plant, but throughout history, puke weed has actually been used by a number of savvy marketers to promote health systems of varying degrees of medical soundness. Larry Davenport explores puke weed and the men who have profited from it—while reminding readers to steer clear of it themselves.

About the Author
Larry Davenport is a professor of biology at Samford University. This column, running since 1993, inspired his book Nature Journal(University of Alabama Press, 2010).

Back to Top
Reading the Southern Past
Rethinking the Life and Legacy of Booker T. Washington

In this quarter’s book review column, Stephen Goldfarb revisits the life and legacy of Booker T. Washington, tracing the varied responses to him at different points in American history, and looking at books that evaluate him afresh for the twenty-first century. Goldfarb considers two biographies—Robert J. Norrell’s Up From History: The Life of Booker T. Washington (Harvard University Press, 2009) and Booker T. Washington: Black Leadership in the Age of Jim Crow (Ivan R. Dee, 2009) by Raymond W. Smock—and the Norton Critical Edition of Washington’s Up From Slavery, composing a new appraisal of the Alabamian whose appearance at the 1903 Atlanta Exposition changed history.