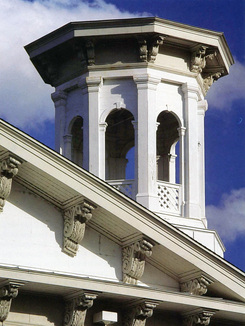 Subtle exterior color differentiation, such as
the stark white of the body of the building and
the warm white or putty color of the eaves and
eave brackets, were frequently employed
during the mid-19th century.
(Photo courtesy Chip Cooper)
Mobile's City Hall

The history of Mobile's City Hall is a difficult one. Built at great expense in a city that was struggling financially, the building--itself a thing of beauty--became the target of disgust at civic corruption. Renovated three times over the course of its history, the  building was damaged in 1979 by Hurricane Frederic. This is the story of Mobile's City Hall--from its troubled beginnings through multiple renovations until its final restoration in 1982.

Additional Information
Buy This Feature
About the Author
Nicholas H. Holmes, Jr., has been a practicing architect in Mobile since the 1950s. He received a bachelor of architecture degree from Auburn University in 1949, studied architectural design as a postgraduate at the Royal Danish Art Academy in Copenhagen, and in 1978 he was advanced to fellowship in the American Institute of Architects. Long interested in historic preservation and archaeology (he is an accredited member of the Society of Professional Archaeologists), Holmes, for almost twenty years, has served on the A.I.A. 's Committee on Historic Resources and as A.I.A.' s Preservation Coordinator for Alabama. He is presently at work restoring another national historic landmark, the Alabama state capitol.

The author would like to thank Mr. Roy V. Tallon, registrar of the Museum of the City of Mobile, and Mrs. Joan Hartwell and Mrs. Nancy Holmes, both of the Historic Mobile Preservation Society, for their assistance in sifting through early Mobile newspapers. The editors would like to thank Terry L. Carraway and Caldwell Delaney for their assistance in obtaining photographs.
Back to Top 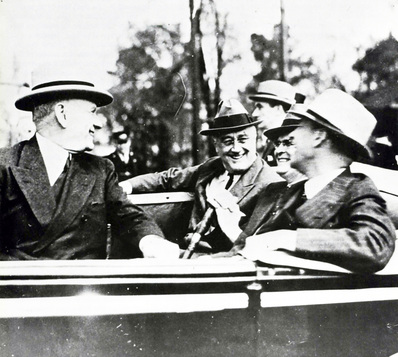 Lister Hill served in the Congress of the United States for forty-five years, longer than any other Alabamian and longer than all but seven members in the entire history of Congress. In so doing, he earned the respect of his colleagues as well as the seniority that enabled him to play a leading role in creating more than eighty pieces of major legislation. Throughout his lengthy career, however, Hill met with determined opposition in his home state. Virginia Van der Veer Hamilton's biography of Hill addresses these and other dilemmas faced by a Deep South progressive during an era of far-reaching social and political change. This article is made up of excerpts from Lister Hill: Statesman from the South that illuminate aspects of Hill's youth and early political career.

Additional Information
Sources for Hamilton's biography of Hill include the Lister Hill Papers, a 1,875,000-piece collection housed at the William Stanley Hoole Special Collections Library, University of Alabama, and the immense clipping file on Senator Hill located in the Alabama Department of Archives and History in Montgomery.

About the Author
Virginia Van der Veer Hamilton, Professor Emerita in history at the University of Alabama at Birmingham, where she
taught for twenty-two years, received her A.B. and M.A. degrees from Birmingham-Southern College and her Ph.D. degree from the University of Alabama. Hamilton, a frequent contributor to American Heritage and the New York Times Travel Section, is the author of numerous scholarly articles and six books, including two Alabama history textbooks, the official bicentennial history of Alabama, a guidebook to the state's historic sites, and a study of the Alabama political career of Hugo L. Black. Her latest book, Lister Hill: Statesman from the South, will be published this November by the University of North Carolina Press, P.O. Box 2288, Chapel Hill, NC 27514.

In her introduction to the Hill biography, Hamilton writes: "At the end of his strenuous 1944 campaign for reelection, Hill complained to his campaign manager, Roy Nolen: 'The story ought to be told .... it is a historical chapter which should be put in black and white for all time. ' To aid any future historian who might essay this task, Hill left a monumental written record, one that he never attempted to edit, purge, or partially destroy. When I began to search out his story, it was all there, the accomplishments, the flaws, the trivia. This book emerged primarily from this rich resource."

Back to Top
Big Mama Thornton


Elvis Presley's rendition of "Hound Dog" may have been a hit for the rock legend, but its origins are far more interesting than the sanitized lyrics would suggest. "Hound Dog" belonged originally to a rhythm and blues singer from Montgomery, Alabama, who, at the time of Elvis' recording, was making her living on what black entertainers called "The Chitlin' Circuit." Tipping the scales in her prime at more than 350 pounds, she was also endowed with a big voice and imperious manners, all of which led to the creation of her stage name--Big Mama Thornton. This is her story.

Additional Information
Big Mama Thornton's first recording, "Bad Luck Got My Man," issued in 1949 by The Harlem Stars on the E&W label, is a hard-to-find collector's item. The same is true for almost all of her subsequent single recordings, including the original "Hound Dog," issued as a 78 rpm recording on the Peacock label, and 45 rpm recordings issued in the 1950s and '60s on the West Coast labels of Bay Tone, Sotoplay, Carolyn, Speed, Galaxy, Movin, and Kent.

Of her long-playing albums, the most easily available (and one of the best) is an import from England, "Quit Snoopin' Round My Door" (Ace 170). Also available from specialty stores is the excellent 1965 recording, "In Europe" (Arhoolie 1028). Other available long-playing recordings by Thornton include "Ball and Chain" (Arhoolie 1039), "Chicago Blues" (Arhoolie 1032), and two recordings documenting her "comeback years" before her health failed--"Jail," recorded live in a prison concert (Vanguard 79351) and "Sassy Mama" (Vanguard 79354). The only available recording of Thornton on compact disc is "Live at Newport" (Intermedia 5022).

About the Author
Ben Windham, assistant managing editor of the Tuscaloosa News, is a native of Selma and a graduate of Birmingham-Southern College. Born into a family of journalists, he has been a professional newspaperman for the past seventeen
years. Windham, an ardent record collector, became interested in the blues as a teenager, when John Lee Hooker
and Jimmy Reed recordings were in vogue at his high school and when B. B. King and Lowell Fulson still played
occasional dates in Selma.

The author and the editors wish to thank Johnny Otis for his photographs and his assistance with this article.
Back to Top 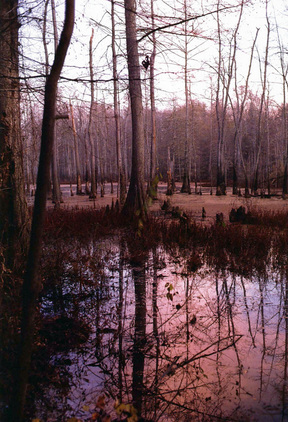 Cooper, a native of Huntsville, particularly enjoys photographing landscapes. "Color, and especially light, make the picture work, II he says. "I work a long time setting up all my equipment--and I carry a lot of it--and then wait for just the right moment, when the lighting, contrasts, and textures all come together."

In February 1987 Cooper was one of two photographers featured in a PBS documentary, "Captured: Chip Cooper, Spider Martin, Photographers," produced for Alabama Public Television and aired statewide. Cooper's work has been featured in The University of Alabama: A Pictorial History by Suzanne Rau Wolfe (University of Alabama Press, 1983), and in Mine, Mill, and Microchip: A Chronicle of Alabama Enterprise by Wayne Flynt (Windsor, 1987). Hunting: The Southern Tradition, a volume of Cooper's photographs, with text by May Lamar and Rich Donnell (Taylor Publishing Company, 1987), appeared this fall.
Back to Top