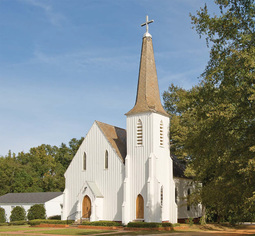 As Alabama moved into its statehood, the landscape shifted to reflect the needs of its growing population. In some cases, settlers constructed whatever seemed expedient, but in other instances--including Episcopal churches throughout the new state--people thought a great deal about how a building’s design could influence its use. Stephen McNair explores this trend, explaining the idea behind the Ecclesiological Gothic--the school of thought that states that church architecture should reflect the very practices of its parishioners--and highlighting several of Alabama’s significant church buildings.

Buy This Feature
About the Author
Stephen McNair, Ph.D., is an architectural historian and historic preservationist with over ten years of experience in the American South and United Kingdom. He is the author of Southern Gothic: Antebellum Ecclesiology in Alabama, Louisiana, and Mississippi and various articles on the relationship between the Gothic Revival and Anglicanism. Before moving back to Alabama in 2013, McNair served as the Director for Preservation Advocacy and Outreach for the Cockburn Association, Scotland's oldest Historic Preservation organization, and lectured on global architectural history at the University of Edinburgh. Before moving abroad, McNair served as an Architectural Historian for the Vieux Carré Commission and Historic District Landmarks Commission in New Orleans. A native of Mobile, McNair received a Bachelor of Arts from the University of Alabama, a Master's in Historic Preservation from the Tulane University School of Architecture, and a Doctorate in Architectural History from the University of Edinburgh. 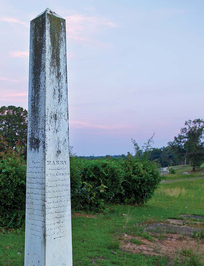 A modest obelisk in the Marion City Cemetery commemorates the heroism of Harry, a 23-year-old slave who gave his life awakening sleeping Howard College students when their dormitory caught on fire. (Courtesy Robin McDonald)
Harry: Faithful Unto Death

In October 1854 Lincoln and Douglas held the first of their now-storied debates. And a dormitory fire broke out at Howard College, then located in Marion, Alabama. Although not related in any overt way, both of these events offer insight into the tensions that were then building across the nation. In Marion, Harry, a slave owned by the college president, rushed into the dorm to save students, ultimately sacrificing his own life to save theirs. As the town of Marion and the college community determined how best to commemorate this slave’s action, the nation continued its divisive path toward war.
Buy This Feature
About the Author
Christopher Lyle McIlwain Sr. is a Tuscaloosa, Alabama, lawyer and president of the firm Hubbard, McIlwain, and Brakefield, P.C. He was born in Chattanooga, Tennessee, in 1955, raised in Huntsville, Alabama, and received his undergraduate (1977) and law (1980) degrees from the University of Alabama. His primary historical interest is nineteenth-century Alabama, and he has a forthcoming book on the Civil War experience in Alabama that will be published by the University of Alabama Press. 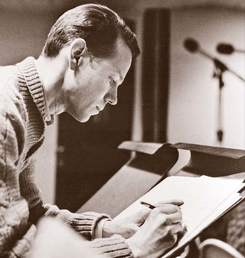 Hugh Martin works on a score in a recording studio in 1960. (Courtesy Suzanne Hanners)
“Such a Lovely Gift”: Hugh Martin’s Musical Legacy

If you’ve ever seen Meet Me in St. Louis or The Wizard of Oz, chances are you’ve enjoyed the music of Hugh Martin. Martin, an Alabama native who trained at the Birmingham conservatory, soon moved to New York and California, where he established himself as a noted figure in film and musical circles. He befriended Judy Garland, who appreciated his musical talents--but not always his advice. After trauma from his service in World War II, Martin stepped away from show business, eventually moving to California, but he thought about music until the end of his life.

About the Author
Maridith Walker Geuder, a Mississippi native, holds a bachelor’s degree from Millsaps College and a master’s degree from the University of Alabama, both in English. She has held positions at Southern Living magazine in Birmingham and Texas Monthly magazine in Austin, Texas, working in advertising promotion. For more than twenty-five years, she has worked in higher education, marketing, and communication, in positions at The University of Alabama, Mississippi State University, and Mississippi University for Women. She currently is Executive Director for University Relations at Mississippi University for Women, where she serves on the President’s Cabinet. This is her fourth article for Alabama Heritage. She lives in West Point, Mississippi, in her 1913-era childhood home. 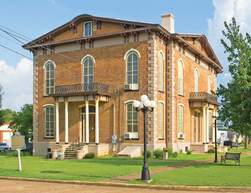 The third Carrollton County Courthouse was built in 1877, to replace one burned down in mysterious circumstances a year earlier. (Courtesy Robin McDonald)
A Portrait in the Pane: Lightning Photography and the Carrollton Courthouse Window Legend


Thanks to the rich storytelling abilities of Kathryn Tucker Windham, most Alabamians know the story of Carrollton and the face that haunts its courthouse window. Or at least they think they know the story. In actuality the courthouse window legend remains a historical and scientific mystery that illuminates how nineteenth-century Alabamians saw their community, new technological and scientific developments, and their relationship to the natural world.
Buy This Feature
About the Author
Will McCarry is a freelance writer based in Leesburg, Virginia. He graduated from the University of Mary Washington in 2013, and is a former intern of Alabama Heritage. Currently, McCarry works in the development department at Morven Park in Leesburg, a historic site dedicated to the life and mission of former governor Westmoreland Davis. He also is the lead singer and songwriter of emerging folkrock band Save the Arcadian, which is working on a new album scheduled to be released early spring 2015.

The Robinson House, c. 1896, in the Five Points South Historic District on the south side of Birmingham. (Courtesy Robin McDonald)
Southern Architecture and Preservation
Of Carrots and Sticks: The National Register of Historic Places


In the five decades of its existence, the National Register of Historic Places has recognized a number of historically significant structures throughout the United States. However, its role in historic preservation remains somewhat mysterious to many people. Susan Enzweiler illuminates the work of the register, explaining its purpose and mission--and how it can help with your own preservation needs. 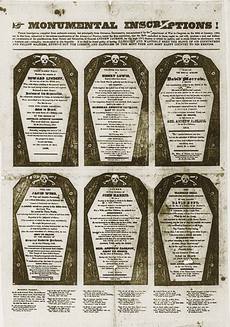 Jackson’s execution of the six militiamen was used against him in the presidential election of 1828. This handbill claimed the men had left believing their tour of duty had ended. (Courtesy Library of Congress)
Becoming Alabama
Quarter by Quarter


This installment of “Becoming Alabama” revisits the desertion of troops from the War of 1812, the waning days of the Civil War and the reactions of everyday Alabamians to the changes sweeping their nation, and the events fifty years ago in Selma. In each case these tumultuous and often violent events held repercussions that helped shape both the state and the nation.

About the Authors
Megan L. Bever is assistant professor of history at Missouri Southern State University. Her dissertation, completed at the University of Alabama, explores alcohol, morality, and citizenship in the Civil War era.

Matthew L. Downs (PhD, Alabama) is an assistant professor of history at the University of Mobile. His dissertation focused on the federal government’s role in the economic development of the Tennessee Valley.

Joseph W. Pearson is assistant professor of history at Union College. His dissertation, completed at the University of Alabama, explores the political culture of the American Whigs, specifically probing the shared underpinnings of their political thought and moral temper across class, gender, and section. 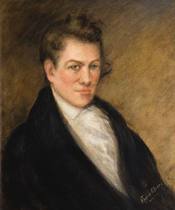 Israel Pickens was the first governor of Alabama to serve a second term. (Courtesy Alabama Department of Archives and History)
Alabama Governors

Israel Pickens, Alabama’s third governor, relocated to the state from North Carolina, where he had held a distinguished political career. Extremely popular with citizens, Pickens proved most significant for his policies on economics and the role of banking.

A restroom sign from a segregation-era L&N railway station. (Courtesy Alabama Department of Archives and History)
From the Archives
The Long Arc of Civil Rights History in Alabama

As the nation commemorates the fiftieth anniversary of a crucial year in its civil rights history, Alabama Heritage reflects on the various roles the state has played in this history. Steve Murray guides readers through the collection at the Alabama Department of Archives and History, highlighting artifacts that reflect the complicated yet significant role Alabama played in the civil rights movement.

About the Author
Steve Murray is the director of the Alabama Department of Archives & History.
Back to Top 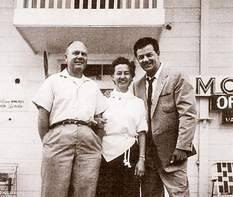 By Whitney A. Snow

For a brief period in the late 1950s, a small Alabama community felt like Hollywood--at least to its residents. When film executives decided to use Cathedral Caverns, near Guntersville, as the site of a new movie, the community blossomed, filling with directors and actors. Many citizens befriended the actors, who entered into everyday Alabama life--to a point. The film was never actually made, leaving Cathedral Caverns and its cinematic potential untapped. For Guntersville residents, though, the excitement remained.

About the Author
A native of Guntersville, Whitney Snow is an assistant professor of history at Midwestern State University in Wichita Falls, Texas. 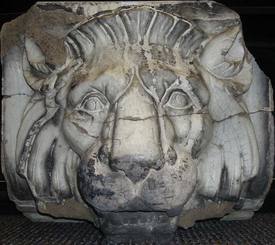 For decades, Birmingham lacked a site dedicated to its own history. As officials have worked to change that, collection items have poured in, being donated from a number of significant sources, but also appearing in such incongruous places as a trash receptacle. As items accumulate the History Center seeks a space in which to display its growing collection.


This quarter’s installment of “Reading the Southern Past” explores Alabama’s role in World War I, considering two primary texts on that subject. Nimrod T. Frazer’s Send the Alabamians: World War I Fighters in the Rainbow Division (University of Alabama Press, 2014) offers a deep history of the 167th (Alabama) Infantry Division and its significant role in the war, including its remarkable service in the Battle of Croix Rouge. The Great War in the Heart of Dixie: Alabama During World War I, edited by Martin T. Olliff (University of Alabama Press, 2008), offers a broader picture of the state’s wartime conditions and circumstances. Taken together, these books provide a telling depiction of Alabama’s wartime roles.