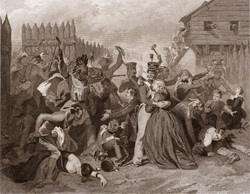 The attack on Fort Mims remains the most
misunderstood conflict of the war
(Alabama Department of Archives and History)
Clash of Cultures: The Creek War in Alabama

By Mike Bunn and Clay Williams

Perhaps few events occurring in the lands that would become Alabama held such national importance as the original Creek War, which shocked Americans and held drastic consequences for the Creek Nation. Inspired by Tecumseh, a group of renegade Creeks called the Red Sticks harassed American settlers and assimilated Creeks in 1813, creating a climate of escalating violence vividly demonstrated at the attack on Fort Mims and reaching its full expression in the Creek War. Led by Andrew Jackson, American troops finally subdued the Red Sticks, propelling him to lasting fame and the U.S. presidency. But the struggle displaced many members of Creek nation, opening their lands to white settlers and eventually forcing the Creek Nation on its “Trail of Tears.”

About the Author
Mike Bunn has served as the Associate Curator of History at the Columbus Museum since 2004. He has worked with the Alabama Historical Commission, the Tuscaloosa County Preservation Society, and the Mississippi Department of Archives and History. He earned a BA in history from Faulkner University and MA’s in history and higher education administration from the University of Alabama. Bunn has authored numerous exhibition catalogs, articles, and book reviews, and is co-author of two books: Images of America: Lower Chattahoochee River, and the recently released Battle for the Southern Frontier: The Creek War and the War of 1812, which was co-authored with Clay Williams. He was recently named to the Board of Directors of the Historic Chattahoochee Commission. Mike and his wife, Tonya, live in Columbus. 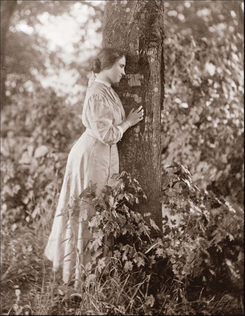 Many images of Keller as a young woman
show her interacting with the natural world
(Library of Congress)
The Grown-Up Helen Keller: “Goodwill Ambassador to the World”

Although most people know Helen Keller for her childhood achievements—learning signed communication through the help of her teacher Anne Sullivan—few people know of Keller’s later life and the many accomplishments it contained. Keller never let her deafness and blindness impede her ambitions, and after graduating from Radcliffe (in an age when few women attended college at all), she established herself internationally as a famous and effective human and civil rights leader. Keller considered this some of her most important work, and she traveled extensively on behalf of the American Foundation for the Blind, visiting such far-flung countries as Egypt and Japan and enjoying audiences with many U.S. Presidents. Much more than an afterthought, Keller’s adult advocacy forms a substantial and influential aspect of her life as a person engaged in the world beyond her.

About the Author
Historian Kim E. Nielsen is an award-winning educator and the author of many books. These include The Radical Lives of Helen Keller and, most recently, Beyond the Miracle Worker: The Remarkable Life of Anne Sullivan Macy and Her Extraordinary Friendship with Helen Keller. She also edited Helen Keller: Selected Writings. Nielsen lives in Green Bay, Wisconsin, where she is professor of history and women’s studies at the University of Wisconsin–Green Bay. 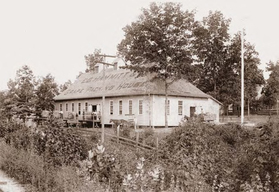 As the turn of the twentieth century approached, Alabama developed what would become a noted wine community. Though short-lived, Fruithurst, located about halfway between present-day Birmingham and Atlanta, was home to a hundred varieties of grapes. A booming tourism industry followed, immigrants flocked to the area from other locals, and for a time, Fruithurst enjoyed social and economic bounty. Several of the town’s wines were exhibited nationally, and the vineyards prospered from the attention. What looked like a sure success, however, was doomed by a confluence of environmental and social factors, from unexpected freezes to poor management. The advent of prohibition put a seeming end to Alabama’s wine experiment. But today a new vineyard celebrates Fruithurst’s history and legacy by producing muscadine wine on land that was first recognized as Alabama’s wine county nearly a century ago.

About the Author
Mary Stanton is a historian whose primary interest is white civil rights activism. She has written four books about the movement years in Alabama. Stanton has taught at the University of Idaho, the College of St. Elizabeth, and Rutgers University. Her articles have appeared inSouthern Exposure, Gulf South Historical Review, Alabama Heritage, Callaloo, Studies in Religion, and Southern Jewish History. She lives in New York City and works as an administrator for the Town of Mamaroneck in Westchester County. Sources for this article include Fruithurst: Alabama’s Vineyard Village, the New York Times, and the Anniston Star. 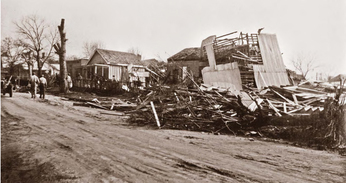 On a March day in 1932 fifteen tornados struck West Alabama in a span of five hours, creating a chaotic environment in a land already struggling with the hardships of the Great Depression. In Northport alone, a series of tornados killed nearly forty citizens, leveled three hundred buildings, and generally wreaked havoc on the area. A single F4 cyclone in Sylacauga killed forty-one and injured 325—along with extensive property damage along the city’s main streets. Community members banded together to respond to the wreckage, uniting in the face of disaster. Though this series of storms ranks as the worst natural disaster in Alabama history, it has virtually disappeared into obscurity until now. From newspaper accounts and interviews with survivors, Katie Cole recreates one of Alabama’s darkest days.

About the Author
Katie Cole is a native of Eufaula, Alabama. She holds a BA in English and a MA in journalism, both from the University of Alabama, where she also worked as a writing instructor and a research assistant. A three-year veteran of the Alabama Heritage editorial team, Cole also wrote “Buford Boone: The Price for Peace,” which appeared in issue no. 85 of the magazine. She would like to thank Dr. Kim Bissell, Dr. Matthew Bunker, Dr. Meg Lamme, Camille Elebash, and Mollie Baker for their help developing this article. Readers with stories or images of the 1932 tornados can contact the author. 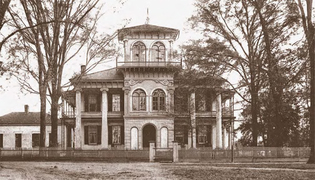 By Susan Haynes and Suzanne Wolfe

Constructed nearly 175 years ago by Dr. John R. Drish, Tuscaloosa’s Drish House has a storied past as a residence, auto garage, and church meeting place. The subject of a famous Walker Evans photograph and of ghost stories passed among local children, time and the elements have taken a toll on the once-grand plantation home. Efforts to preserve this historic structure are being coordinated by the Tuscaloosa Preservation Society. Hopefully with help from the community, the Drish House will soon return to its former glory as a showpiece of Tuscaloosa’s historical landscape.

About the Author
Susan Haynes is the executive director of the Tuscaloosa County Preservation Society. Suzanne Wolfe serves on the TCPS board of directors and was the founding editor of Alabama Heritage. Robert Gamble and Melanie Betz Gregory, architectural historians for the Alabama Historical Commission, serve as the standing editors of the "Southern Architecture and Preservation" department of Alabama Heritage.
Back to Top 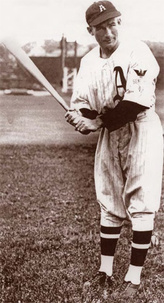 In the 1930s, Opelika native Edwin “Alabama” Pitts made a name for himself as a baseball player, even though he was a prisoner at Sing Sing. Upon his parole, he was signed to play professional baseball, opening a debate about the role of convicts in society. His career in both professional baseball—which he played until his death—and football helped him forge an identity after serving his prison term and also paved the way for future athletic endeavors of ex-cons.

About the Author
Jerry Armor, PhD, is Associate Professor of Justice Studies at Athens State University and an alumnus of the University of Alabama.
Back to Top 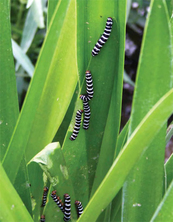 When naturalists notice something ravaging the swamp lily population, a hunt ensues to track down the culprit—the appropriately named Convict Caterpillar. Follow naturalist Larry Davenport and his colleagues as they track down these mystery creatures on the banks of the Cahaba.

About the Author
Larry Davenport is a professor of biology at Stanford University, Birmingham, Alabama.
Back to Top
Reading the Southern Past
Injustice Rendered: Leo Frank and the “Scottsboro Boys”

In this quarter’s “Reading the Southern Past,” Stephen Goldfarb reviews several books investigating two of the South’s most memorable legal cases—memorable for their failure to render justice. Leonard Dinnerstein’s book The Leo Frank Case, first published in 1966 and reprinted in 1987 by the University of Georgia Press, charts the murder charges leveled against Frank, a Jewish factory manager who was subsequently abducted from prison and lynched. A more contemporary investigation of the case appears in And the Dead Shall Rise by Steve Oney, published in 2003 by Pantheon Books. Two other books—Dan T. Carter’s newly revised Scottsboro: A Tragedy of the American South (Louisiana State University Press, 2007) and James Goodman’s Stories of Scottsboro (Pantheon, 1997) revisit the case of the “Scottsboro Boys,” the group of nine African American males falsely accused of rape in 1931. Four of them—the luckiest of the nine—were eventually released from prison for lack of evidence after being incarcerated for six years. Not even the retraction of one of the two accusers in the case brought freedom to the unluckiest of them. Goldfarb reveals what each of the four books adds to the stories of these fascinating cases.