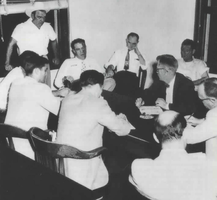 On June 20, 1954, Attorney General Silas Garret (seated at head of table) held a press conference in the Russell County Courthouse. Behind him (leaning on the window sill) is Chief Deputy Sheriff Albert Fuller. Both Garrett and Fuller were later indicted for the murder of Albert Patterson. Fuller was found guilty; the case against Garrett was eventually dropped. (Courtesy Birmingham Public Library)
When Good Men Do Nothing: The Murder of Albert Patterson

On the night of June 18, 1954, Alabama Senator Albert Patterson left his law office in Phenix City and headed home. Patterson, then the Democratic nominee for state attorney general, never reached his destination. As he approached his car, parked in a downtown alley, he was shot. Stumbling from the alley, Patterson collapsed in front of a dress shop and died. His son, convinced that the murder was due to his father's involvement in running the gangsters out of Phenix City and Russell County, embarked on a crusade to solve the mystery of his father's death. The trials that followed did little to convict a killer, although the publicity surrounding the case helped in a general clean-up of Phenix City.

Additional InformationSee also the Papers of Gov. Gordon Persons, the Papers of Gov. James Folsom, and the trial testimony in Fuller v.
State (Supreme Court of Alabama, 12 February 1959, 6 Div., 917), all located in the Alabama Department of Archives and History, Montgomery. Additional information can be found in the Alabama and Georgia newspapers that covered the events on a daily basis, the most extensive coverage coming from the Columbus (Georgia) Herald-Dispatch,  Montgomery Advertiser, Birmingham Post-Herald, and Birmingham News. The Birmingham Public Library Archives also has a three-volume scrapbook of local newspaper clippings on the subject.

The following article in the Encyclopedia of Alabama will also be of interest:Multimedia:
About the Author
Alan Grady is the lead contract historian for NASA's Marshall Space Flight Center in Huntsville. Given his education--B.S. in political science, Jacksonville State University; M.A. in history, University of Alabama in Huntsville--his passion for mid-twentieth-century Alabama political history is not surprising. Grady first became interested in Phenix City and the Albert Patterson assassination while researching his master's thesis: "The Campaign for Decency: John Patterson as Alabama Attorney General, 1955-1959."

Though some Alabamians have collected and treasured "Alabama-made" silver, evidence suggests that no silver was made in Alabama during the Antebellum period. Instead, many silver manufacturing firms in the Northeast sent shiploads of silver to retailers in the Deep South. These retailers would then stamp the silver with their own name, causing some modern silver collectors to mistakenly believe the silver was made in Alabama. Edward Pattillo stresses that Antebellum Alabamians knew the silver they bought in the state was brought in from somewhere else. The belief that the silver goods were made in local stores "has been a modern assumption."

Additional InformationThe following articles in the Encyclopedia of Alabama will also be of interest:
About the Author
Edward Pattillo, curator of the Judicial Department of Alabama, Montgomery, is an alumnus of the University of Alabama and Columbia University, New York. He has studied silver with Alabama and Southern histories for twenty-five years. 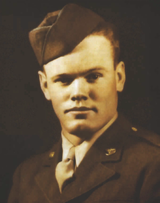 Young Red Erwin from Docena, Alabama, could not wait to get into World War II. His eighteenth air mission, however, would be his last. (Courtesy Mr. and Mrs. Henry E. Erwin)
Red Erwin and the Medal of Honor

On April 12, 1945, Henry "Red" Erwin, a radioman with the U.S. Army Corps, was en route to Koriyama, Japan on a bombing mission when the phosphorous bomb he had dropped through the plane's open chute turned, lifted, and exploded in his face. Three hundred feet above the Pacific, Erwin was instantly engulfed in flames. In an act of selflessness that would save the plane's officers and crew and earn him the Medal of Honor, Erwin grabbed the fifteen-hundred degree bomb, carried it through thick smoke to the cockpit, and hurled it from the plane, collapsing soon afterward. Military brass awarded Erwin the Medal of Honor only two days after he saved his crew. No one expected him to survive much longer. They just didn't know Red Erwin.

Additional Information
For more information on Medal of Honor recipients from the Civil War through Vietnam, see:
About the Author
Judd Katz graduated from Arizona State University and entered the U.S. Air Force in 1967. At the end of his four-year tour of duty at Robins AFB, Georgia, he completed a doctorate in educational psychology at the University of Georgia. In 1973 he began teaching for Auburn University at Montgomery, where he remains today as a professor and administrator.

Continuing in the air force as a reservist, Katz, in 1984, was assigned to the USAF Historical Research Agency, Maxwell AFB, Alabama, as an oral historian. It was during this tour of duty that he researched and documented the contributions of enlisted personnel during World War II, Vietnam, and the Persian Gulf wars and interviewed several enlisted air force Medal of Honor recipients, including Red Erwin. Katz conducted these interviews in March 1986.
Back to Top
Northington General Hospital, Tuscaloosa

During World War Two, Northington General Hospital in Tuscaloosa, Alabama, was one link in an effective military medical network that stretched around the world. With one thousand beds, Northington's specialty was plastic surgery. Because of the destructive nature of war wounds, plastic surgery techniques were in great demand. Doctors at Northington were instrumental in developing new skin-graft techniques during the 1940s.

About the Author
Joanna Jacobs served as an intern at Alabama Heritage during the summer of 1995.
Back to Top

Art in the South
Made in Alabama: A State Legacy

Choctaw Bell, by S. Phillip Romer, may have been commissioned, but it is possible that Romer painted the handsome young woman because she appealed to him as a romantic, exotic subject. Choctaw Belle by Phillip Romer is one of many portraits appearing in Made in Alabama: A State Legacy, published by the Birmingham Museum of Art, 1995, E. Bryding Adams, chief editor and curator. The book was published in conjunction with the landmark exhibition of the same name, which was organized by the Birmingham Museum of Art, opened there October 14, 1994, and is now on tour throughout the state.

The following item in the Encyclopedia of Alabama will also be of interest:

About the Author
E. Bryding Adams is the curator of decorative arts at the Birmingham Museum of Art. The book Made in Alabama and its companion exhibition are the culmination of ten years' research initiated and organized by Adams. Uncovered during the extensive survey of decorative arts were ceramics, furniture, textiles, metals, paintings, and photographs, all made in Alabama during the nineteenth century. Many of the items are from private collections and have never before been presented to the public. The book includes images of all 326 objects in the exhibition, as well as ten essays written by Alabama authorities on the cultural, social, and political history of Alabama during the nineteenth century.
Back to Top
Article Update
What Really Happened to the CSS Hunley? Success and Tragedy in Maffitt's Channel

Alabama Heritage, number 18, contained an article on the development and exploits of one of the Civil War's most intriguing seafaring vessels. The article, "The Confederate Submarine H. L. Hunley," by James E. Kloeppel, concluded with the observation that the Hunley, which disappeared in Charleston Harbor in 1864, had never been found. In May 1995 the wreck of the Hunley was discovered. Alabama Heritage asked Mark Newell, who led the project that resulted in the discovery, to comment on the find.

Additional Information
The following article in the Encyclopedia of Alabama will also be of interest:
Multimedia:
About the Author
Mark M Newell, an archaeologist at the University of South Carolina from 1984 to 1995, is now pursing his research interests from the Georgia Archaeological Institute, Augusta, Georgia.
Back to Top
The Nature Journal
Maypops

About the Author
Larry Davenport is a professor of biology at Samford University, Birmingham.
Back to Top
Southern Architecture and Preservation
A Rare Glimpse of Antebellum Mobile

John Sledge discusses two images, taken from a stereoscopic card, which provide a rare glimpse of antebellum architecture and society in Alabama.  This card is one of few non-studio pictures predating the Civil War in Alabama and represents a welcome relief from the myth-making that surrounds the Old South.

About the Author
John Sledge is an architectural historian with the Mobile Historic Development Commission.
Back to Top
Notes and Queries
Rosenwald Schools: Have You Seen One in Your Area?

Rosenwald schools, built between 1912 and 1932 for African Americans were once a common sight on the rural Alabama landscape. Over the years, they have disappeared from the rural landscape. Jeff Mansell recounts the attempts to document the remaining schools on behalf of the National Register of Historic Places.

About the Author
Jeff Mansell is the Assistant Director of the Cahaba Trace Commission.
Back to Top