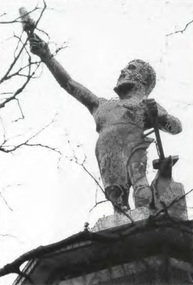 Built for the 1904 St. Louis World's Fair, Vulcan symbolized the importance of iron in early twentieth-century Alabama. But the World's Fair was only the beginning; over the years, Vulcan has been prized and neglected, argued over and praised. This article tells the story of Vulcan's construction, of its fame, and of its slow decline.

For more information about Vulcan and other monumental statues in America, see:

About the Author
George Thompson is literary agent for Atticus Press & Co., an agency and book packager located in Birmingham. Writes Thompson, "My nascent interest in literature, history, and the arts comes admittedly late and counterbalances earlier education in engineering (Auburn University, 1973) and business (Vanderbilt, 1987), as well as a former association with a family-run heavy machinery concern." A native of Nashville, Thompson's first glimpse of Vulcan came in 1957, when he was a child of six and a new resident of Birmingham. Reflecting on those early years, Thompson says, ''When traveling through town at night, we never failed to note Vulcan's strong silhouette, topped by the comforting green torch he held, signifying all was safe on the city's streets."

The editors wish to thank Arthur S. Oakes for assistance in researching the casting of Vulcan.
Back to Top 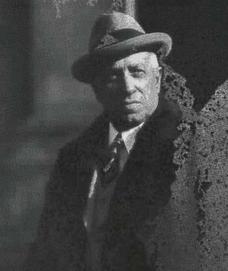 Giuseppe Moretti is best remembered in Alabama for creating Vulcan, but Birmingham's man of iron was only one of the many creations of this artist. He also made sculptures and statues for Vanderbilt University and Highland Park, Pittsburgh. Nevertheless, Moretti remains intimately tied to Alabama; his famous Head of Christ was sculpted out of Alabama marble, as was Siegfried. Though Moretti remains a footnote for many students of art history, his contributions to Alabama make him well worth studying.


The editors wish to thank Jean Pinkerton for her assistance in researching this article.

Buy This Feature
Additional Information
Original information on the life and career of Giuseppe Moretti is available through two sources: The Birmingham Public Library Archives holds a wealth of historical newspaper clippings and articles chronicling the artist's progress; and the Julia Tutwiler Library, Livingston University, has the personal scrapbooks of Miss Geneva Mercer, in which she documented the artistic work of Moretti in the United States. Articles on Moretti include Marvin Whiting's "Giuseppe Moretti" in The Journal of the Birmingham Historical Society (December 1985); see also references under George Thompson's "Vulcan: Birmingham's Man of Iron" in this issue.

About the Author
Jennifer Willard is senior writer for the arts and humanities and coordinator of fine arts promotions for the University of Alabama at Birmingham. For the past four years, she has been entertainment chairman of the "Day in Old Birmingham" festival sponsored by the Birmingham Historical Society. "My involvement in the Historical Society coupled with research on the old Tutwiler Hotel in downtown Birmingham a few years ago sparked an ongoing interest in the history of this area," says Willard. "Piecing together the life of the designer of Birmingham's most famous landmark was much like solving a puzzle-fun, but hard work." Willard co-authored the article "Alabama: The Play," published in Alabama Heritage #18.
Back to Top
A Brief History of the Marble Industry in Sylacauga

Alabama marble, celebrated for its translucence and purity, can be seen on the Lincoln Memorial and has been used by sculptors such as Gutzon Borglum, the man who oversaw Mount Rushmore National Memorial, and Giuseppe Moretti. This article provides an overview of the history of Alabama marble, highlighting its uses--sometimes in the most unlikely of places.

About the Author
Edward Mark Dodd, assistant director of public relations (electronic media) at Louisiana State University, holds a B.A. in theatre from the University of Alabama and a M.Ed. in educational media from Louisiana State University, Baton Rouge. During the late 1970s, while producing a series of promotional films for the Moretti-Harrah Marble Company, Dodd began researching the marble industry in Sylacauga. This article is based on that research and much of the
information comes from his interviews with Geneva Mercer, Giuseppe Moretti's assistant.

The editors wish to thank Gregory M. Guthrie for assistance in preparing this article.
Back to Top