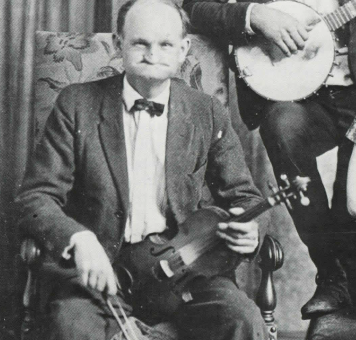 Y.Z. Hamilton (1888-1936), would remove his false teeth and suck in his cheeks, transforming himself into a very old fiddler to get a laugh from the crowd. (Courtesy Olen Mayes)
...And Bring Your Fiddle!
The Fiddler in Alabama Community Life

The history of Alabama is closely tied to the art of fiddling. Early historians of the state observed the preponderance of fiddlers in the territory. The popularity of the form is easy to explain; with paved roads, electricity, and their attendant pleasures unavailable to most rural communities until the late 1940s, entertainment was necessarily a local product. Fiddlers furnished music for logrollings, cornshuckings, peanut shellings, quilting bees, and other work parties. They were ubiquitous. This article examines the history of the fiddle in the life of ordinary Alabamians.

About the Author
When Joyce Cauthen moved to Alabama from her native Texas in 1971, she and her husband Jim began attending folk festivals and fiddlers' conventions around the state. "In 1976," says Cauthen, "my husband decided to learn to play the fiddle. In the years since, he has continued the fiddle, and I've taken up a variety of accompanying
instruments-dulcimer, bass, and guitar."

In order to create an audience for old-time musicians, Cauthen learned to call traditional dances and in 1980 she founded the Birmingham Country Dance Society, which now has more than 200 members. She also participates in
the Artists in the Schools Program of the Alabama State Council on the Arts, teaching and performing old-time music and dance for children.

Cauthen was project director for a record album entitled Possum Up a Gum Stump: Home, Field,and Commercial Recordings of Alabama Fiddlers, sponsored by the Brierfield Ironworks Park Foundation, and she served as director of the first state-wide Alabama Folklife Festival, held in Birmingham, June 1989. Her book, With Fiddle and Well-Rosined Bow: Old-Time Fiddling in Alabama was published in 1989 by The University of Alabama Press, Tuscaloosa, Alabama 35487-2877.
Back to Top 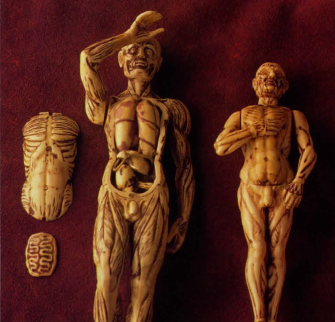 These male manikins of Italian craftsmanship were designed to show to muscles of the body. Originally, the muscles were tinted red. (Photograph by Chip Cooper)
Alabama Collections: Anatomical Manikins and Diagnostic Dolls

Housed within the Reynolds Historical Library at the University of Alabama at Birmingham is a collection of intricately carved ivory figures, each from seven to eight inches in length. Three of the figures are male, two depicted without skin to display the physiology of human musculature. Of the six female figures, all are recumbent, and all have a tiny fetus attached to the manikin's uterus with a red silk umbilical cord. The figures or manikins, displayed in a specially built case, prompt many questions from visitors: Who made them? When were they made? This article seeks to answer these questions, exploring the history and mystery of these curious figures.

The manikin collection in the Reynolds Historical Library was given to the University of Alabama Medical Center in 1958 by Dr. Lawrence Reynolds, a native of Ozark, Alabama, who received degrees from the University of Alabama (1912) and Johns Hopkins Medical School (1916). Reynolds, a pioneer in the field of radiology, was also a bibliophile and an avid collector of medical artifacts. He acquired his manikin collection from another collector, Dr. Amo B. Luckhardt, well known in medical circles for his discovery of the anesthetic properties of ethylene. Luckhardt purchased the majority of his manikins through a dealer in Amsterdam.

Other manikin collections can be found in the Howard Dittrick Museum in Cleveland; the Royal College of Surgeons of England; the Trent Collection at Duke University; the History of Medicine Museum in Copenhagen; the Hungarian National Museum in Budapest; Bologna's Rizzoli Institute; the Germanisches Nationalmuseum of Murnber; and the Bayerisches Nationalmuseum in Munich. The largest collection, fifty-two manikins, is housed in the Wellcome Institute of the History of Medicine in London.
Back to Top
Joseph Glover Baldwin: Antebellum Wit

James Glover Baldwin wanted to be remembered as a social historian and a political theorist; perhaps, as his wife and brother later predicted, he might even become the historian of the Civil War. But none of that was to be. By the time of his death in 1864, forty-nine-year-old Baldwin had succeeded beyond his wildest dreams as a lawyer and a jurist, and in the last ten years of his life had written what he considered the best work of his promising literary career. After his death, however, the writings of those later years were quickly forgotten by the public and ignored by the critics. As a consequence, Baldwin is known to us today primarily as an antebellum wit.

For many writers, such a legacy would have been enough, but James Glover Baldwin would have had it otherwise.

About the Author
Eugene Current-Garcia, Hargis Professor Emeritus of American Literature at Auburn University, first entered the pages of Alabama Heritage in spring 1987, when he published "Mr. Spirit and His Alabama Wits," an article about Southwestern humorists J. J. Hooper and John Gorman Barr. In his second article for Alabama Heritage, Current-Garcia turns his attention to another nineteenth-century Alabama wit, Joseph Glover Baldwin.

"Southern literature is greatly indebted to these humorists," says Current-Garcia. "The foremost writer we have in modem fiction is William Faulkner, who drew a great deal from Southwestern humor." Current-Garcia is also co-editor of American Short Stories, for several decades the preeminent short story collection used in colleges and universities. First published in 1952, American Short Stories (Scott, Foresman & Co.) is now being prepared by Current-Garcia and fellow Auburn professor Bert Hitchcock for a fifth edition.
Back to Top