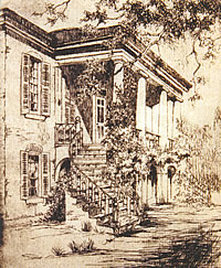 
For Marian Acker Macpherson, the magnificent homes and stately buildings of Mobile were dear old friends—the distinctive remnants of a bygone era. With intricate etchings and vivid prose, she communicated her affection for them and, over the decades, her sadness at their decline. Born in 1906, Macpherson moved in the highest level of Mobile society. Educated in art schools in Mobile and Boston, she studied etching in Provincetown with W.H.W. Bicknell. Returning to her hometown, she published three books of architectural etchings with commentary, the last of which, Glimpses of Old Mobile, she revised at least six times between 1946 and 1983 as historic structures disappeared. Her colorful descriptions of the homes and edifices she found in a state of decay reveal a desire to instill in her fellow Mobilians a sense of possession and pride, as well as an awareness of the vulnerability of these architectural relics.

Buy This Feature
Additional Information
For additional information on the history of Mobile architecture, see Robert Gamble's The Alabama Catalog: Historic American Building Survey: A Guide to the Early Architecture of the State (University of Alabama Press, 1987) and Elizabeth B. Gould's From Fort to Port: An Architectural History of Mobile (University of Alabama Press, 1988).

About the Author
Stephen J. Goldfarb holds a Ph.D. from Case Western Reserve University in the history of science and technology; he retired last year from the Atlanta-Fulton Public Library. Though long out of print, copies of Marian Acker Macpherson's books should be available in libraries or on the used-book market. Secondary literature about the artist is not available. The author would like to thank the following descendants of Mrs. Macpherson for their help and encouragement: Mary Macpherson Currie, Paula Macpherson Watkins and James F. (Jay) Watkins, Thomas B. Van Antwerp, as well as John Sledge.
Back to Top 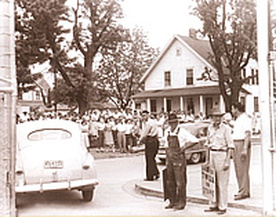 In the decades following the Civil War, Alabama's textile companies designed the mill village to be a "workingman's paradise," a modern-day utopia for blue-collar workers and their families. Opportunity abounded, wages were good, and all the amenities of "welfare capitalism" came with the job—but not without a price. By offering such incentives as free or cheap housing, education, healthcare, and recreational facilities, textile mills across the state were able to recruit, retain, and reward productive, loyal employees. From a management perspective, these self-sufficient, socially cohesive and geographically insular communities were immune from the agitations of northern labor unions. For the mill worker, however, life in the "workingman's paradise" often turned out to be one of constant sacrifice for the good of "the company."

Buy This Feature
Additional Information
For those interested in learning more about the design and philosophy of American company towns and mill villages, the author recommends Margaret Crawford's Building the Workingman's Paradise: The Design of American Company Towns (Verso, 1995). 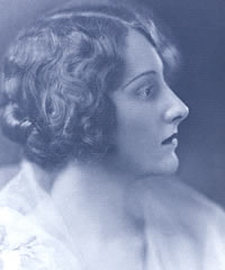 Many aspects of Juliette Morgan's white southern upbringing in Montgomery—her social class, education, and especially her temperament—seemed unlikely to yield a civil rights activist. Yet inspired by Mahatma Gandhi, and troubled by the injustice around her, that is precisely what she became. In the 1930s she began a one-woman campaign to end the segregation and racism that had for so long dominated the southern way of life. She wrote fiery letters to newspapers around the state, joined political groups, and publicly protested the discrimination she witnessed on a daily basis. Her passionate beliefs caused her to become estranged from friends, colleagues, neighbors, and even her own mother. But those who understood her cause encouraged her to brave the losses, which she did up until the end of her short but exemplary life.

The author also recommends JoAnne Gibson Robinson's The Montgomery Bus Boycott and the Women who Started It (University of Tennessee Press, 1987), Martin Luther King, Jr.'s Stride Toward Freedom (Harper, 1958), and Virginia Durr's Outside the Magic Circle (University of Alabama Press, 1990).

About the Author
Mary Stanton currently serves as deputy town administrator for the Town of Mamaroneck in Westchester County, New York. She holds a master's degree in English Literature from Queens College, New York, and another in public administration from the John Jay College of Criminal Justice of the City University of New York. She is also the writer of From Selma to Sorrow: The Life and Death of Viola Liuzzo (University of Georgia Press, 2000) and Freedom Walk: Mississippi or Bust (University Press of Mississippi, 2003). Her other articles have appeared in Government Executive, Southern Exposure, Gulf South Historical Review, and The African-American Experience (Heritage Books).
Back to Top 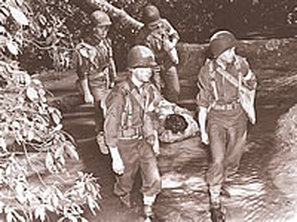 For four years during the Second World War, the Ozark Triangular Division Camp, also known as Camp Rucker, trained scores of soldiers needed to defeat the Axis powers of Germany, Japan, and Italy. While Camp Rucker contributed to our country's success on a global scale, it also represented a personal triumph for former U.S. Congressman Henry B. Steagall, who campaigned for an army post to be located in his Depression-ravaged home district in Ozark, Alabama. With its rolling farmlands, wooded areas, and creek bottoms, Camp Rucker's varied terrain proved to be the ideal testing ground for soldiers training to conduct large artillery maneuvers. The recruits—mostly northerners who had never been to the south—would go on to fight in almost every theater of the Second World War.

About the Author
Jim Noles, a resident of Birmingham, Alabama, is a partner in the Environment & Natural Resources section of the law firm of Balch & Bingham LLP. He is also the author of Camp Rucker During World War II (Arcadia Publishing, 2002); Twenty-Three Minutes to Eternity: The Final Voyage of the Escort Carrier USS Liscome Bay (University of Alabama Press, 2004); and Hearts of Dixie: 50 Alabamians and the State They Called Home (Will Publishing, 2004).
Back to Top 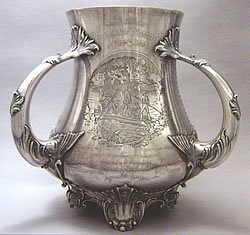 The Hobson loving cup was created to commemorate Raymond Pearson Hobson, who was imprisoned in Cuba in 1898. In October of 1900, the people of Alabama presented the treasure to Lieutenant Hobson at the State Capitol. Over the years, the cup drifted to Virginia, but in January 2004 it returned to Alabama, where it now resides in the permanent collection of the Alabama Historical Commission.

About the Author
Clyde Harris Eller is the chief curator for the Alabama Historical Commission's Historic Sites Division.
Back to Top 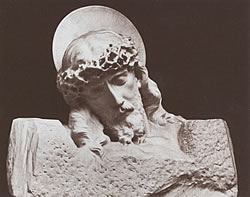 A myth repeated often enough has a tendency to take on the mantle of credibility; one such myth is the story that sculptor Giuseppe Moretti warned that his statue of Vulcan-- "a god dedicated to moneymaking"--should never be separated from his more spiritual marble creation, the Head of Christ. Bob Cason unravels myth from truth in this follow-up to a department entry from AH #71.

About the Author
Bob Cason is the collections curator with the Alabama Department of Archives and History.
Back to Top 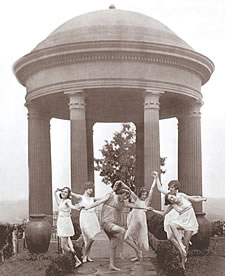 Originally constructed as a burial monument for one of Birmingham's most flamboyant mayors, the historic Sibyl Temple in the City of Vestavia Hills has a past as intriguing as the man who commissioned it more than seventy years ago.

About the Author
Cindy Riley is a former investigative news reporter who now works as a full-time freelance writer in Birmingham.

The "soldier fish" (now more commonly known as the rainbow darter) appears in soldier's tales from both the Confederacy and the Union.  Though strange to the narrators of those stories, the fish is well known to ichthyologists and fans out broadly in the Great Lakes and Mississippi and Tennessee River systems, ruthlessly driving out all competitors in pursuit of total Darter Domination.