Rickwood Field has actually housed two teams since its opening day in 1910. From 1924 until 1962, the Birmingham Black Barons leased the stadium from creator and owner Rick Woodward and played on alternating weekends. It was home of pitcher Satchel Paige, who completed 184 strikeouts in 1929. Another rookie named Willie Mays also began his legendary career as a Black Baron. With the onset of the civil rights movement, the Barons decided "to fold rather than to integrate." In 1964, an integrated Barons team returned and played at Rickwood until 1987. At that time a new owner, Art Clarkson, moved the Barons to the team’s current home, the Hoover Met. In 1991, after the demolition of Chicago’s Comiskey Park, Rickwood became the oldest standing baseball stadium in the United States. In 1992, a nonprofit organization called "Friends of Rickwood" was organized to aid in the preservation and restoration of this historical site.
Buy This Feature
Additional Information
The following articles in the Encyclopedia of Alabama will also be of interest:
Multimedia:

About the Author
Paige Wainwright is assistant director at Sloss Furnaces National Historic Landmark. A native of Birmingham, Wainwright has a master's degree in American history from the University of Alabama at Birmingham. Her interest in baseball goes back to the great New York Yankee teams of the 1950s and to her own years as an avid softball player.
Back to Top 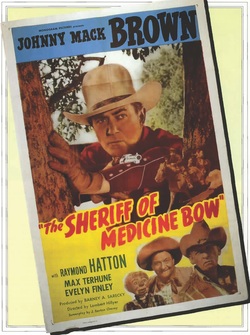 The Story of Johnny Mack Brown

In 1926, the University of Alabama’s All-American halfback Johnny Mack Brown led the Tide to a 20-19 victory over the University of Washington in the Rose Bowl. However, by 1927 he had opted to trade his stardom on the football field for stardom on the movie screen. Eventually, Brown, known as the "Dothan antelope," became one of the most popular Western entertainers of his era: the "heyday of the Hollywood cowboy." He eventually appeared in more than 168 films. "In contrast to an array of jolly, happy-go-lucky singing cowpokes," writes UA English professor Philip Beidler, "Mack Brown’s character image was always one of a rough, tough, no-nonsense hero, eager to bring about justice with a quick fist or trigger finger."
Buy This Feature
Additional Information
The following articles in the Encyclopedia of Alabama will also be of interest:Multimedia:

About the Author
Phil Beidler, professor of English at the University of Alabama, grew up with Saturday afternoon cowboy movies and reports having no difficulty relating to All-American good-guy heroes like Johnny Mack Brown. The chance to research Brown's life, says Beidler, was "especially welcome" because it led him into the arena of twentieth-century American culture where Beidler feels at home, having written book-length studies of Vietnam, the sixties, and, most recently, World War II classic films.

The author wishes to express his thanks for the help offered by members of the Brown family and by the staff of the Paul W Bryant Museum in the preparation of this article.
Back to Top

Lock No. 2, Coosa River, c. 1900. While watching water flow through this flume, William Patrick Lay is said to have envisioned the beginnings of what later became the Alabama Power Company. (Courtesy Scarboro Photography, Gadsden, Alabama)
Taming the Coosa

One of the wildest rivers in the Southeast, the Coosa defied nineteenth-century efforts to tame her. Before hydroelectric dams turned it into a series of elongated lakes, the Coosa was really two rivers, one deep and navigable, another nearly one hundred miles of dangerous rocks and reefs. From the late 1860s until the early part of the 1900s, state and federally funded projects studied and improved the navigability of the Coosa River, creating a waterway for the expanding commerce of Alabama and Georgia. Harvey H. Jackson III, professor and head of the History Department at Jacksonville State University, details the Coosa’s history that parallels Alabama’s commercial development after the Civil War. This article is an outgrowth of Jackson’s research for Rivers of History: Life on the Coosa, Tallapoosa, Cahaba, and Alabama, recently published by the University of Alabama Press.

Additional InformationThe following articles in the Encyclopedia of Alabama will also be of interest:Multimedia:
About the Author
Harvey Jackson, professor and head of the Department of History at Jacksonville State University, is a frequent contributor to Alabama Heritage. His articles "The Mitcham War," the story of a violent political struggle in 1890s Clarke County, appeared in Alabama Heritage issue 25, and "Philip Henry Gosse: An Englishman in the Alabama Black Belt" appeared in issue 28.

Jackson is currently working on a book tentatively titled "Putting 'Loafing Streams' to Work: The Building of Lay, Mitchell, Martin, and Jordan Dams (1910 to 1929)," which he is writing for the Alabama Power Company.
Back to Top
Alabama’s Most Endangered Historic Places, 1995

About the EHPC
Selection of this year's most endangered historic properties was made by a committee composed of preservationists from the Alabama Historical Commission (a state agency) and the Alabama Preservation Alliance (a private, nonprofit preservation organization). Committee members representing the Commission include Robert Gamble, senior architectural historian, and Ed Hooker, preservation architect, with assistance from other members of the Commission staff. Committee members representing the Alliance include Suzanne Wolfe, editor of Alabama Heritage; Devereaux Bemis, architectural historian, Mobile Historic Development Commission; Mary Johnson Huff, editor, Black Belt Press; and Jeff Mansell, executive director, Tuscaloosa County Preservation Society. Almost every conceivable aspect of our built environment is eligible for inclusion on the endangered properties list (see page 42). The threshold qualification, however, is that each site be considered potentially eligible for listing on the National Register of Historic Places--if the site is not already listed. The committee made its selections after reviewing the extensive listings on the Preservation Watch List maintained by the Alabama Historical Commission and nominations made by the general public.
To read about more places in peril, click here for our Places in Peril blog.
Back to Top

Extinction is forever--this truth is undeniable. However, the case of Tulotoma magnifica, the Alabama live-bearing snail, calls this truth into question. Once declared extinct, then rediscovered in huge numbers, the tulotoma--Alabama's only federally listed endangered snail--clings tightly to life.

About the Author
Larry Davenport is a professor of biology at Samford University, Birmingham.
Back to Top
From the Archives
An Alabama Legacy: Images of a State

Photographs are part of a shared legacy passed down from one generation to another. By capturing moments that words alone cannot evoke, photographs offer a direct link to the past. In 1995, the Friends of the Alabama Archives and the Alabama Department of Archives and History published a pictorial history entitled An Alabama Legacy: Images of a State. Alice Knierim discusses the photographs found in this collection.

About the Author
Alice Knierim is Assistant Director for Field Services, Alabama Department of Archives and History.
Back to Top