By Lawrence A. Clayton

The idea of constructing a canal through Nicaragua became John Tyler Morgan’s lifelong dream. He devoted his sixty-nine years in the United States Senate and almost photographic memory to seeing the fruition of the canal, and the dream of a “two ocean” navy. The idea of a Nicaraguan canal rode a rollercoaster of great victory and irreversible defeat throughout the latter part of the nineteenth century. During one Senate session, though the canal had been set to be built in Panama, Morgan was estimated to have spoken over 200,000 words on the issue of his Nicaraguan obsession.

Additional InformationThe following article in the Encyclopedia of Alabama will also be of interest:
About the Author
Larry Clayton, a professor of history at the University of Alabama, specializes in Latin America. Clayton, who became interested in the Nicaragua canal while on a Fulbright appointment to Costa Rica in 1983, has written on subjects spanning the sixteenth to the twentieth centuries. His last book, Grace, W. R. Grace & Co., The Formative Years, 1850-1930, told the story of the rise of the first American multinational in Latin America. In 1992 Clayton edited The De Soto Chronicles, a two-volume tome on the sixteenth-century Spanish conquistador published by the University of Alabama Press.
Back to Top 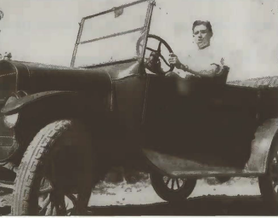 The roads were impassable, the cars were undependable, and spare parts were unavailable. None of it mattered; southerners were ready to take to the road. The car offered people in the South a source of adventure and mobility, and acted as a catalyst to improve state roads. The editors of Alabama Heritage depict the South’s love affair with the car, from the early 1900s to the late 1950s, with snapshots of Alabamians from Birmingham to Prague.

Additional Information
About the Authors
Several years ago we asked our readers to send us photographs of their ancestors in bathing suits. To our delight, terrific photographs came in the mail: pictures of turn-of-the-century Mobilians in long-sleeve, wool bathing gowns and snappy sunbonnets; flappers at the beach in black cotton stockings and high heel shoes; women swimming in high-top tennis shoes; "Kissin' Jim" Folsom laying one on an Alabama bathing beauty. Readers enjoyed it, and so did we. At the suggestion of Virginia Van der Veer Hamilton of Birmingham, who has something of a passion for old photographs, we're at it again. This time with old cars. From around the state, readers have sent us their favorite photographs of relatives and friends with their horseless carriages.

Our only regret is that space constraints prevented us from publishing them all. A number of Alabama Heritage interns helped with this article, principally Nelle Bashinsky, who did much of the initial research and writing. For car identification we relied on the considerable skills of Vassar Hemphill and Bill Wright of Tuscaloosa.
Back to Top

This map of Clarke County was published in 1891. The shaded area is Mitcham Beat.
The Mitcham War

Political and class wars came to a head in post-Reconstruction Clark County, with a series of brutal murders known as the Mitcham War. In the area of Mitcham Beat, tenant farming and the crop lien system put many poor farmers in a precarious financial position. Many farmers felt the Democratic government of Clark County did not care about the problems of the working man and were more interested in securing the upper-class’s hold over Alabama politics. When one small-time farmer lost his land to an upper-middle-class store owner, the anger of the community erupted into literal class warfare, the outcome of which left Mitcham Beat an isolated and introverted community.

About the Author
Harvey Jackson grew up in Clarke County, between Grove Hill and Zimco, on land once part of his great-grandfather William W. Waite's "place." He was educated at Marion Institute, Birmingham-Southern, the University of Alabama, and the University of Georgia. After teaching for over twenty years in Florida and Georgia, Jackson returned to Alabama in 1990 as head of the history department at Jacksonville State University. He is currently working on a history of the Alabama River system, while he and his wife are making plans to restore Sheriff Waite's home near Grove Hill.
Back to Top

The rain porch--a full, extra porch that extends three to six feet beyond the main porch--is a distinctinve architectural feature of Point Clear, an area that receives over sixty inches of rainfall annually. Waring Inge Holt discusses the history, design, and uses of this structural innovation.

About the Author
Waring Inge Holt has worked in historic preservation for fifteen years. She has owned and restored two early nineteenth-
century houses in Carlisle, Pennsylvania, and a c. 1792 house in Alexandria, Virginia. The founder of Historic Carlisle Partners (which buys and restores old houses), she resides part of the year in Point Clear, Alabama.
Back to Top