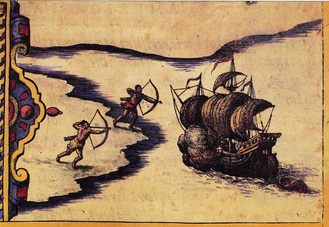 Detail from a map of the New World by Jode, 1593.
(Courtesy W.S. Hoole Special Collections Library,
University of Alabama)
The Spanish Heritage of the Southeast


By Lawrence A. Clayton

At first glance, the idea of a Spanish heritage in the Southeast seems strange. Southerners speak English, not Spanish., Most trace their religious roots to Protestant England rather than to Catholic Spain. But, as Lawrence Clayton points out, the story of the South could have been very different. Spaniards were the first Europeans to explore this part of the world. Had they been adventurers and colonists of a different type with goals other than those they had, the American South might have a different heritage today. Some of the reasons it does not can be found in the story of the Spanish conquistadors in Alabama and the Southeast--in what they sought, what they found, and what they left behind.

Additional Information
About the Author
Larry Clayton, a New Jersey native, spent much of his youth in Peru, where his father was employed by W. R. Grace & Co., the first multinational corporation in Latin America. After graduating from Duke University in 1964, Clayton completed a master's degree and doctorate in Latin American history at Tulane University. He joined the University of Alabama history faculty in 1972 and has directed the university's Latin American Studies Program since 1980.

Clayton has published widely on Latin American history and is currently writing a textbook on the subject for Harcourt, Brace, Jovanovich. His most recent book is Grace: W. R. Grace & Co., the Formative Years, 1850-1930, published by Jameson Books in 1986.
Back to Top 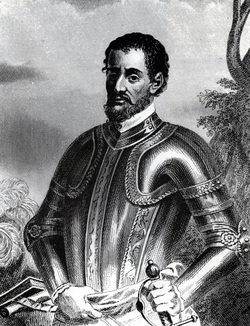 Hernando De Soto's entrada, perhaps more than other Spanish expeditions into the southern United States, has captured the imagination of scholars and the public alike for a number of reasons, primarily because the possibility of correlating De Soto's accounts with the landscape of the South would provide a wealth of historical detail. This article chronicles the search for Hernando De Soto's campsites.

About the Author
John Hall, program coordinator for the Alabama State Museum of Natural History, emphatically disavows being an expert on anything. He studied geology and biology as an undergraduate, taught high school science for several years, and recently completed his doctorate in education at  the University of Alabama. Since 1978 Hall has been program coordinator for the State Museum of Natural History, where he supervises educational programs, manages the natural history collections, and leads the museum's summer expeditions.

Hall first became interested in the search for De Soto in 1979 when the museum supported archaeologist Caleb Curren's De Soto project in Tuscaloosa and Hale counties. He has been hooked ever since.

The author wishes to thank Vernon James Knight and Caleb Curren for their assistance with this article.
Back to Top 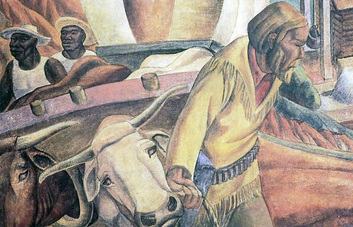 Detail of "Shipment of First Iron Produced in Russellville,"
a fresco by Conrad Albrizio, completed in 1938. (Photo courtesy
Chip Cooper)
The Battle of the Beehive Furnace Mural: Russellville, Alabama

On the north wall of the Russellville post office is a mural: laborers working around a massive beehive iron furnace. The painting seems like an unlikely target for controversy, but in the 1930s it was the center of a conflict that eventually involved the Speaker of the US.House of Representatives. The debate was, ultimately, about more than the mural's subject matter; at its heart is the question of ownership. To whom does federally supported public art belong?
Buy This Feature
Additional Information
For case files on Alabama's post office murals, see:

About the Author
Bob Mitchell (1937-1986) was a member of the University of Alabama history faculty from 1967 until his untimely death last August. Mitchell, an Atlanta native, received his B.S. degree from Georgia Southern College, and his M.A. and Ph.D. degrees from Tulane University. A specialist in Southern colonial history, he published numerous articles on the American Revolution in the South. Recently he had become interested in the federal art patronage programs of the 1930s and had spent time in the National Archives researching the Alabama post office murals commissioned by the Section of Painting and Sculpture. In preparing for this article, Mitchell also interviewed Mr. and Mrs. Charles Underwood, longtime residents of Russellville, and he wished to thank them publicly for their assistance.

The editors would like to thank Russellville Postmaster Jimmy Ross Seay for his help in obtaining photographs for this article.
Back to Top 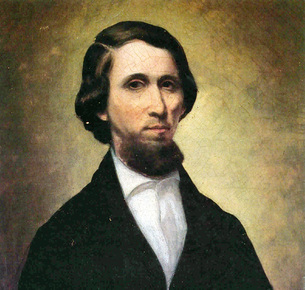 
William Trotter Porter--also known as "Mr. Spirit" or "The Tall Son of York"--used his New York sporting journal Spirit of the Times to bring attention to a new type of American literature: Southwestern frontier humor. Porter ennobled a new class of writers. With his help, the authors he published were able to  bring new zest and vigor to American fiction. This article recounts the story of Porter and his top authors. It includes two excerpts by J.J. Hooper and John Gorman Barr, both published by Porter.

About the Author
Eugene Current-Garcia, Hargis Professor Emeritus of American Literature at Auburn University, joined the Auburn faculty in 1947 after completing undergraduate and master's degrees at Tulane University and a Ph.D. in American literature at Harvard University. Professor Current-Garcia has written and edited numerous books and articles on American short fiction, including O. Henry (1965), and his latest book, The American Short Story before 1850: A Critical History (1985), both by Twayne Publishers.
Back to Top