Albert Koch was one of the more ingenious showmen of the nineteenth century. He was also a keen observer of geologic phenomena and a competent natural historian, although he was not professionally trained. His museum drew large crowds only when strange and spectacular creatures were displayed, keeping the peripatetic Koch busy searching for new specimens. Among his specimens was a 114-long "sea serpent"--a crazy-quilt monster assembled by Koch himself from the bones of multiple fossil whales. Fraud, showman, scientist--this is the story of Albert Koch and his fabulous creatures.

About the Author
Doug Jones, dean of the College of Arts and Sciences at the University of Alabama from 1969 to 1984, is currently academic vice president of the University and director of Alabama Museums, including the Alabama State Museum of Natural History, the Paul W. Bryant Museum, and Mound State Monument in Moundville. Jones, a professor of geology, is also coauthor, along with John T. Thurmond, of Fossil Vertebrates of Alabama (The University of Alabama Press, 1981), a valuable reference for workers in vertebrate paleontology and for fossil collectors and others interested in prehistory, especially that of Alabama and the Southeast.

In 1961, in a remote area in north Washington County, Jones and several graduate students uncovered the most complete skeleton of a single zeuglodon found in Alabama since the late 1800s. That skeleton is now part of the collection of the Alabama State Museum of Natural History.

Special thanks to Raymond T. Rye II, National Museum of Natural History, Smithsonian Institution, for help in acquiring
photographs for this article.
Back to Top 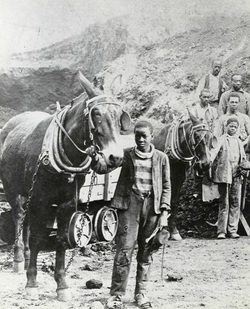 For sixty-two years--from 1846 to 1928--and longer than any other state in the Union, Alabama leased its prisoners either to individuals or, more generally, to large coal mining companies. The practice began as a practical measure designed to help the state pay for its prison system by forcing prisoners to earn their own living. In time, however, it became clear that the convict lease system was badly broken. After the Civil War, convicts were put to work rebuilding railroads. These prisoners died in awful numbers as contractors worked and starved them to death. Even at the best of times, the system provided a life of utter filth, degradation, and vicious punishment. This is the story of that system.
Buy This Feature
Additional Information

About the Authors
David Ward and Bill Rogers, both native Alabamians, hold bachelor's and master's degrees in history from Auburn University, and both received doctorates in history from the University of North Carolina at Chapel Hill. Ward, professor emeritus of history at Georgia Southern College, and Rogers, professor of history at Florida State University, have collaborated on three books: Labor Revolt in Alabama: The Great Strike of 1894 (University of Alabama Press, 1965); August Reckoning: Jack Turner and Racism in Post-Civil War Alabama (Louisiana State University
Press, 1973); and Convicts, Coal, and the Banner Mine Tragedy (University of Alabama Press, 1987). Currently, professors Ward and Rogers are collaborating on a monograph on Alabama's penitentiary system.
Back to Top
Rammed-Earth Houses in Mount Olive

To help pull America out of the quagmire of the Great Depression, the federal government paid artists to paint post office walls. It paid photographers to take pictures of poor farmers. It paid men to plant trees, to build parks. And in one state--Alabama--the federal government even paid workers to construct houses out of dirt. Those dirt houses still stand today in Mount Olive, Alabama--monuments to a time when widespread poverty in America prompted many of the nation's leaders to dream of creating a new society.

About the Author
Birmingham resident and freelance writer Leigh Anne Roach holds a bachelor's degree in art history from Emory University and a master's degree in library science from Florida State University. Interested in the relationship between people and buildings, particularly between people and the places they choose to dwell, Roach first learned of Mount Olive's rammed-earth houses when she was researching an old Birmingham brick plant mentioned in Marjorie Longenecker White's book The Birmingham District: An Industrial History and Guide.

Of the Mount Olive development, she says, "I found the combination of people, their hopes for a better life, and the architecture that sprang from those hopes to be an irresistible combination which I felt drawn to investigate."
Back to Top