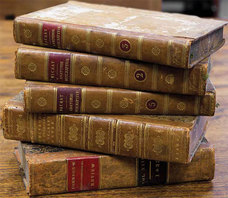 Prior to Alabama’s statehood, the territory offered a rough and tumble—but potentially lucrative—site for settlers willing to risk to hardships of an emerging community. One such settler was Doctor Thomas Fearn, who quickly established himself as a reputable and conscientious physician. Fearn studied in Europe, where he gained a strong sense of the physician’s ethical codes, before establishing his practice in Huntsville and nearby communities. Although devoted to medicine, he also diversified, leaving his influence on the landscape as well as its people.

About the Author
Thomas Reidy is a doctoral candidate at the University of Alabama. He is currently writing a dissertation on antebellum professionals in Alabama from 1800 to 1860. Reidy is a part-time instructor at the University of Alabama in Huntsville where he has taught courses in world history, Western civilization, and American history, since 2007. In addition, Mr. Reidy works with the University’s New College, supporting the efforts of the Scottsboro Boys Museum and Cultural Center. The author is a past recipient of the Frank Lawrence Owsley Award for outstanding competency in history and winner of the Friends of the Alabama Department of Archives and History Fellowship in 2010. Reidy would like to thank Olin King for making his private collection of Fearn documents available for use in this article. 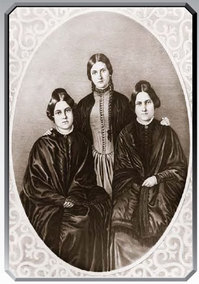 The Fox sisters
helped unleash the Spiritualist craze
(Library of Congress)
Seeking Solace from the Dead: The Spiritualists of Mobile

As the Spiritualist movement swept across America, some Alabamians also fell under its spell. Marked by charismatic—and more often than not, disingenuous—figures such as the Fox sisters, the movement offered a chance at direction and certainty in the midst of chaotic nineteenth-century life. Although significantly less prominent at the end of the century, for a time, spiritualism reigned as a pursuit among many Mobile citizens, each of them eager to commune with the realm beyond their own.

Buy This Feature
About the Author
Nancy Gray Schoonmaker earned her PhD in history from the University of North Carolina at Chapel Hill in 2010, completing a lengthy study of "Spiritualists in the Nineteenth-century South." She keeps body and soul together with her day job, serving as a program and communications coordinator in UNC’s department of history. On her own time she continues to work as an independent scholar and is currently revising her dissertation for publication. Her interest in Spiritualism developed while working on a master’s thesis about Civil War diarist Sarah Morgan, whose frequent mentions of the subject called into question the assertions of previous scholars that Spiritualism had been unpopular in the South. Schoonmaker’s idea of a dream vacation is two weeks in the archives.
Back to Top 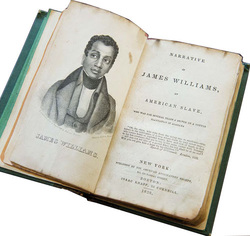 This portrait of James Williams
lent credence to the "Narrative."
(Alabama Department of Archives and History)
The Memoir that Wasn’t: An Alabama Slave, a New England Poet, and the Scandal that Changed the Abolitionist Movement

The memoir of escaped slave James Williams created quite a sensation upon its publication in 1838. Loaded with emotional and melodramatic scenes, the memoir offered a haunting and pointed indictment of American slavery, and it urged readers to end this institution. However, when some astute Alabama readers noticed a few errant details, another sensation arose around the book: it wasn’t actually true. Colin Rafferty traces the book’s history and publication, along with the involvement of John Greenleaf Whittier, whose hand embellished a great deal of Williams’s story.

About the Author
Colin Rafferty received his Master of Fine Arts from the University of Alabama and now teaches nonfiction writing at the University of Mary Washington in Fredericksburg, Virginia, where he lives with his wife and dog. His article on Hank Williams appeared in the Fall 2007 issue of Alabama Heritage. His essays have twice been named "Notable American Essays" in the annual Best American Essays series, and recent work of his has appeared in South Loop Review and Witness. He is at work on several projects, including a cultural history of faked memoirs, of which "The Memoir That Wasn’t" is a part. 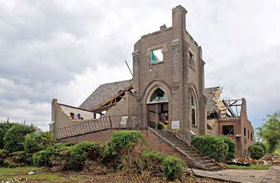 The devastating storms that passed through Alabama in April 2011 wreaked destruction to life, limb, and buildings. Approximately a year after the tornadoes, historian Robert Gamble offers a survey of the architectural losses caused by the storms. Many historic structures sustained damage, and Gamble’s update appraises the state of these damages and the possibility for some restoration. It also chronicles other significant tornadoes in Alabama’s history, noting how the state’s citizens have united to restore historic structures. 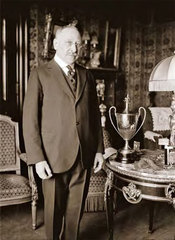 Built as part of a joint endeavor between Booker T. Washington and philanthropist Julius Rosenwald, head of the Sears and Roebuck company, Rosenwald schools are increasingly recognized as a vivid reminder of the early African American struggle for educational opportunity on the southern landscape. In connection with a National Trust–sponsored conference on Rosenwald schools to be held at Tuskegee University in June 2012, Dorothy Walker here discusses the meaning of the Rosenwald school movement and some recent preservation efforts in Alabama.

About the Author
Dorothy Walker coordinates the documentation of Rosenwald Schools for the Alabama Historical Commission and serves as Alabama’s representative on the National Trust for Historic Preservation Rosenwald School Initiative and Task Force. Robert Gamble, standing editor of the "Southern Architecture and Preservation’ department ofAlabama Heritage, is senior architectural historian for the Alabama Historical Commission. 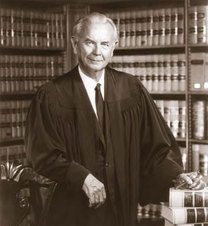 The latest installment of Becoming Alabama charts significant events in each of the three time periods. Joseph W. Pearson revisits the circumstances that led to the War of 1812, detailing how the particular tensions of the frontier made settlers ready—and in some cases even eager—for conflict. Next, Megan L. Bever looks at the Civil War occupation of northern Alabama communities and the toll of life under Union invaders. Finally, Matthew L. Downs considers some legal decisions arising during the civil rights movement, detailing how landmark cases such as Baker v. Carr originated in Alabama. Each installment shows the increasing ramifications of events in the state on these larger historical events. 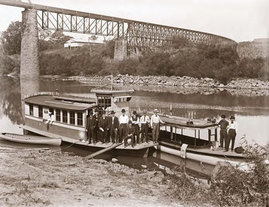 Dr. Eugene Allen Smith
leads a group of geologists on a river expedition.
(W.S. Hoole Special Collections Library,
The University of Alabama)
Portraits & Landscapes:
The Dreamers and the Realist

In post–Civil War Alabama, Eugene Allen Smith, the state geologist, strove to identify the natural resources available as a means to help push Alabama forward in its reconstruction. Along the way, he encountered many citizens striving to do something similar—find fortune from the land. Although Smith’s expertise allowed for a valuable perspective, locals often ignored it, convinced that they had found silver, gold, or other riches in the state’s natural bounty.

About the Author
Aileen Kilgore Henderson is a Tuscaloosa native and award-winning author of children’s books. She has also written two memoirs, numerous short stories and articles, and the recently published Eugene Allen Smith’s Alabama: How a Geologist Shaped the State (New South Books, 2011).

Larry Davenport normally reports on all sorts of Alabama wildlife, charting the state’s diverse flora and fauna. In this quarter’s column, however, he takes a different approach, exploring how some figures tried to tame what they considered the "wild" tendencies of humans. In a fascinating history of Graham Bread, Davenport connects cultural and culinary history, offering a colorful commentary on a food many of us have probably never given a second thought. After reading his article, we promise you’ll never look at Graham Bread (or its relative the Graham cracker) the same way again.

Additional Information
If you require further reading on the subjects of Sylvester Graham, the Kellogg brothers and/or C. W. Post, the author suggests the following:

About the Author
Larry Davenport is a professor of biology at Samford University. This column, running since 1993, inspired his recent book Nature Journal (University of Alabama Press, 2010).
Back to Top 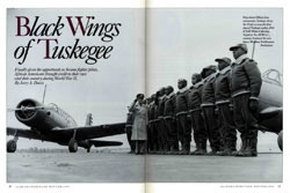 By Jerry A. Davis Jr.

In the Winter 1993 (#27) issue of Alabama Heritage, the magazine introduced readers to the little known history of the Tuskegee Airmen in Jerry Davis’s "Black Wings of Tuskegee." Davis opened readers’ eyes to the fascinating story of the African American pilots who performed so bravely and admirably in World War II but faded from history for decades. Now, nearly twenty years after the story appeared here, Hollywood has released the blockbuster movie Red Tails, depicting the war experience of the Tuskegee Airmen for a wide audience. To celebrate this achievement, Alabama Heritage posed several questions to Davis regarding his research and writing experience from the early 1990s. He reveals what it was like to stumble upon and share such an important story.

About the Author
Jerry A. Davis Jr., PhD, has written scholarly articles and reviews for American Presbyterians, Alabama Review, Journal of the West, New Mexico Historical Review, and the Western Historical Quarterly. Davis’s Chamberlain’s Navy: A Story of the American Civil War Off Shore (CreateSpace, 2011) is his first work of historical fiction. Davis’s tenure in education includes service at several prep and colleges, including Spelman College, the University New Mexico, Oakwood Friends School, and The Oakridge School of Texas, where he is director of admissions.


Back to Top
Reading the Southern Past:
The Alabama River and Its Tributaries