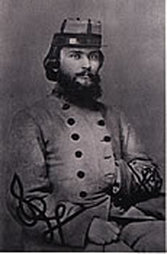 At the dawn of the Civil War, future Alabama governor William C. Oates organized a company of 121 men on the steps of the Abbeville court house. Though most of the men had no battlefield experience, they nevertheless enthusiastically marched northwards carrying dreams of glory and a strong devotion to the Confederacy. On their journey, these young men—known as Company G of the 15th Alabama—were introduced to the stark realities of a soldier’s life, facing death and hardship as they traveled closer to the war and were thrust into some of its most notorious battles. They would be immortalized at Gettysburg’s Little Round Top.

About the Author
Glenn W. LaFantasie, who received his PhD in History from Brown University, is the Richard Frockt Family Professor of Civil War History and Director of the Center for the Study of the Civil War in the West at Western Kentucky University. He is the author of Gettysburg Requiem: The Life and Lost Causes of Confederate Colonel William C. Oates (Oxford University Press, 2006), Twilight at Little Round Top (Wiley, 2005), and other works on the Civil War. Professor LaFantasie, who served as Deputy Historian of the U.S. Department of State in Washington from 1991 to 1995, has formerly taught at the University of Rhode Island, Gettysburg College, and the University of Maine at Farmington. His articles regularly appear in Civil War Times, North & South, American History, America’s Civil War, and MHQ: The Quarterly Journal of Military History. He lives with his wife, Donna, in Bowling Green, Kentucky. They have three grown children.
Back to Top 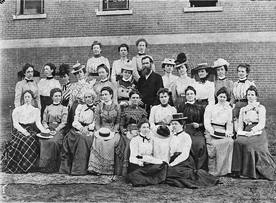 The first faculty of the
Alabama Girls' Industrial School
(University of Montevallo)
Montevallo: Mound in a Valley

From the earliest Creek inhabitants and Jacksonian pioneers who revered Montevallo for its beauty and fertility, a unique appreciation and spirit has long surrounded the city. As Montevallo developed over time into a lively town of commerce and community, residents began to nurture their love for the area into a vision of education, industry, faith, and recreation. An exploration of the city’s past reveals how present-day Montevallo has stayed true to the preservation of its many riches.

About the Author
Alissa Nutting is an Assistant Editor at Alabama Heritage. She lives in Tuscaloosa where she is an MFA candidate at the University of Alabama and editor of the Black Warrior Review. Her fiction has appeared in various literary journals includingSwink, The Southeast Review, Ecotone, and Versal, and is forthcoming in a short-story anthology from Tin House Books. The author wishes to thank Marshall Goggins, Bobby Joe Seales, and the inspiration of Eloise Merony’s book Montevallo: The First One Hundred Years for being invaluable resources. 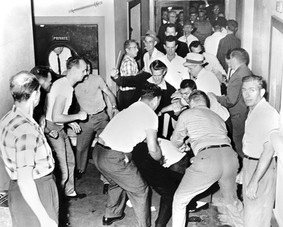 George Webb is beaten by a mob of Klansmen
(Birmingham Post-Herald and
Bettmann/CORBIS)
Shot Seen ‘Round the World: The Tommy Langston Photo

On May 14, 1961, Birmingham Post-Herald photographer Tommy Langston waited for the Freedom Riders to arrive in the Birmingham Trailways bus station. The Freedom Riders had already been attacked on their journey south, and Langston was prepared for a scene. What he did not know, however, was that the violence he would document that day would go on to endanger his life and alter the course of a revolution.

About the Author
The son of a country doctor in Thomaston, Alabama, Clarke Stallworth attended Marion Institute, Emory University, and received his BA in journalism from the University of North Carolina. He was city editor of the Birmingham Post-Herald and managing editor and columnist at the Birmingham News. For the past twenty years, he has been a newspaper consultant, visiting more than one hundred daily newspapers and giving more than five hundred workshops for press associations. He has made thirty-three presentations at the Alabama Press Institute in Reston, Virginia. He has taught journalism at the University of Alabama in Tuscaloosa, the University of Alabama at Birmingham, Samford University, and Jacksonville State University. He is the author of three books on Alabama history. He is married to Anne Nall Stallworth, author of three published novels. They have two children and three grandchildren. 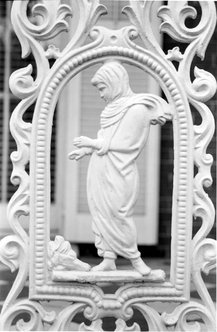 Early Mobile's bare, simple streets matched its lack of prosperity. But after Alabama's statehood, the city's ports began to thrive and the face of Mobile changed accordingly. As the city became richer and more populated, business owners imported large amounts of iron from northern foundries to make impressive decorations for their establishments. Through much of the nineteenth century, the trade of ornamental ironwork grew quickly in Mobile, infusing the city's austere beginnings with the unique, lush verandas and building-sides it is still renowned for today.

About the Author
John Sledge was born in Gainesville, Florida, in 1957 and moved with his family to central Alabama in 1962. He grew up in Montevallo but has deep roots on the Gulf Coast. His mother lived in the Pontalba Building in New Orleans as a child, and his father grew up in Georgia Cottage on Springhill Avenue, home of Victorian authoress Augusta Evans Wilson. Sledge holds a BA in history and Spanish from Auburn University and a master’s degree in historic preservation from Middle Tennessee State University. He is an architectural historian with the Mobile Historic Development Commission, where he has worked since 1985. He is the author of two books, Cities of Silence: A Guide to Mobile’s Historic Cemeteries (University of Alabama Press, 2002) and An Ornament to the City: Old Mobile Ironwork (University of Georgia Press, 2006). In addition, Sledge is Books editor for the Mobile Press-Register. He lives in Fairhope with his wife and daughter. This article is adapted from John Sledge’s new book, An Ornament to the City: Old Mobile Ironwork, published by the University of Georgia Press. Publication of this book was made possible in part by a grant from the A. S. Mitchell Foundation.

Sheila Hagler, who resides in Grand Bay, Alabama, is a fine art photographer specializing in black and white. For nine years, she has taught students (middle and high school) in south Mobile County as an artist in residence for the Alabama State Council on the Arts. Her program, Merging of Cultures, produced the post-Katrina exhibition, "Eyes of the Storm." Hagler is also one of three women featured in a PBS documentary airing nationwide this year, "Living Courageously: The Spirit of Women." Hagler was nominated because of her work with at-risk, post-Katrina children in Bayou La Batre. 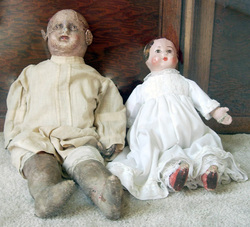 The eccentric Ella Smith of Roanoke, an art instructor and amateur inventor, was one of few women who held patents in the early twentieth century. After her retirement Smith pursued a goal to produce an indestructible doll for children. Because of Smith’s artistic skill and business sense, her creations have since proved to have a value as durable as the dolls themselves.

About the Author
Susan Warley Hales is an artist and writer living in Mobile, Alabama, where she recently received her BFA in Studio Art with a thesis show in which dolls were used to represent her family stories. In researching and purchasing the dolls for the paintings she became aware of the Alabama Indestructible Doll of Roanoke. Susan will complete her MA in Creative Writing in June 2007 from the University of South Alabama where she currently works at the University Library. 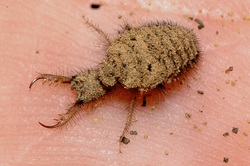 Many people worldwide share the common childhood memory of lying by the hole of a doodlebug and urging it to come out with a rhyming plea. Larry Davenport describes the life process of the doodlebug and also accounts for the cultural significance of the ever-present insect, discussing its many appearances in literature as well as the variations of doodlebug rhymes across the globe.

Jason Sokol and Gary May have each published books on the white response to the civil rights movement, There Goes My Everything: White Southerners in the Age of Civil Rights, 1945–1975 and The Informant: The FBI, the Ku Klux Klan, and the Murder of Viola Liuzzo, respectively. Stephen Goldfarb summarizes both works and discusses the differing focus in each one.