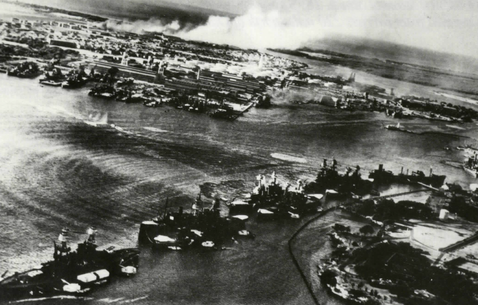 Aerial view of Pearl Harbor, taken from a Japanese bomber shortly after the first onslaught, shows the position of U.S. ships on Battleship Row. In the background smoke rises from fires at Hickam Field. (Courtesy National Archives)
Alabamians at Pearl Harbor

December 7, 1991, marked the fiftieth anniversary of the day "that will live in infamy." Alabamians who survived Pearl Harbor remember the attack and its devastating aftermath. The shocking attack marked the beginning of America's military participation in World War II. The first wave of Japanese planes arrived while most of the island was still asleep: 189 fighters and bombers swooped in to wreak destruction on the unsuspecting American fleet. It was one of the most humiliating attacks in United States history. This article recounts the attack and includes a number of sidebars featuring these survivors telling their stories in their own words.

About the Author
Maridith Walker Geuder is associate director for public information at Mississippi State University. A native of West Point, Mississippi, she holds a master's degree in English from the University of Alabama. She has previously written about actress Tallulah Bankhead and artist Bill Traylor for Alabama Heritage. 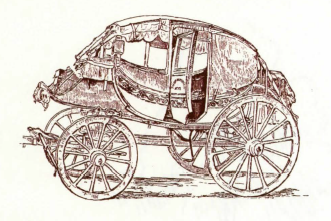 This double-article recounts the experiences of travelers in Alabama in the early- to mid-nineteenth century. They came by the dozens--pilgrims, speculators, stage-drivers, slaves, innkeepers and doomed Indians.  They came from England, from Scotland and Ireland and Germany. They came from France.  They came with pen and paper, ready to record their adventures in this opening land. Their travels took them along the Federal Road, a highway now long since faded into obscurity, leaving only the faintest trace of its former existence.

Travels in North America is the account of one such traveler. In this excerpt, Captain Basil Hall of the Royal Navy recounts his travels among the Creeks.

Additional Information
About the Author
Jerry Brown, a professor of journalism at Auburn University, was raised on a farm in Clarke County, Alabama. He is descended from South Carolina and Georgia pioneers who passed over the Federal Road. Brown holds a master's degree in creative writing from Hollins College and a Ph.D. in English from Vanderbilt. He has edited an anthology of Alabama writings entitled Clearings in the Thicket: An Alabama Humanities Reader (Mercer University Press, 1985) and is coauthor with H. D. Southerland, Jr., of The Federal Road through Georgia, the Creek Nation, and Alabama, published in 1989 by the University of Alabama Press, Tuscaloosa, Alabama, 35487-0390. Phone:(205) 348-5180. Southerland, now retired, served as commandant of the United States Army Reserve School in Birmingham.
Back to Top 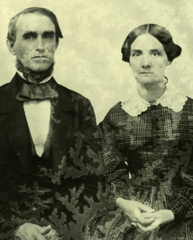 Henry Tutwiler married Julia Ashe in 1835. Their daughter Julia Strudwick Tutwiler, one of eleven children, was born in 1841. A teacher in her own right, Julia Ashe gave her children "early reading lessons, by methods advanced for the time." (Courtesy George Burke Johnson)

Julia Tutwiler, educator and social reformer, wanted to change the world--or, at least, change Alabama. Part one of a two-part series, this article examines her preparation for that formidable challenge. It covers the period from her birth in 1841, through her European travels, to her return in 1878. Julia Tutwiler would prove to be a powerful influence on Alabama. This is her story.

Additional Information
Lyon, Ralph M. Julia Tutwiler (Alabama-Tombigbee Rivers Regional Planning and Development Commission, 1976).
Moore, Eoline Wallace. "Julia Tutwiler: Teacher," Birmingham-Southern College Bulletin XXVII (January 1934).
Pannell, Anne Gary, and Dorothea E. Wyatt. Julia Tutwiler and Social Progress in Alabama (University of Alabama Press, 1961).
And especially for young readers:
About the Author
Paul Pruitt, a native Alabamian, earned a doctoral degree in history from William and Mary. He is a librarian at the University of Alabama School of Law and teaches history at the university. Pruitt, who has always been interested in reform movements, says Julia Tutwiler is a "natural" for anyone studying Southern reform. As a woman and reformer, she was doubly an outsider, yet she mobilized the women of Alabama and prepared the way for their involvement in public life.

The illustration of Henry and Julia Tutwiler on page 39 appears in the book Thomas Chalmers McCorvey: Teacher, Poet, Historian and is used by permission of George Burke Johnston.
Back to Top

In the 1840s, John Jay Crocheron, a patrician New Yorker-turned-planter, had a unique house built on his property. Though it was located on a plantation, there is a Manhattan air of sophistication about the place, setting it apart from the typical Greek Revival-style plantation houses in this part of the world. The designer of Elm Bluff remains shrouded in mystery, but the house displays the signature of an accomplished architect. Even in its decay, Elm Bluff remains a beautiful, tantalizing mystery.

About the Author
Robert Gamble is senior architectural historian for the Alabama Historical Commission, Montgomery.
Back to Top