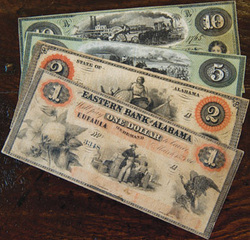 One of the country’s most impressive privately held collections of unique and rare documents, books, and photographs is located in a beautifully renovated historic storefront in Eufaula, Alabama. This collection—pertaining to Alabama, southern, and American history—has been a labor of love for decades for owner Steve Williams, who acquired much of this stunning treasure with the help of Steven Rowe, who now serves as the collection’s curator and wrote this article forAlabama Heritage. The two-story Eufaula Athenaeum holds the memories of everything from colonial America to the civil rights movement and includes one-of-a-kind photographs, first editions of classics, documents discussing the nation’s founders, documents signed by many of America’s most notable historical figures, and forty-five unique Confederate imprints (of 450 total). Best of all, Williams makes his collection available to researchers, rendering this immense private collection of value to the public.

About the Author
Stephen M. Rowe is currently archivist and curator of the Eufaula Athenaeum. A native of Richmond, Virginia, and a graduate of North Carolina State University at Raleigh, he has been in his present position since 2005. From 1974 to 1977, he was an assistant archivist at the Colonial Williamsburg Foundation. His ongoing profession since 1983 is that of antiquarian bookseller and appraiser. It was the broadening of the Civil War collection at the Eufaula Athenaeum that brought the Athenaeum’s founder, Steve Williams, together with Rowe. The two men were introduced in 1985 through a mutual friend. Rowe specializes in books and other materials, including photography and manuscripts, relating to the Confederacy. Rowe’s training as a historian and archivist and his long association with Williams brought Rowe to Eufaula in 2005 to oversee the day-to-day operations of the museum and to direct the ongoing cataloging effort. 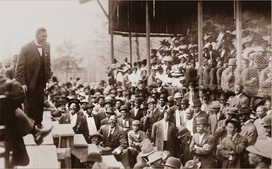 In the early twentieth century, African American intellectual and orator Booker T. Washington always drew a crowd. In 1902 Washington was invited to speak at Shiloh Baptist Church in Birmingham during a National Baptist Convention. Not surprisingly, the event garnered much attention, and the crowd grew to several thousand on the night of September 19, 1902, packing the room, balcony, outer stairs, and lawn with guests from all over the South. In this article, James L. Baggett describes how a shout misinterpreted as “Fire!” set off a panic, causing a massive stampede that took the lives of 120 people. It was a painful memory for Booker T. Washington and many others, but created such a stir of sympathy in Birmingham that, for one brief golden moment, racial tensions were forgotten.

About the Authors
Jim Baggett is head of the Department of Archives and Manuscripts at the Birmingham Public Library and archivist for the City of Birmingham. He holds an MA in history from UAB and an MLIS from the University of Alabama. He has served as president of the Society of Alabama Archivists and chair of the Jefferson County Historical Commission. Jim is an occasional contributor to Alabama Heritage and the author or editor of three books on Birmingham history, including Historic Photos of Birmingham (Turner Publishing Company, 2006).
Back to Top 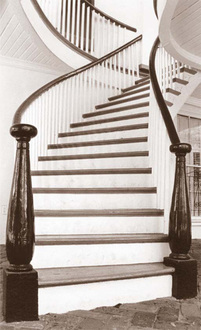 Photography by Sheila HaglerIn the early decades of the nineteenth century, Mobile was becoming a thriving port city of the South. However, much of the architecture did not boast of the economic prosperity and growth that was taking place during that time period. John S. Sledge discusses how, in the aftermath of a devastating fire that consumed most of the city, a revival of classical architecture flourished. This revival produced many landmarks that still testify to the spirit of hope and cultural celebration surrounding that generation. The article visits some of these landmarks, including the City Hospital, the main building at Spring Hill College, and the lovely Oakleigh residence, and offers glimpses of the lives of the men who built or helped build them. The blending of architectural styles of the Gulf Coast and classic Western architecture illustrates the unique flavor of the Greek Revival in nineteenth-century Mobile.

About the Author
John Sledge was born in Gainesville, Florida, in 1957 and moved with his family to central Alabama in 1962. He grew up in Montevallo but has deep roots on the Gulf Coast. His mother lived in the Pontalba Building in New Orleans as a child, and his father grew up in Georgia Cottage on Springhill Avenue, home of Victorian authoress Augusta Evans Wilson. Sledge holds a BA in history and Spanish from Auburn University and a master’s degree in historic preservation from Middle Tennessee State University. He is an architectural historian with the Mobile Historic Development Commission, where he has worked since 1985. In partnership with Grand Bay photographer Sheila Hagler, he is the author of three books, Cities of Silence: A Guide to Mobile’s Historic Cemeteries (University of Alabama Press, 2002), An Ornament to the City: Old Mobile Ironwork (University of Georgia Press, 2006), and The Pillared City: Greek Revival Mobile (University of Georgia Press, 2009). In addition, Sledge is books editor for the Mobile Press-Register. He and his wife live in Fairhope. 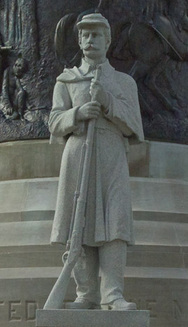 This statue of a soldier
is part of the Confederate Memorial
in Montgomery
(Robin McDonald)
Becoming Alabama: A Time Rich in Historical Remembrances

The next five years will see milestone anniversaries of numerous events that shaped and defined Alabama’s history. These anniversaries all surround three major historical and cultural conflicts—the Creek War, the Civil War, and the civil rights movement—all of which are essential to understanding how Alabama became what it is today. This article introduces a collaborative venture of cultural organizations all over the state to commemorate cooperatively a program they call “Becoming Alabama.” Edwin C. Bridges describes how each of these core events shaped the next, and why the simultaneous commemorations offer a great opportunity to understand the complexity of “becoming Alabama.” A sidebar by Steve Murray introduces the actual Becoming Alabama program with information for those who want to participate.

Alabama Heritage will play its part in the new program by launching a new department to run for the duration—the first piece of which is included here. Quarter by quarter, authors Joseph Pearson, Megan Bever, and Matthew Downs will take readers back to the three periods 200, 150, and 50 years ago, revealing what was on the minds of our forebears as wars and conflicts unfolded. The first issue discusses the impact of settlers squatting on Creek lands in 1810, the tensions surrounding the presidential election of 1860, and the beginning of the sit-in movement in 1960. These articles, along with information about upcoming events to commemorate the anniversaries surrounding these three conflicts, are all part of an initiative to share and celebrate the history of Alabama.

The new department is done in partnership with the University of Alabama History Department, the Summersell Center for the Study of the South, and the Alabama Tourism Department.

For more, visit the Becoming Alabama section of our website.

About the Author
Ed Bridges has been director of the Alabama Department of Archives and History since 1982. He grew up in Bainbridge, Georgia, graduated from Furman University, and received his PhD from the University of Chicago. He taught high school and college and then worked at the Georgia Department of Archives and History before being appointed director of the Alabama Archives. He has been active in national archival organizations as well as in Alabama history activities across the state. The Alabama Archives was the nation’s first state historical agency and has long been a center for the study of Alabama history. 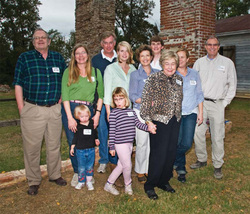 Preservation, while crucially important to maintaining Alabama’s heritage, often takes curious and creative forms. Here, Betsy Gaines Crosby recounts her family’s efforts to maintain Roseland, a family plantation. After securing a spot for Roseland on the National Register of Historic Places, the family’s preservation efforts began in full. Crosby details the intricate steps a family and community took to ensure the preservation of their historic structure.

About the Author
Betsy Crosby lives in Atlanta and writes about the decorative arts, preservation, and travel. She is currently working on a family history of Roseland. Robert Gamble, senior architectural historian for the Alabama Historical Commission, serves as the standing editor of the “Southern Architecture and Preservation” department of Alabama Heritage.

Members of the First and Ten Club
pose with Gen. Colin Powell
(University of Alabama)
Recollections
Colin Powell and a Nearly Perfect Plan

After the University of Alabama football team won the 1992 National Championship, the excitement was only beginning. Jack Owens recounts the day Gen. Colin Powell visited the team in March 1993, just ahead of a freak snowstorm. Despite meticulous planning, Owens faced the unexpected challenge of getting the general out of town before weather conditions shut him in.

About the Author
Jack Owens, a graduate of the University of Alabama School of Law, was an FBI agent for thirty years. This article was adapted from his book Don’t Shoot! We’re Republicans! (History Publishing Company, 2009). 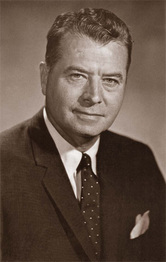 As the first installment in Alabama Heritage’s new department, Amber Baker’s oral history collects the memories of one prominent Alabamian. James D. Martin’s multifaceted role in Alabama’s political and economic life has led to many memorable moments, highlights of which are collected here. Former congressman Martin reflects on his role as the state commissioner of conservation and natural resources, and specifically on the establishment of the state’s “Forever Wild” land and wildlife conservation program.

About the Author
Amber Baker is an undergraduate history major and research assistant with the Summersell Center for the Study of the South—cosponsor of the Alabama Oral History Project, in cooperation with the Hoole Special Collections Library at the University of Alabama. To listen to the interviews and read the transcripts of oral histories collected by the Alabama Oral History Project, visit the Summersell Center web site at http://www.scss.ua.edu. 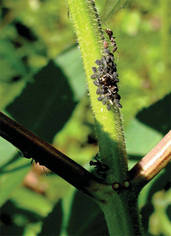 Biologist Larry Davenport connects his childhood memories of farming with the life cycle of ants and aphids, producing an informative and colorful account of these insects and their reproductive rituals.