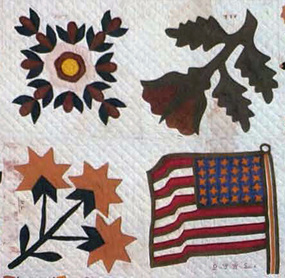 A detail from the Lanford album quilt. (Courtesy
Birmingham Museum of Art and
Robert and Helen Cargo)
Stitches in Time: The Lanford Album Quilt

An old quilt invites questions: When was it made? Why, and by whom? One answers such questions hesitantly, if at all, for quilts, like most personal items  whose histories trail along with them from one generation to the next, are difficult to document. In rare instances, however, one comes upon a quilt whose story is stitched into the fabric itself, left there by the artisans years earlier for anyone interested enough to look. Such is the case with the Lanford quilt, and the story it tells offers a rare glimpse into the life of one small community in the Alabama Black Belt three years before the Civil War began.

About the Authors
Robert Cargo, professor of romance languages and classics at the University of Alabama, has been studying and collecting quilts for more than thirty years. G. Ward Hubbs, a local historian, is currently writing an illustrated history of Tuscaloosa County. Recently, Cargo and Hubbs pooled their talents to unravel the history of the Lanford album quilt, which has been part of Robert and Helen Cargo's extensive quilt collection since 1970.

First exhibited in 1970 at a local showing in Marion, Alabama, the Lanford quilt has subsequently been displayed at an exhibition organized in 1981 by the Birmingham Museum of Art (also shown at the Montgomery Museum of Art) and was included in the catalogue accompanying that exhibit: Black Belt to Hill Country: Alabama Quilts from the Robert and Helen Cargo Collection (Birmingham Museum of Art, 1982). More recently, the Lanford quilt was one of five quilts
selected for the first major Southern folk art exhibition at the Museum of American Folk Art in New York (May 15-August 25, 1985), an exhibition now touring the South. The Lanford quilt is included in the catalogue accompanying the
exhibit: Cynthia Elyce Rubin, ed., Southern Folk Art, (Oxmoor House, 1985).

For their assistance in identifying plants in the quilt design, the authors wish to thank botanists Larry Davenport of Samford University, and Charles O'Kelley and Robert Haynes of the University of Alabama.
Back to Top 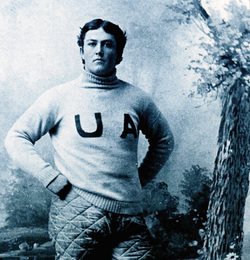 
Southerners, taken as a whole, seem to take sports more seriously than people in other parts of America. Stock car racing, football, baseball and basketball bulk large in the South as important entertainments. These sports provide a lens through which to view the changing nature of Southern society as it moved from agrarian to industrialized. Fred Hobson argues that high school and college sports, in particular, provide the South with an organic, indigenous, almost religious experience. It is an experience that is, he argues, uniquely Southern.

Additional Information
For more of Hobson's views on the South, see:

About the Author
In his essay "The Sporting Life," Fred Hobson, a native North Carolinian, brings together two of his lifelong passions--sports (a subject on which he rarely writes) and the South (a subject he writes about frequently). Hobson began his writing career on the editorial staff of the Winston-Salem Journal and Sentinel, where he and his fellow editorial writers shared the 1970 Pulitzer prize for Meritorious Public Service for a series of editorials. After completing a Ph.D. at the University of North Carolina in 1972, Hobson joined the English faculty at the University of Alabama, where, in 1985, he received the Burnum Distinguished Faculty Award for excellence in research and teaching.
Back to Top 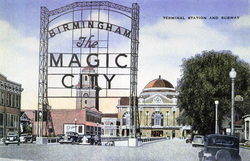 Since the birth of Birmingham in a cornfield after the Civil War, the politicos who controlled city government have been the subject of local and sometimes national controversies.  Through the 115 years of Birmingham's history to 1986, its government has been surrounded by charges of corruption, of demagogy, of political payoffs. The conflicts have been colorful and fierce. In this article, Leah Rawls Atkins traces the history of Birmingham politics from the creation of the city in the Reconstruction South until the eve of the Civil Rights movement.

About the Author
Leah Rawls Atkins, a Birmingham native, holds a doctorate in history from Auburn University. She has taught at Auburn, at the University of Alabama at Birmingham, and at Samford University, where she was a member of the history faculty for thirteen years. In 1985, Atkins returned to Auburn University as director of the Center for the Arts and Humanities, housed in the historic nineteenth-century cottage, Pebble Hill. Atkins' illustrated history of Birmingham and Jefferson County, The Valley and the Hills (Windsor Press, 1981), traces the history of the area from settlement to the present.
Back to Top 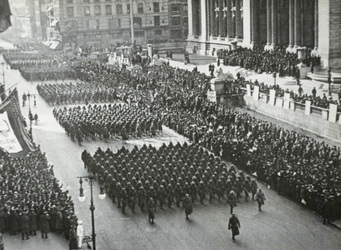 
James Reese Europe was an African American arranger, orchestrator, conductor, and songwriter--a star of the early twentieth century. He took jazz from the saloons and made it respectable; New York's elite learned to stumble through the tango and the maxixe to the music of Europe's Society Orchestra. During World War I, Europe led a brass band for the army, and when the war ended huge crows lined Fifth Avenue in New York to watch Europe's regiment--dubbed the "Hellfighters"--return. Europe's reputation has suffered in part because he was a transitional figure, difficult for historians to place. He had, however, a pioneering role as the initiator of a number of important directions in American and Afro-American musical history.

Additional Information
Recorded examples of Jim Europe's music can be heard on two albums in the New World Records series: "Steppin' on the Gas: Rags to Jazz, 1913-1927," and "Shuffle Along." The liner notes by Lawrence Gushee and Robert Kimbal, respectively, are especially recommended.

About the Author
Reid Badger, associate professor of American studies at the University of Alabama, holds an undergraduate degree from the United States Naval Academy and a doctorate from Syracuse University, where he specialized in the study of late Victorian and early twentieth-century America. A member of the University of Alabama faculty since 1974, he has taught courses in American popular music and jazz for several years and is currently studying the impact of the South on the national culture in the 1920s. The author wishes to thank Mr. James Reese Europe, Jr., for his assistance in compiling information for this article.
Back to Top