In the dead of winter, 1807, one of the most infamous men of the 19th century was hiding out in the rough-and-tumble backwoods just north of Spanish-held Mobile. Former vice president of the United States, the man who shot Alexander Hamilton, suspected traitor to his country and fugitive from the law—it was Aaron Burr himself. Recognizing him by the infamous glitter of his black eyes and an aristocratic aura that seemed misplaced in the wilderness, Nicholas Perkins, a federal land registrar, finally caught Aaron Burr, but it would be up to history to pose a greater question: What exactly was he guilty of?

About the Author
Aaron Welborn is a former assistant editor and frequent contributor to Alabama Heritage. He earned a B.A. in English from Birmingham-Southern College and an M.F.A. in Creative Writing from the University of Alabama. A resident of Missouri, Aaron works in the African and African American Studies Program at Washington University in St. Louis.
Back to Top 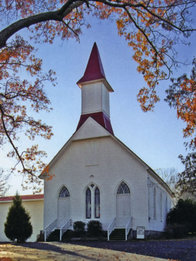 When the Tennessee Valley Authority (TVA) approved the construction of Pickwick Landing Dam, it signaled an era of progress in the Tennessee Valley Region. However, several communities were sacrificed in exchange for the dam’s technological and recreational benefits. Two such towns, Waterloo and Riverton, Alabama, were flooded by Pickwick Dam, and their residents were forced to relocate. Today, remnants of these lost towns exist only in memories, history books, and under the waters of the Pickwick Reservoir, but prior to their destruction in the 1930s, these towns were active centers of Alabama life.

About the Author
Patricia Bernard Ezzell, author of TVA Photography: Thirty Years of Life in the Tennessee Valley, has held the position of historian with the Tennessee Valley Authority (TVA) for the past eighteen years. She holds an M.A. in history with an emphasis in historic preservation and a B.A. in honors history, both from the University of Tennessee, Knoxville. In her position with the TVA, she serves as the agency’s specialist regarding its history and is the primary contact person for information pertaining to TVA’s past. She manages and curates TVA’s Historic Photograph Collection and Cemetery Records database and provides input to questions of historical significance regarding Section 106 compliance. She also serves as TVA’s Native American Liaison with federally recognized tribes. She is a member of the National Council on Public History, the National Trust for Historic Preservation, the American Association for State and Local History, and local historic preservation groups. She would like to thank Arlene Royer and Nancy Proctor for their help in locating sources, and her husband Tim for his help and advice. 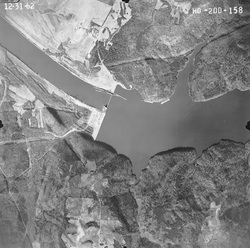 Guntersville Dam, as seen in 1962
(University of Alabama Map Library)
Before the Flood: Emergency Archaeology in the Tennessee Valley

The fertile valley surrounding the Tennessee River and its tributaries has a long history of Native American settlement. Living off of the rich soil and the abundant fish and shellfish furnished by the river, camps have dotted the banks for eleven thousand years. The valley is littered with bone, pottery, and stone artifacts. But in the 1930s, plans by the Tennessee Valley Authority (TVA) called for a series of dams that would furnish a major supply of hydroelectricity to the area, and usher in a modern age for the Southeast. A team of concerned individuals, including several professional archaeologists, banded together to ensure that the artifacts were not lost beneath the waters that were soon to rise behind the freshly constructed dams.

About the Author
Eugene M. Futato received his M.A. in anthropology from the University of Alabama in 1973 and has been on the staff of the university since that time. He currently serves as deputy director of the University of Alabama Museums, Office of Archaeological Research, and as the museums’ curator of Archaeological Collections. Much of his work has centered on the archaeology of the Middle Tennessee Valley, beginning with his first field school in 1969. His research from 1971 through 1985 was almost exclusively under contract with the Tennessee Valley Authority. Since 1982, he has been responsible for curation of all TVA/WPA archaeological collections from Alabama. His research and publication on these collections and their history continues to the present.
Back to Top 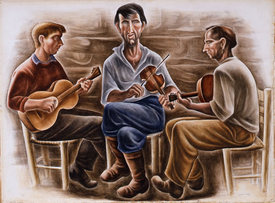 Guggenheim recipient Howard Cook chose to spend his grant money on a tour of the Old South, from Virginia to Texas. It was an attempt to live among the subjects he rendered in his art, to observe the native customs and folk, and to gain a greater appreciation for them, which would shine through in his work. In the autumn of 1934, he and his wife, Barbara Latham (also an artist) journeyed through the Alabama Black Belt, sketching their experiences as they went. Witness to an African American baptism and footwashing, a fiddlers’ contest, and the world of the Birmingham steelworkers, Cook found plenty of inspiration, and created a portfolio of expressive artwork that tells the story of his odyssey through the South.

About the Author
Stephen J. Goldfarb holds a Ph.D. in the history of science and technology from Case Western Reserve University. He is curating the exhibit entitled “Howard Cook: Drawings of Alabama” for the Mobile Museum of Art; the exhibit will be on display from January 12 to April 15, 2007 and at the Huntsville Museum of Art from January 27 to April 13, 2008. Goldfarb has written articles previously for Alabama Heritage on artists Marian Acker Macpherson and Lucille Douglass. He now serves Alabama Heritage as a contributing editor for our new “Reading the Southern Past” column. No stranger to Southern reading tastes, Goldfarb retired from the Atlanta-Fulton Public Library in 2003. He has reviewed books for both newspapers and scholarly journals. 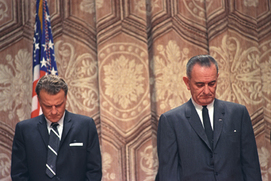 As one of the world’s most well-known evangelists, Billy Graham’s crusades have taken him all over the globe. Yet his role in the South during the Civil Rights Era, particularly his work at easing Alabama’s racial tensions, often is overlooked. Beginning with his Easter Day rally at Birmingham’s Legion Field in 1964, Graham went on to hold six additional desegregated crusades in Alabama the following year. A friend of both Martin Luther King and George Wallace, Graham managed to bridge the racial divide of white and black Alabama through the terms of his faith.

Additional InformationThe following articles in the Encyclopedia of Alabama will also be of interest:
About the Author
Steven P. Miller received a Ph.D. in history from Vanderbilt University in May 2006. This article is partly drawn from his dissertation, titled “The Politics of Decency: Billy Graham, Evangelicalism, and the End of the Solid South, 1950-1980.” His book manuscript of the same title is under contract with the University of Pennsylvania Press. Miller’s work has appeared in a number of academic publications, including the Journal of Southern Religion and Georgia Historical Quarterly, and in Glenn Feldman’s Politics and Religion in the White South (University of Kentucky Press). Miller grew up in Stuarts Draft, Va., and received his B.A. from Goshen (Ind.) College in 1999. He currently teaches at Webster University in Saint Louis.
Back to Top 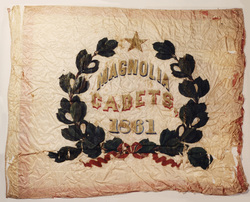 During the Civil War, Selma’s Magnolia Cadets, under the leadership of Captain N. H. R. Dawson, were represented by their company flag, designed by the half-sisters of First Lady Mary Todd Lincoln. These flags, each unique in design, not only served as military banners but are Civil War–period works of art as well.

Additional Information
The following articles in the Encyclopedia of Alabama will also be of interest:
About the Author
Robert Bradley, Chief Curator, Alabama Dept. of Archives and History, is an expert on Alabama’s Civil War flags. 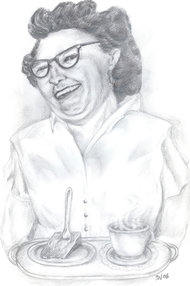 Over the course of some thirty years, Alabama’s most prolific serial killer, Nannie Doss, murdered four of her five husbands and numberous other family members, often by poisoning the meals she prepared for them. Due to her lack of remorse, her flirtatious demeanor, and her affection for romance stories, she became known nationwide as "The Giggling Granny."

About the Author
Pamela Jones is a freelance writer in Birmingham with a particular interest in criminal cases from Alabama’s past.
Back to Top
Reading the Southern Past
Alabama, In General

Using personal experiences and scholarly awareness to illuminate their home state, Wayne Flynt and Harvey H. Jackson have both penned histories of Alabama, titled Alabama in the Twentieth Century and Inside Alabama. Stephen Goldfarb summarizes each academician’s take on Alabama’s past.

About the Author
Stephen J. Goldfarb holds a Ph.D. in the history of science and technology from Case Western Reserve University. Goldfarb retired from the Atlanta-Fulton Public Library in 2003. He has reviewed books for both newspapers and scholarly journals.
Back to Top