World War II changed American society. With the men fighting overseas, it fell to women--formerly excluded from many areas of life--to take up the slack. And so they did. All over America, women went to work--in shipyards and in Foundries, in gin companies and at the TVA. The labors of these women carried America through the war. But the question remains: after the war, after the fighting, when the men had returned home at last, what really changed?

This article includes sidebars featuring the personal stories of many of the women who went to work during the war.

About the Author
Mary Martha Thomas, professor of history at Jacksonville State University, teaches courses in the history of American women and in U.S. and constitutional history. Thomas, who holds a doctorate in history from Emory University, is the author of three books--a history of Southern Methodist University, a history of Alabama women during World War II (Riveting and Rationing in Dixie: Alabama Women and the Second World War, University of Alabama Press, 1987), on which this article is largely based, and a forthcoming volume from the University of Alabama Press (The New Woman in the New South: Alabama Women, Social Reforms and Suffrage, 1890 to 1920).

The editors wish to thank Faye Colburn and Jan Vulevich for locating and interviewing many of the women workers; thanks also to Richard C. Sheridan, coordinator of the Tennessee Valley Authority Historic Collections, for the use of TVA photographs.
Back to Top 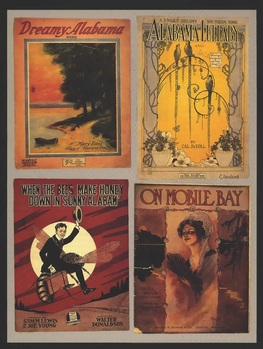 In 1990 Wade Hall, an avid collector of books, manuscripts, music, and photographs that document the South and its people, donated his collection of sheet music to the William Stanley Hoole Special Collections Library, University of Alabama, greatly enriching the University's extensive sheet music collection. The Hall collection contains rare items and music dating from the early twentieth century, including many items related to Alabama--either published in the state by native composers or containing lyrics about Alabama. This article offers a look inside the collection.
Buy This Feature
Additional Information
Recordings:
New World Records: Recorded Anthology of American Music (New World Records, 1976 to present). Much of the music of the Tin Pan Alley era is recorded in this series. Dust jackets contain a great deal of information about the recordings. Among the most notable recordings in the series are the following:

About the Author
Cheryl Taranto, music and audio-visual cataloger, Amelia Gayle Gorgas Library, University of Alabama, is currently completing her Ph.D. in musicology at Louisiana State University and writing her dissertation on songsters and political music in the early nineteenth century.

Wade Hall, whose sheet music collection is the source of Taranto's article, is a professor of English at Bellamine College, Louisville, Kentucky, and an avid collector of books, manuscripts, music, and photographs that document the South and its people. He attended undergraduate school at Troy State University and received his master's degree in English from the University of Alabama. Hall edits Kentucky Poetry Review and hosts a weekly program on PBS in Louisville, "Wade Hall's Kentucky Desk."
Back to Top
Excerpts from Hammer and Hoe: Alabama Communists during the Great Depression

Between 1929 and 1941, the Communist Party organized and led a militantly antiracist movement in Alabama--the center of Party activity in the Depression South. Built from scratch by working people, the Alabama Communist Party was composed largely of poor blacks, most of whom were semiliterate and devoutly religious, but it also attracted a handful of whites, including unemployed industrial workers, iconoclastic youth and women, and renegade liberals.

In Hammer and Hoe, recently published by the University of North Carolina Press, Professor Robin Kelley documents the efforts of the Communist Party to secure economic and political reforms in Alabama during the Great Depression. This excerpt deals with the beginnings of the Communist Party in Birmingham and rural Alabama, particularly Tallapoosa County.

About the Author
Robin Kelley, a native of Harlem, received his M.A. in African history and Ph.D. in American and African-American history from the University of California at Los Angeles. Currently an associate professor of history and African-American studies at the University of Michigan, Ann Arbor, Kelley is working on a second book tentatively titled Under
Class Struggle: Birmingham's Black Poor, 1945- 1990.

Hammer and Hoe, Alabama Communists during the Great Depression, was recently published by The University of North Carolina Press, P.O. Box 2288, Chapel Hill, NC 27512.
Back to Top