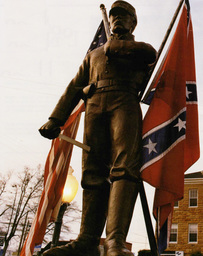 By Donald B. Dodd

With a Confederate draft imminent and Federal troops threatening an invasion of north Alabama, the leaders of Winston County called a meeting at Looney’s Tavern, near present-day Addison. More than 2,500 people from Winston and surrounding counties attended. The assembly simply announced their neutrality, but a remark made about “The Free State of Winston” spread quickly around the state, and the hill people of northwest Alabama gained a reputation as “traitors.” Author Donald Dodd, a native of Winston County, recounts the dual heritage of the northwestern county. Not only did Winston County have strong anti-secession beliefs, this area became a natural sanctuary for those whose enthusiasm for the war effort had waned. Winston County and the Unionists of Alabama remained a thorn in the side of the Confederacy throughout the war, according to Dodd. A statue of a composite soldier – half Union, half Confederate – stands in front of the Winston County Courthouse, poignantly symbolizing the war within a war and honoring Winstonians who served in both armies.

Additional Information
The following articles in the Encyclopedia of Alabama will also be of interest:
Multimedia:
Readers who have information on the Brooks family of Winston County are asked to contact Edward Herring, who is researching the family hi story, at P. O. Box 61, Moulton, AL 35650. For information on the outdoor musical drama, "The Incident at Looney's Tavern," performed from June through September three miles east of Double Springs on Smith Lake, contact Looney's Tavern Productions, Inc., P. O. Box 70, Double Springs, AL 35553, (205) 489-5000.

About the Author
Don Dodd, a professor of hi story at Auburn University at Montgomery, holds a Ph.D. from the University of Georgia. A native of Winston County, Alabama, Dodd began his study of northwest Alabama history while a graduate student at Auburn University, where he wrote his master's thesis on mountain Unionism in Confederate Alabama. He is the author,
along with Wynelle Shaddix Dodd, of Winston: An Antebellum and Civil War History of a Hill County of Northwest Alabama, which is available from Northwest Alabama Publishing Company, 1700 Birmingham Avenue, Jasper, AL 35501.

The author wishes to thank the following individuals for their assistance with this article: Amy Bartlett-Dodd, Paula Drinkard , Wynelle Shaddix Dodd, Lou Scheuchenzuber, Bettye Steele Watters, and Leola Looney Hessom.
Back to Top
The Diary of a Union Soldier from Alabama

In this excerpt from his autobiography, John Phillips recounts his harrowing escapes from the Confederate army and his desperate flight to Union lines. Like many of his neighbors, Phillips opposed secession and hoped to remain neutral in the Civil War before he was conscripted into the Confederate army. He escaped, hid in the woods of Winston County, and eventually joined the First Alabama Cavalry, U.S.A. He records those troubled years in his autobiography, My Life Story, published in 1923: “We had a tough old time, our food gave out, and of all the tired, worn out, hungry set you could imagine, we were that…The raggedest, bare-footedest and most hatless set you ever saw.”

About the Author
John Philips, born in 1837 in North Carolina, migrated to northwest Alabama in 1858 and settled in Marion County. Like many of his neighbors, Phillips opposed secession and hoped to remain neutral in the Civil War. Conscripted into the Confederate army, he escaped, hid in the woods of Winston County, and eventually joined the First Alabama Cavalry, U.S.A., comprised almost entirely of men from northwest Alabama. Years later, Phillips left his own record of those troubled years in his autobiography, My Life Story, published in 1923.
Back to Top 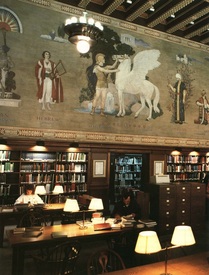 At the first opening of the Birmingham Public Library on April 11, 1927, much of the public's awe focused on the work of New York artist Ezra Winter, one of the most respected American muralists of his day. Best remembered now for his murals in New York's Radio City Music Hall, the Library of Congress and the U. S. Supreme Court building in Washington, D. C., Winter emblazoned the Birmingham, Alabama, library interior with elegant design and color. He painted fanciful characters in the Children's Room, and a series of scenes from world literature in the Reading Room. This article is beautifully illustrated with full-color photographs of the mural subjects such as John Smith and Pocahontas, Lancelot, and Sigurd and Brynhild.
Buy This Feature
Additional Information
The following article in the Encyclopedia of Alabama will also be of interest:Multimedia:

About the Author
"Birmingham is my home," writes George Thompson, "and notwithstanding a few warts and some noticeable battle scars, it seems the right place to live and raise a family." Thompson's love of Birmingham did not extend to its public library until recent years. "In fact, all through school I avoided libraries for fear they would prompt an extreme allergic reaction." Thompson has since overcome his "pedagogical paranoia" and is now a familiar face at the Birmingham Public Library, where, he says, his favorite spot is the main floor Reading Room housing the Southern History Collection. "I am glad to become acquainted with one of Birmingham's gems."

Thompson, who holds degrees from Auburn (1973) and Vanderbilt (1987), is the author of "Vulcan: Birmingham's Man of Iron," which appeared in Alabama Heritage #20, Spring 1991. In his extensive research for this article, Thompson conducted numerous interviews, and he and two talented Alabama Heritage interns, Stella Connell and Suzanne Henson, combed newspapers, magazines, and reference volumes, and made calls to libraries around the country. Finally, in an effort to locate Winter's descendants, Henson placed notices in several small newspapers in New England, where Winter had lived. To everyone's delight, Henson received a call from Dr. Joyce Hunter, of Hawaii, one of Winter's granddaughters, who had learned of our newspaper query. Later, Lynda Evans of Trenton, New Jersey, another granddaughter, was located. With the family's help, the article came together.

Other valuable assistance came from Lee Viverette, Archives of American Art, and George Stewart, Anne Knight, Carol Hunter, and Sharon Hill of the Birmingham Public Library.
Back to Top 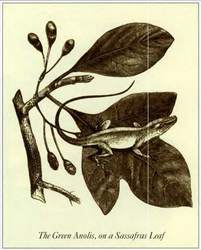 Philip Henry Gosse: An Englishman in the Alabama Black Belt

In this engaging story, an English naturalist provides a rare and thoughtful view of plantation society in antebellum Alabama. Author Harvey Jackson writes "Alabama, (Gosse) was told, was a place where men of learning like himself were sought and prized" and with that, Philip Henry Gosse (1810-1888) set out on an adventure in Alabama, landing in Mobile, then on to King's Landing, south of Selma. He worked as a teacher of the children of several elite families, living closely with these early settlers of Alabama and "document(ing) regional distinctiveness in its early stages of development." He detailed the food they enjoyed, their topics of conversation, their humor, and social mores.
Buy This Feature
Additional Information
The following article in the Encyclopedia of Alabama will also be of interest:Multimedia:

About the Author
Harvey Jackson is professor of history and head of the history department at Jacksonville State University. Though he grew up in Clarke County, which is below the Black Belt, he lived in Selma briefly as a child, and he still has family in that unique section of the state. One of them, his "cousin-in-law" Kathryn Tucker Windham, recently accompanied him on a tour of sites Gosse might have visited. That tour, says Jackson, was a great help in preparing this article, as well as the introduction Jackson has written for the new edition of Gosse's Letters, Letters from Alabama, published by the University of Alabama Press this year in the Library of Alabama Classics.
Back to Top

Art in the South
Sully’s Portrait of an Alabama Beauty

The little-known portrait of Temperance Fitts Crawford of Mobile, now hanging in the Alabama Department of Archives and History in Montgomery, is a jewel. It was painted in 1837 by Thomas Sully (1783-1872), the most popular American portrait artist of his day. Although almost nothing is known of Mrs. Crawford's life, this portrait gives observers a valuable window into history.

About the Author
Robert O. Mellown is an associate professor of art at the University of Alabama and a frequent contributor to
Alabama Heritage.
Back to Top
The Nature Journal
Article Update: The Cahaba Lily (Revisited)

In May 1990, Alabama Heritage published an essay by botanist Larry Davenport on the Cahaba lily. Since then, readers have kept up a steady flow of questions and commetns about this plant, and researchers have discovered new knowledge about the lily. L.J. Davenport provides an update on the flower.

Additional Information
The following article at the Encyclopedia of Alabama will also be of interest:Multimedia: