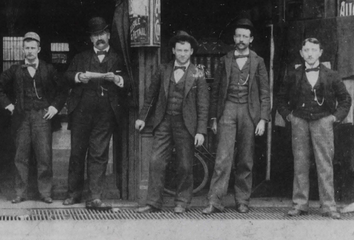 Among the successful Jewish merchants in late nineteenth-century Montgomery was Abe Weil, who established an auction house at 22 Commerce Street in 1891, offering a variety of merchandise, including dry goods, notions, furnishings, clothing, and stationary. Weil had formerly been a member of the firm of Loeb and Weil, general merchants and carriage dealers. (Courtesy Landmarks Foundation, Montgomery)
Jewish Life in Alabama: The Formative Stages

Beginning in the 18th century, Alabama and other Southern states attracted a significant number of Jewish immigrants, many from the Germanic states, who came in search of the social, economic and political freedom that had long been denied them in their homeland. Many migrated to small towns along the rivers, where they became a vital and highly respected part of their communities. This article, by historians Henry Marks and Marsha Kass Marks, chronicles the lives of pioneering Jewish families in the state and the hardships and challenges these immigrants faced.

Additional Information
Readers may also wish to explore the Judaic Studies Series published by The University of Alabama Press. Founded in 1969 and headed since its inception by Professor Leon Weinberger, general editor, the series has become one of the nation's leading programs of publication for scholarly monographs on topics of Judaic theology and history. "We are actively encouraging projects about the American Jewish experience and about Jews in the South," reports Malcolm MacDonald, director of the press. For more information contact The University of Alabama Press, P. O. Box 870380, Tuscaloosa, Alabama 35487-0380.

The following articles in the Encyclopedia of Alabama will also be of interest:Multimedia:
About the Authors
Henry Marks ha been interested in the history of Alabama since he first arrived in the state in 1958 to teach at Jacksonville State University. Marks, currently an educational consultant in Huntsville, and his wife, Marsha Kass Marks, an associate professor of history at Alabama A & M University, have collaborated on a reference work on Alabama history, Alabama's Past Leaders, published by Strode Publishers in 1982. Henry Marks is also the author of Who Was Who in Alabama (Strode Publishers, 1972), and for twenty-seven years he prepared the article on Alabama for Collier's Encyclopedia Year Book.

Little information has been published on the early period of Alabama Jewry, and the information available comes largely from pamphlets produced by congregations celebrating anniversaries of their founding. Among these are publications marking the one hundredth anniversary (1844-1944) of Congregation Sha'a ri Shomayim (Government Street Temple), Mobile; the diamond jubilee (1852-1952) of Kahl Montgomery (Temple Beth Or); the seventy-fifth anniversary (1908-1983) of Temple Beth Israel, Gadsden; and the golden anniversary (1 929-1979) of Temple Emanu-El, Dothan.

Alfred Huger Moses (1840-1918), a native of Charleston, came to Montgomery in 1860 to make his fortune. Perhaps the first American-born Jewish professional in that city. Moses would build the state's first skyscraper and found the city of Sheffield. (Courtesy Charles Raysich, Montgomery Area united Way)
The Moseses of Montgomery: The Saga of a Jewish Family in the South

This article tells the saga of a remarkable Jewish family who established the most successful real estate and insurance business in the state and built the tallest building (six stories) in 19th-century Alabama. "The Moses Family," writes Libo, curator of American Jewish History at New York’s Museum of Jewish Heritage, "became part of a new generation of lawyers, farmers and merchants who replaced the old landed aristocracy in positions of power." One brother, Mordecai Moses, was elected the first Democratic mayor of Montgomery after the Civil War, and another brother, Alfred, almost single-handedly founded the city of Sheffield.

Additional InformationThe following article in the Encyclopedia of Alabama will also be of interest:Multimedia:
About the Author
Dr. Kenneth Libo, a graduate of Dartmouth College, is author of We Lived There Too: Pioneer Jews and the Westward Movement of America (St. Martin 's Press, 1985), co-author of World of Our Fathers (Harcourt Brace Jovanovich, 1976), and coeditor of How We Lived (Richard Marek Publishers, 1979), histories of New York 's Lower East Side. Libo is curator of American Jewish History at New York's Museum of Jewish Heritage and author of a forthcoming biography of John and Frances Lehman Loeb.

The Jewish Community in Demopolis
By Anna Jacobs Singer

In shorter articles and sidebars, our Spring issue traces the lives of other Jewish immigrants to the state. Among these is the remarkable career of the Lehman brothers from Bavaria, who began as peddlers in Mobile, established a cotton brokerage firm in Montgomery, and opened a branch of their business in New York in 1858. That business today is known as Lehman Brothers, one of the most powerful investment banking firms in the world.

About the Authors
Kenneth Libo is curator of American Jewish History at New York's Museum of Jewish Heritage.

Anna Jacobs Singer is a freelance graphic designer and book designer based in Tuscaloosa, Alabama.

Marcie Cohen is the project director for the Museum of the Southern Jewish Experience.
Back to Top

Dubbed "The Butcher of Andersonville," Wirz oversaw the infamous Georgia prison camp throughout its 14-month existence. During his command, nearly 13,000 Union prisoners died from malnutrition, disease and exposure or were murdered – more deaths than at any single Civil War battle. From the beginning, Swiss-born Henry Wirz was a staunch supporter of "the Southern cause" and enlisted in the Confederate army early in the war. Author Christopher Mohney, whose great-great-great-grandfather was a Union army private who died at Andersonville, outlines the military career of Wirz, highlighting his fateful March 1864 assignment to the newly constructed prison camp. Wirz, notes Mohney, one of the Civil War’s "last victims," vehemently proclaimed his innocence until his execution for war crimes in 1865.

Additional Information:
More on Andersonville Civil War Prison
For more information on Andersonville and Wirz, contact Andersonville National Historic Site at (919) 924-0343, or see:The following article in the Encyclopedia of Alabama will also be of interest:Multimedia:
About the Author
Christopher Mohney received a Bachelor of Arts in English from the University of Alabama in 1994 and worked for Alabama Heritage as Special Project Coordinator until recently going to work for the university's External Degree Program. He will be undertaking study for a Master of Fine Arts in fiction writing in the fall of 1995. Mohney became interested in Andersonville after hearing family stories of his great-great-great-grandfather William Botkin, a private in the Forty-fifth Ohio, who was captured in Tennessee and sent to Andersonville; Botkin died on May 25, 1864, and was buried in plot 1368.

This article began as a research project which Mohney undertook as part of his internship at Alabama Heritage during the fall of 1993. Information on Andersonville and Capt. Henry Wirz can be found in many pl aces, but two of the most valuable to Mohney were the Official Record of the Civil War and Confederate Veteran magazine. The Andersonville tragedy also inspired numerous artistic endeavors, including MacKinlay Kantor's exhaustively researched 1955 novel Andersonville (which won the Pulitzer Prize) and Saul Levitt' 1959 play The Andersonville Trial (which opened at Henry Miller's Theater in New York City, with George C. Scott in the role of Col. Norton P. Chipman).

The author wishes to thank the staff of the William Stanley Hoole Special Collections Library of the University of Alabama for their patient assistance and excellent resources. Thanks also to the author's brother, Peter Mohney, for his help and the loan of source materials, and to Mimi Straas of Fayette, Mississippi, for research assistance.
Back to Top

The story of William Bullock Inge (1815-1873), whose portrait hangs in the University of Alabama's special collections library, reveals much about life in antebellum Alabama.

Robert O. Mellown is an Associate Professor of Art History at the University of Alabama
Back to Top
The Nature Journal
Chestnut Blight

Native to southeast Asia, the fungus Endothia parasitica was apparently imported into New York harbor on nursery stock. While the fungus causes only minor damage to its original host, the Asiatic chestnut, American chestnuts showed no such resistance. L.J. Davenport discusses the disastrous effects of this blight on American forests.

About the Author
L. J. Davenport is a professor of biology at Samford University, Birmingham.
Back to Top
Report from the Historical Commission
Need Help Revitalizing Downtown? Try The Alabama Main Street Program

The Alabama Main Street Program, administered by the Alabama Historical Commission, is designed to help small cities--those with populations of fifty thousand or less--revitalize their downtowns within the context of historical preservation.  Several cities have already participated in the program. Alta Hodgson discusses the benefits of this program.

Additional Information
The following articles in the Encyclopedia of Alabama will also be of interest:Multimedia

About the Author
Alta C. Hodgson coordinates the Alabama Main Street Program for the Alabama Historical Commission.
Back to Top