About the AHC/APA EHLC
The fourth annual listing of Places in Peril was prepared by a committee of preservationists from the Alabama Historical Commission, a state agency, and the Alabama Preservation Alliance, a private, nonprofit preservation organization. The committee made its selections after reviewing the extensive listings on the Preservation Watch List maintained by the commission as well as nominations from the general public.

The Crommelin saga made it into Volume 1, Number 1 of the comic book series entitled It Really Happened, published in New York in 1944. (Courtesy Katherine Crommelin Milton.)
The Crommelin Brothers

History-making seemed to come naturally to the Crommelin boys of Wetumpka, Alabama, both at sea and in the air. The five brothers made their mark in World War II, earning a series of medals and in the process becoming one of the most decorated families in naval history. Author John B. Scott, Jr., interweaves the lives and heroic acts of the Crommelin brothers with the history of the naval battles that took place in the Pacific theatre in World War II. Time magazine dubbed the Crommelin brothers "The Indestructibles" for their amazing escapes from death, but it wasn’t long before this was proved, sadly, untrue. Within three months of each other, two of the brothers, Richard and Charles, were killed in mid-air collisions with other navy planes, and "the fleet’s most famous flying family" was broken up. A monument to the Crommelins in Battleship Park in Mobile, Alabama, commemorates their bravery.

About the Author
Since retiring from active practice with the law firm of Capell, Howard, Knabe & Cobbs, Montgomery native John Scott has been writing on Alabama's history and countryside. This is his second article for Alabama Heritage. His previous contribution, on the old Clay County resort of Clairmont Springs, appeared in the fall of 1996. Memories of the Mount, Scott's history of Mt. Meigs, Alabama, was published in 1993 by Black Belt Press and received the C.J. Coley Award from the Alabama Historical Association.

The author wishes to thank the various members of the Crommelin family who assisted with the article and also former navy fighter pilot Cdr. William H. "Boots" Pierce, Jr., USN (Ret.) for his advice and insights. Thanks are also due to the United States Naval Academy, the National Institute, and the Naval Aviation Museum for the materials they furnished.
Back to Top 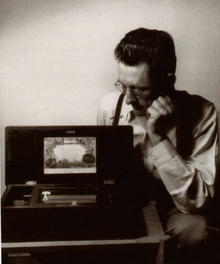 Draffus Hightower (1899-1993), photographed here studying an antique music box, was a shy, quiet man and a voracious reader who found almost any subject fascinating. In the mid-1930's, he turned his gaze to the world around him, which he documented with his camera for the next thirty years.
D.L. Hightower’s Photographs of a Vanishing World

A Clayton, Alabama, resident and the former owner of Hightower Chevrolet, Draffus Hightower was known more for his hobby of taking photographs of local people and places than for his career. Now, Hightower’s photographs of the vanishing rural culture of Barbour County serve as an important historical record for current and future generations. In an excerpt from his book, To Remember a Vanishing World: D.L. Hightower’s Photographs of Barbour County, Alabama, c. 1930-1965, Michael V. R. Thomason examines the life of Draffus Hightower and the historic record his photos have left behind. After his father’s death in 1931, Hightower committed himself to preserving the disappearing culture of his youth. In addition to his more candid photos, Hightower often photographed community events like weddings and funerals. From 1936 on, he took hundreds of portraits of the people of Barbour County, which proved to be his greatest record of the culture he sought to preserve.

Additional InformationThe following article in the Encyclopedia of Alabama will also be of interest:
About the Author
Michael Thomason is a professor of history and director of University Archives, University of South Alabama, where he has been on the faculty since 1970. Originally from Florida, Thomason has a B.A. from Sewanee and an M.A./Ph.D. from Duke University. Long interested in old photographs and the photographers who made them, he has been the author or co-author of several books of historic photographs.

Thomason reports that he felt especially drawn to Draffus Hightower after studying his work, and he now believes that Hightower is one of Alabama's and the South's finest photographers. 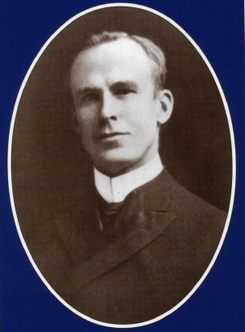 William H. Skaggs (1861-1947), the colorful mayor of Talladega, inaugurated many civic improvements- waterworks, public schools, a fire protection company- but he reguarded the day he put the sewer under the railroad tracks as one of the high points of his political career. (Courtesy Alabama Department of Archives and History.)
Notes on Alabama Law
The Talladega Sewer War, 1890

William H. Skaggs (1861-1947), the colorful mayor of Talladega, inaugurated many civic improvements--waterworks, public schools, a fire protection company--but he regarded the day he put the sewer under the railroad tracks as one of the high points of his political career. This high point came after an extended battle with the railroad company, and may well have cost Skaggs his fourth term as mayor, but he regarded the sewer as a major contribution to the civic life of Talladega.

Additional Information
The following article in the Encyclopedia of Alabama will also be of interest:
About the Author
Paul M. Pruitt, Jr., is Special Collections Librarian, University of Alabama School of Law.
Back to Top
The Nature Journal
British Soldiers (And Other Lichens)

Ubiquitous, but often overlooked, lichens inhabit some of the harshest environments on earth. For most of human history, scientists have treated lichens as single plants. We now know, however, that a lichen is actually a composite creature--part fungus and part alga, but with characteristics of its own.

About the Author
Larry Davenport is a professor of biology at Samford University, Birmingham, Alabama.
Back to Top
Southern Architecture and Preservation
Lighting Planters' Lives

As late as the middle of the nineteenth century, candles, because they were costly, were used sparingly even in the homes of Alabama's wealthiest planters. Lamps, too, were expensive as was the fuel they consumed. This article examines the variety of methods used for lighting houses during the time period.

Additional Information
The following items in the Encyclopedia of Alabama will also be of interest:
About the Author
Lee Rahe is an authority on the decorative arts of the antebellum South.
Back to Top