Ann Lowe: Couturier to the Rich and Famous

Ann Lowe, born in Clayton, Alabama, in 1898, granddaughter of a former slave, rose to great heights in the rough and tumble world of fashion design. Despite the considerable obstacles she faced as a young black woman, Lowe was, at the height of her career, the designer-of-choice for many of this country’s elite families. Indeed, she designed Jacqueline Bouvier’s wedding gown for her 1953 marriage to John F. Kennedy. "I love my clothes," she once told an interviewer, "and I’m particular about who wears them." Ann S. Smith recounts in fascinating detail the life of Ms. Lowe—her meteoric rise in New York’s fashion industry and the sometimes tragic circumstances that left her to spend her old age poor, unheralded and nearly blind.

About the Author
Ann Sutton Smith associate editor and publisher of the Eufaula Tribune, graduated Phi Beta Kappa from the University of Alabama in 1959 with a bachelor's degree in history. She holds a master's degree from Vanderbilt University and, from 1961 to 1965, was an assistant professor of history at Huntingdon College in Montgomery.

The author and editors would like to thank Cile Smith of Montgomery for suggesting the topic of this article; Esther Provenzano (who worked with Lowe) and Alice Cone (Lowe's granddaughter-in-law) for help with photographs and information.
Back to Top 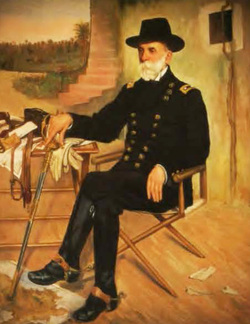 Gen. Joseph Wheeler—West Point graduate, veteran of both the Civil War and the Spanish American War, and sixteen years a U.S. congressman representing Alabama—is the only Confederate veteran buried in Arlington National Cemetery. It was a fitting tribute to a man whose greatest legacy was his promotion of the reconciliation between North and South. Mildred Witt Caudle, professor emeritus of history at Athens State College, documents the broad range of adventures Wheeler experienced in his remarkable life. Whether being attacked by a small band of Indian marauders on the road to Santa Fe, New Mexico, or fending off superior federal forces in Shelbyville, Tennessee, Wheeler always seemed to be at his best when the situation was most harrowing. Though he was a slight man—never more than 125 pounds on a five foot, five inch frame—early in his Army career he earned the nickname "Fightin’ Joe" for his ability to fight with a fury greater than his physical stature.

About the Author
Mildred Caudle, who received her Ph.D. in history from the University of Alabama, is Professor of History Emeritus at Athens State College, Athens, Alabama. Long interested in the Wheeler family and the state-owned Wheeler Plantation, Caudle has served as board member and president of the General Joe Wheeler Home Foundation and is currently chairing the Wheeler Plantation Tree Replacement Project. She is a former board member of the Alabama Preservation Alliance.
Back to Top 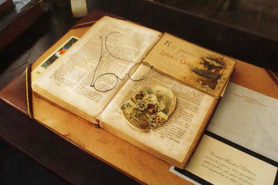 By Nanda Hopenwasser and Signe Wegener

Authors Nanda Hopenwasser and Signe Wegener recount the exploits of the indomitable Annie Wheeler. The daughter of Gen. Joseph Wheeler, Annie cut her own legacy by tirelessly attending to the well-being of others. She followed her father and brother to Cuba during the Spanish American War, serving as a nurse-volunteer, and worked in the same capacity in Europe during World War I. Her uncommon charity and inexhaustible energy made her a symbol of recovery to the soldiers in Cuba and Europe. Her compassion for other people, particularly children, made her an institution throughout the Tennessee Valley. At Annie’s funeral in 1955, when asked by a reporter what she remembered most about Annie Wheeler, a young woman said, "Annie never really approved of the phrase ‘pursuit of happiness.’ She always said that you were never made happy by seeking your own happiness, but you incidentally found your own happiness by seeking it for others."

Buy This Feature
Additional Information
For more information on General Wheeler and his daughter Annie, see:
The following item in the Encyclopedia of Alabama will also be of interest:

The authors and editors would like to thank the following people for their assistance with this article: Melissa Beasley, curator of the Wheeler Plantation; Ella Coffee of Wheeler, Alabama, a close friend of Miss Annie's; Frances Robb, photoarchivist, Huntsville, Alabama; James Baggett and Don Vesey, archivists and research librarians at the Linn-Henley Research Library of the Birmingham Public Library; and the archive librarians at the Hoole Library and Gorgas Library, University of Alabama.
Back to Top

From early in the century, license plates have offered a fertile field for collectors, many of whom nailed old plates to the walls of garages or barns. More recently, collecting license plates has become an organized hobby. Author Stephen Goldfarb explores the intertwining history of the automobile and the license plate, and their particular evolution in Alabama, from the enameled placards of the early 1900s to the more durable plates used today.

Additional Information
License plates have received little attention in the otherwise voluminous literature on the history of the automobile. For more information on license plates and the early history of the automobile, see:The following items in the Encyclopedia of Alabama will also be of interest:
About the Author
Stephen Goldfarb is on the staff of the Atlanta Fulton Public Library, Atlanta, Georgia. He holds a Ph.D. in the history of science and technology from Case Western Reserve University. The author and editors would like to thank Johnny L. Newman, assistant director of the Motor Vehicle Division, Alabama Department of Revenue, and Lee A Hallman, Tuscaloosa County License Commissioner, for their assistance with this article.

Art in the South
An Antebellum Physician

Dr. Solomon Williams Clanton (1826-1858) of Warsaw, Sumter County, Alabama, was not a major figure in Alabama history. And yet his portrait, with his medical library in the background, reveals much about the young doctor and the medical education available to Southerners in the mid-nineteenth century.

About the Author
Robert O. Mellown is a professor of art history at the University of Alabama.
Back to Top
Recollections
The First Sunday in May

Lossie Mason and George McCain married in 1931 when they were both nineteen years old. Four years later, Lossie was tragically and prematurely dead.George McCain eventually married again, but he was never able to talk about the death of his first wife. Nevertheless, Lossie remains in the memory of the McCain family; several years after the death of George, his widow still places flowers on Lossie's grave every year on the first Sunday in May.

About the Author
Lenda Haynes McCain was born in Roanoke, Alabama. She is currently on the faculty of Florida State University, London campus. This story was sent in by her daughter Eleanor A. McCain, M.D., of Shalimar, Florida.
Back to Top 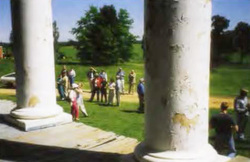 At 8:00 AM, on Saturday, May 1, approximately 150 people from around the South gathered at the Old State Bank in Decatur to ramble through the central Tennessee Valley. This special department entry chronicles the highlights of that day's ramble. 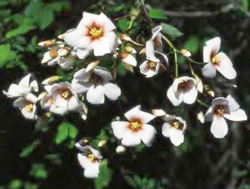 The tung tree, Aleurites fordii, was imported to Alabama from China in the hopes of producing a tung oil industry in the United States. These hopes never came to fruition, but the tung tree has now become part of the Alabama landscape, popping up along field edges and in fence rows as a reminder of a crop that was.