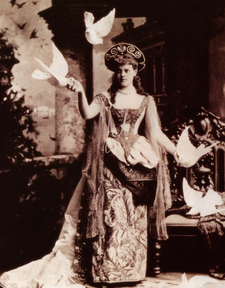 Alva Vanderbilt dressed as a Venetian princess for the contume ball she and Willie K. gave on March 26, 1883. A housewarming for the Fifth Avenue mansion, the ball also marked the entrance of the Vanderbilts into the highest ranks of New York society. (Courtesy New York Historical Society)
Alabama’s “Bengal Tiger”: Alva Smith Vanderbilt Belmont

Mrs. Alva Smith Vanderbilt Belmont was a force to be reckoned with. John Sledge traces the life of the ferocious woman from her early childhood in Mobile to her high society life in New York. Her final days were spent lobbying for women’s suffrage, which she lived to see in 1920 with the adoption of the 19th Amendment. Through two marriages and travels around the world, Alva lived her life to the fullest.

Fiercely determined, Alva thought little of the feelings of those around her. She once proclaimed, “I always do everything first…I blaze the trail for the rest to walk in.” Leaving behind several architectural masterpieces, including the famed Marble House in Newport, as well as the legacy of her life, Alva is not an Alabamian to be forgotten.

Additional Information:The following articles in the Encyclopedia of Alabama will also be of interest:
About the Author
John Sledge is an architectural historian with the Mobile Historic Development Commission and president of the Historic Mobile Preservation Society. He has previously published articles on Magnolia Cemetery and Mobile's decorative ironwork in Alabama Heritage. Sledge holds a master's degree in historic preservation from Middle Tennessee State University.
Back to Top 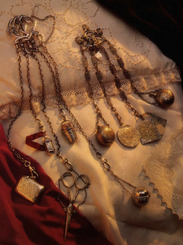 These elegant English chatelaines, though ornately designed, would have been considered everyday jewelry because of their utility. The sterling silver chatelaine on the left contains (from left to right) a match safe, tape measure, scissors, thimble, and pill case. The second chatelaine, c. 1880, holds a compact, pinwheel, notepad with ivory leaves, and a scent bottle. (Photograph by Randal Crow, Birmingham)
Chatelaines

Up until the twentieth century, chatelaines were an important part of women’s fashion. The word chatelaine means “lady of the castle,” but the word also became associated with the object that the lady of the house hooked over her belt. From these objects dangled multiple chains attached to keys and other items necessary for managing her household. Southern women would have been familiar with chatelaines in the nineteenth century. Domestic manuals of the day advised women to lock away their valuables to prevent petty thievery by servants, so there were always a number of small keys to manage.

However, with the advent of short skirts and numerous variations of handbags that could hold more, the chatelaine gradually disappeared. Bits and pieces of them can be found at antique markets, but rarely does one find an intact chatelaine. Although few modern examples remain, the word lives on; Hilary Rodham Clinton was once referred to as the chatelaine of the White House.
Buy This Feature
Additional Information:

About the Author
A native of North Carolina, Marion Ruth Yount Sams is a graduate of the University of North Carolina at Chapel Hill. She now lives in Birmingham and Pell City. Interested in antiques and historic preservation, Sams has attended annual seminars at Delaware's Winterthur Museum for the past decade. She is on the Board of Directors of the Alabama Preservation Alliance and is a past president of the Antiquarian Society of Birmingham, Inc. Sams' article on sentimental and memorial jewelry appeared in Alabama Heritage No. 38.
Back to Top 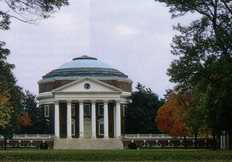 Like the rotunda at the University of Alabama, Virginia's rotunda also burned, but not until 1895. The second rotunda, begin in 1896, diverged somewhat from Jefferson's and was restored to its original configuration in 1974. (Photograph by Robert Llewellyn, Virginia)
Jefferson’s “Academical Village”

Although there are no direct links between Jefferson and the Alabama governor at that time, Israel Pickens, Jefferson’s Virginia certainly inspired at least some of the architecture on the University of Alabama campus. Hughes discusses several possible theories that support the relationship between Jefferson and Alabama. Although the mystery has never been solved, Jefferson’s academical village clearly had a profound impact on the University of Alabama architects.

Additional Information
The following articles in the Encyclopedia of Alabama will also be of interest:Multimedia:
About the Author
Native Alabamian Delos Hughes, emeritus professor of politics at Washington and Lee University, holds a bachelor's degree from Oberlin College, and master's and doctoral degrees from the University of North Carolina at Chapel Hill. He lives in Lexington, Virginia.
Back to Top 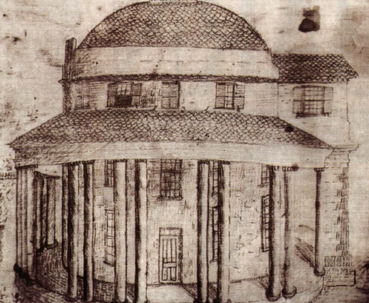 This is a sketch of the University of Alabama rotunda, drawn by an antebellum student. It reveals a side view of the building not seen in other sketches of the structure. (Courtesy William Stanley Hoole Special Collections Library, University of Alabama)
The Alabama Rotunda

The University of Alabama campus originally featured a dominating rotunda, grandly situated in the center of the mall, or quadrangle as we know it today. A prominent campus landmark, it was modeled after the Pantheon in ancient Rome, and inspired by the Renaissance engravings of Andrea Palladio.

Unfortunately, Alabama’s campus burned to the ground during the final days of the Civil War, leaving nothing but debris. For over a century, the only evidence of the rotunda’s existence lay in one lone photograph and a few sketches. Then in 1984, workers laying computer cables stumbled upon the foundation of the Rotunda buried only inches below the surface. Today the foundation is preserved and serves as reminder of what was once the heart of a campus.
Buy This Feature
Additional Information
The following items in the Encyclopedia of Alabama will also be of interest:
About the Author
Robert Mellown, an art history professor at the University of Alabama and a member of the Heritage Commission of Tuscaloosa County, is a frequent contributor to Alabama Heritage. In 1995 Mellown received a Distinguished Service Award from the Alabama Historical Commission for his restoration work on Tuscaloosa's Marmaduke Williams House, a site on the statewide 1994 Endangered Historic Places listing.
Back to Top
Barn Again!

The Alabama countryside is dotted with dilapidated structures that were once the heart of rural life. Epicenters of Alabama agriculture, the barns have evolved over the years and adapted to different uses. Harvey Jackson III explores the origins of the Alabama barn and the types of barns found in rural Alabama. Tragically, these rustic icons are disappearing at an alarming rate. Farm buildings are a vital part of Alabama’s heritage, and preserving their legacy is important in remembering the state’s past.

About the Author
Harvey Jackson is professor and head of the department of history, Jacksonville State University. He is serving as Core Scholar for the "Barn Again!" exhibit being sponsored by the Alabama Humanities Foundation and the Smithsonian Institution.
Back to Top

The Nature Journal
Muscadines and Scuppernongs

Muscadines are closely identified with the South, serving as both foodstuff and cultural icon. Their natural distribution embraces Dixie, from Virginia to central Florida, along the Gulf of Mexico to eastern Texas, up the Mississippi River to Missouri and the Appalachians. L.J. Davenport examines the history and uses of the muscadine.

Additional Information
The following items in the Encyclopedia of Alabama will also be of interest:
About the Author
Larry Davenport is a professor of biology at Samford University, Birmingham.
Back to Top