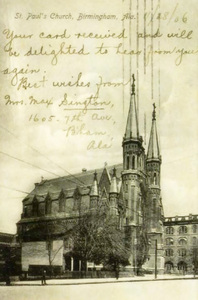 Around the turn of the century, if one wanted to dash off a quick note to a friend, the fashionable thing to do was to send a picture postcard. But the invention of the picture postcard not only brought about a convenient, inexpensive way to communicate by mail—it also helped to preserve history. James L. Baggett, Birmingham Public Library archivist, discusses how postcards have become a form of historical documentation as well as a collectible. Photographs of picture postcards depicting Birmingham at the turn of the century accompany the article. Other sources for information on postcards can be found on the "Postcard Resources Page" (See our Alabama Links Page). provides links to nearly two hundred websites for clubs, dealers, auctions, collectors, and postcard exhibits. Alabamians may be especially interested in "Historic Postcards of Alabama: A Portion of the Sturdivant Hall Collection."

Several of the better sources for information on postcards can be found on the Internet. Alabama Herirage readers may be especially interested in "Historic Postcards of Alabama: A Portion of the Sturdivant Hall Collection"

The following article in the Encyclopedia of Alabama will also be of interest:Multimedia:

A number of people assisted in the preparation of this article, including Steven Gilmer, Don Veasey, Virginia Pounds Brown, Sam Rumore, Louise Tommie, and Caryl Johnston.
Back to Top 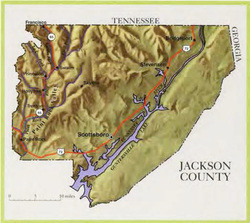 Separated from the hustle and bustle of large Alabama cities, in the northeastern part of the state lies Paint Rock Valley in Jackson County. In the early 1800s, pioneers were drawn to this "little sister to Virginia’s Shenandoah," with the numbers increasing after 1819, the year in which the Cherokees were forced to cede most of their lands to the U.S. government. Author John Scott describes the history and development of Paint Rock Valley and the people who inhabited the area, from the early years through the Civil War, the coming of the Tennessee Valley Authority, and World War II, up to the issues faced by the area today. Evocative photographs by Anderson Scott of the valley’s mountains and streams accompany the article.

Buy This Feature
Additional Information
The following article in the Encyclopedia of Alabama will also be of interest:
Multimedia:

About the Author
Since retiring from active practice with the law firm of Capell , Howard, Knabe & Cobbs, Montgomery native John Scott has been writing on Alabama's history and countryside. A frequent contributor to Alabama Heritage, Scott has written articles on the old Clay County resort, Clairmont Springs, and the five Crommelin brothers of Wetumpka, the most decorated family in the history of the U.S. Navy.

In producing this article, John Scott has collaborated with his nephew Anderson Scott, a photographer. Anderson's photographs also appeared in the Clairmont Springs article (AH No. 42) and in his study of rural churches (AH No. 43). When he's not taking pictures of Alabama, Anderson Scott practices law in Atlanta. He holds an undergraduate degree from Davidson College, a master's degree in art from Yale University, and a J.D. degree from Emory University.

Both Scotts wish to thank the gracious people of Jackson County who provided information and insights for this article, especially Mrs. Maxine Vandiver of the Paint Rock Valley Historical Preservation Group, and Dr. David Campbell of Northeast Alabama State Community College, whose excellent 1989 article on the valley is listed in "Additional Information."
Back to Top 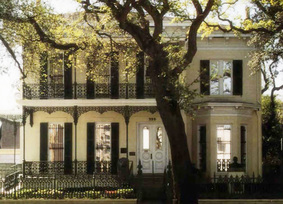 In 1835, a young builder from Long Island, New York, newly widowed, landed in Mobile, Alabama, with his five-year-old son, hoping to make a new start. The builder, James Flandin Hutchisson, not only secured for himself a better future but began a line of architect descendants who would follow in his footsteps, with four generations of Hutchissons building more than twelve hundred of Mobile's structures. Architectural historian John Sledge tells the story of this remarkable family and their rise to become extraordinary and prolific architects who literally helped build the port city of Mobile. While fewer than two hundred of the Hutchisson structures remain standing today, the family built almost every type of structure the booming Southern town needed, including schools, churches, stores, warehouses, and homes.

Additional Information
The following article in the Encyclopedia of Alabama will also be of interest:
About the Author
John S. Sledge is an architectural historian with the Mobile Historic Development Commission and book editor for the Mobile Register. He holds a master's degree in historic preservation from Middle Tennessee State University. Though raised in central Alabama, Sledge has deep roots on the Gulf Coast. His father grew up in Mobile's Georgia Cottage, formerly the home of Augusta Evans Wilson, and his mother lived in the Pontabla Building in New Orleans. He has written and lectured widely on Mobile's history and architecture. "The story of the Hutchisson family is a remarkable one," he says, "without parallel in the South." 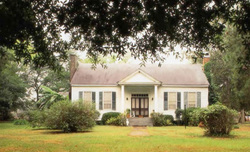 Little is known of the painter Adrian Thompson. His presentations of antebellum Alabama and Alabamians were often ensnared by the conventional, but when he was at his best, Ardian Thompson was a better painter than any of his Alabama contemporaries.

About the Author
Edward Pattillo, formerly Curator of the Alabama Judicial Department, is an antiques and fine arts consultant and appraiser in Montgomery. He wishes to acknowledge the scholarship of Laquita Thomson and Bryding Adams in the preparation of this article.
Back to Top

Called the rusty-backed, scaly, or pine lizard in many parts of Alabama, the fence lizard is conspicuous both due to its size (4-7 inches long at adulthood) and tendency to bask in exposed places. L.J. Davenport discusses the mating rituals of the fence lizard.

Additional Information
The following articles in the Encyclopedia of Alabama will also be of interest:
About the Author
Larry Davenport is a professor of biology at Samford University.
Back to Top
Recollections
Hog Killin'

After his retirement at age seventy, C.W. Ford wrote a series of articles about events that had happened during his childhood on the plantation. Ford died in Montgomery in 1990 at the age of ninety-seven. This sample of his work was sent in by his daughter, Anne F. Merlini of Montgomery. It recounts his childhood memories of watching hog killings--the butchering and the processing of the meat. together with his delight in getting to feast on such savory delicacies as sausage and chitlins.

About the Author
C. W. Ford was born in 1893 on a plantation outside of Marion, Alabama, in Perry County. He attended Marion Institute, class of 1911, but contracted a severe case of measles which prevented him from  completing his schooling. In 1912 Ford was on call twenty-four hours a day at Sprott's Store in Sprott, Alabama, as a clerk and telephone operator. In 1913 he went to work for the Railway Mail Service and in 1920 was transferred to Montgomery.
Back to Top