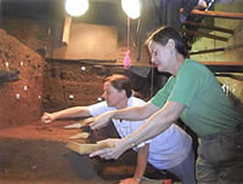 By Boyce Driskell with Baker Lawley

In 1988, a group of archaeologists were sent to investigate a small, unimpressive cave nestled in northern Alabama, which had the potential for archaeological deposits. Initial tests of the soil appeared to yield nothing—until the archaeologists heard the distinct sound of flint hitting the trowel. Our understanding of the earliest inhabitants of Alabama and America has not been the same since. With Baker Lawley, Boyce Driskell explains the archaeological importance of Dust Cave in the Summer 2002 issue of Alabama Heritage. The deposits in the cave have had a dramatic effect on our understanding of the people of the Pleistocene and early Holocene eras, Driskell explains. In addition, the site serves to train future archaeologists through the Dust Cave Field School, a program that runs each summer. The lessons and technology of the dig are explained, as well as the new theories generated by the research at Dust Cave. For an inside look at both the work of archaeology and the lives of some of Alabama's earliest inhabitants, this article is a must.

Additional Information
The following items in the Encyclopedia of Alabama will also be of interest:
About the Authors
Boyce N. Driskell received a Ph.D. from the University of Kentucky in 1984. Until recently, he served as Senior Archaeologist for the Office of Archaeological Services of the University of Alabama Museums. His technical specialties include lithic technology and microscopic usewear analysis of chipped stone tools. His current research concerns the
early aboriginal colonization and cultural adaptation in the middle Tennessee Valley with on-going excavations at Dust Cave and at the Beartail Mountain Bluffshelter near Huntsville, Alabama. 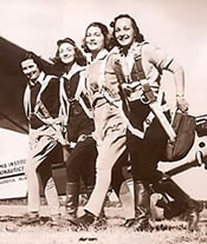 Working outdoors in below-zero temperatures, being exposed to frostbite at high altitudes, and making emergency mechanical repairs is definitely above and beyond the call of duty—even for a pilot. But that is exactly what Nancy Batson and her female comrades of the Women's Auxiliary Ferrying Squadron (WAFS) repeatedly accomplished. During World War II, Birmingham native Nancy Batson was one of the first recruits to the WAFS, a civilian unit, active from 1942-1944, that utilized the skills of women pilots. Later known as the Women's Airforce Service Pilots (WASPs), this prestigious female flying force earned a reputation for excellence and significantly advanced the United States' war effort by serving their country in flight. In the Summer 2002 issue of Alabama Heritage, Sarah Byrn Rickman details the often harrowing, but truly heroic, experiences of Nancy Batson in her career in the WASPs.

About the Author
Sarah Byrn Rickman is a former journalist who has also written and done some television work for the International Women's Air and Space Museum of Cleveland, Ohio. Through year of extensive research, access to diaries, letters and personal papers, as well as interviews with those WAFS still living, Rickman pieced together the stories of all the original WAFS in her book, The Originals: The Women's Auxiliary Ferrying Squadron of World War II. Her actual aviation experience is twenty-two hours in a Cessna 152.

She and husband Richard live in Centerville, Ohio and have two grown sons. The author wishes to express thanks to the family of Nancy Batson Crews for their help and support; to the Southern Museum of Flight in Birmingham; the WASP/WAFS Archives at the library at Texas Woman's University, Denton, Texas; the International Women's Air and Space Museum in Cleveland, Ohio; the many WAFS family members who have contributed greatly to this overall story; and to the eight surviving "Originals." 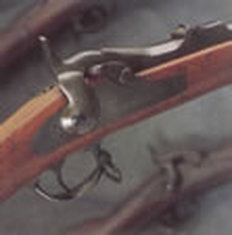 A Springfield rifled musket
(Alabama Department of
Archives and History;
photograph by Robert Fouts)
"Three Cheers and a Tiger for the Lomax Rifles!"

They marched in, executed commands, performed platoon movements and even fired blank cartridges before coming to parade rest in front of the judges. And when it was over, the Lomax Rifles of Mobile, Alabama, had won the National Drill and Encampment Competition of 1887, in the most talked-about militia drill competition the country had ever seen. Militia companies were popular in the twenty-five years following the Civil War as a way of demonstrating regional patriotism, and in the Summer 2002 issue of Alabama Heritage, Roger Cunningham writes about the history of these competitions, including the notorious 1887 National Drill. That year, black militia units were allowed to compete for the first time, causing a nationwide stir in newspaper coverage of the event when several white militia units refused to compete with the black units. The main focus was the drill competition itself, however, in which the Lomax Rifles did compete—and won first place over their bitter rival, the Toledo Cadets. Hailed as heroes upon their return to Alabama and the South, the Lomax Rifles and their win at the National Drill of 1887 became part of a great story within the history of militia drill competitions.

About the Author
Roger D. Cunningham is a retired army officer who lives in northern Virginia. He is a graduate of the United States Military Academy and has a master's degree in history from the University of Texas in San Antonio. He writes military history articles in his spare time. Most of his current research is in the field of black participation in the militia prior to WWI. He wrote his master's thesis on the black units that served in the Texas Volunteer Guard (1875-1905) and has been studying the topic, on and off, for almost twenty-five years. 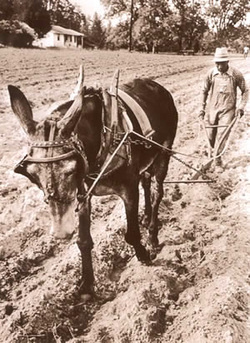 By Judge John B. Scott
With a preface by Kathryn Tucker Windham

From the ancient Assyrians to the Roman Empire and to America's first mule breeder, George Washington, the mule has been a vital aspect of virtually every civilized society. Judge John B. Scott (1906-1978), in an article written in December 1967 and recently discovered at the state archives, writes a touching epitaph to the mule, which Alabama Heritage proudly publishes in the Summer 2002 issue. "The mule is a happy blending of the ass and the horse, and possesses the finer qualities of each," writes Judge Scott, explaining the parentage and personality of the mule, while also tracing its use throughout history. A tribute to the mule ends the article, as the mule's importance in society waned. "I am glad," Scott writes, "to be able to appreciate, to some degree, the part that the mule has played so well in the history of man." This homage to the much-maligned, taken-for-granted animal illuminates a deep appreciation for the hardworking mule.

About the Authors
Judge John Baytop Scott (1906-1978) was a lifelong resident of Montgomery County. He served as "city judge" for thirty-five years with the Municipal Court of the City of Montgomery. Along with his duties on the bench, Judge Scott served from 1950 to 1969 as Executive Secretary of the Alabama State Bar Association, and ended his working years as Reporter of Decisions for the Appellate Courts of Alabama. He and his wife, Ellie, had two sons, John (a frequent and valued contributor to AH) and Jim. Although deeply involved in the political and civic life of the city, Judge Scott's happiest hours were spent hunting, fishing, and playing poker-all arts at which he excelled.

Kathryn Tucker Windham is one of Alabama's best known storytellers. After graduating from Huntingdon College, Windham became the first woman hired by the Alabama Journal in Montgomery. In her distinguished career as a journalist, she held several posts with the Birmingham News and the Selma Times Journal. Now, in her second career as a storyteller and author, Windham has published several books and is a fixture at numerous storytelling festivals in the United States and abroad. Her ghost stories, which she first collected in Thirteen Alabama Ghosts and Jeffrey, have been favorites for generations of schoolchildren. She has been featured on National Public Radio's All Things Considered, and her commentaries are still heard every Friday morning on Alabama Public Radio.
Back to Top 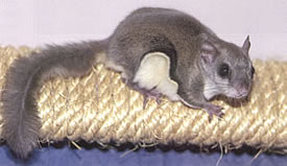 Perhaps most people only encounter the flying squirrel through The Adventures of Rocky and Bullwinkle, but the creature in its non-animated version is equally entertaining. Elusive and nocturnal, the flying squirrel seldom appears, holing up in abandoned woodpecker holes during the day. Their need for nesting and denning sites, however, often brings them into closer contact with humans than is comfortable for either side of the exchange.

About the Author
Larry Davenport is a professor of biology at Samford University, Birmingham, Alabama.
Back to Top
Southern Architecture and Preservation
"Gaineswood Gets a Lift"

Gaineswood is one of the most elaborate Black Belt plantations homes. Purchased by the State of Alabama in 1966, the site functioned as a museum for many years, though as time passed more damage accrued to the structure. This entry chronicles the ongoing efforts to restore and maintain Gaineswood.


Additional Information
The following article in the Encyclopedia of Alabama will also be of interest:Multimedia: