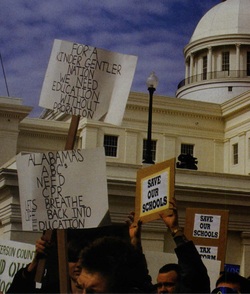 On February 4, 1992, several thousand Alabamians--members of parent-teacher associations and other concerned citizens--marched to the Alabama statehouse in Montgomery to voice support for tax reform and increased funding for education. (Courtesy George Wolfe)
Taxes, Taxes, Taxes: The History of a Problem

By Wayne Flynt and Keith Ward

Alabamians hate taxes. When given the option between raising taxes and cutting social services, the choice seems simple: cut the services. This fact is not new; it is inextricably bound up in the history of the state. In this article, Wayne Flynt and Keith Ward examine the history of Alabama's attitude toward taxation and offer suggestions for tax reform.

About the Authors
Wayne Flynt, University Professor, Auburn University, is the author of seven books, most of them dealing with Alabama, its economic development and persistent poverty. His most recent book, Poor But Proud: Alabama's Poor Whites, was nominated for the Pulitzer Prize, won the 1990 Lillian Smith Prize for Non-Fiction (Southern Regional Council), the Alabama Library Association Award for Non-Fiction, the Jame F. Sulzby, Jr. Prize for best book on Alabama (Alabama Historical Association), and was selected Outstanding Academic Book for 1990-1991 by Choice, a publication of the American Library Association.

Keith Ward, Director, Center for Governmental Services, Auburn University, is one of Alabama's leading tax authorities. He has served with tax reform groups established by the governor, the speaker of the house, the State Department of Education, and the Torbert Commission. Ward recently received the Auburn University Extension Award for Excellence for his outreach efforts. His written and oral pronouncements on equitable tax structure can be expected to become the basis for future tax change.
Back to Top 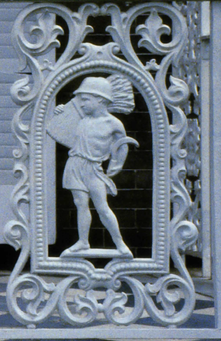 Flamboyant, yet practical, cast iron captured the imagination of America. The infinite variety of forms possible in cast iron made it desirable for architects seeking to add dramatic flair to their buildings. In no area of the country was it more appreciated than in coastal cities such as Mobile, Alabama. The history of the metal, however, is by no means straightforward: at once prized and neglected, imitated and sold for scrap, cast iron weathered the twentieth century to become an integral part of Mobile.

About the Author
John Sledge, architectural historian for the Mobile Historic Development Commission, has a master's degree in historic preservation from Middle Tennessee State University. His interest in cast iron is long-standing: A a child he enjoyed playing on the iron hitching post in front of his grandmother's antebellum home in Mobile. "This article will have succeeded," he says, "if it evokes an appreciation for old downtown Mobile, now fallen on such hard times."
Back to Top

The Right Reverend Nicholas Hamner Cobbs, first Episcopal bishop of Alabama, prayed that he would die before Alabama,a seceded from the Union. He passed away on January 11, 1861, an hour before the event occurred. (Courtesy Alabama State Department of Archives and History)
Praying for the President

Church and State collided during Reconstruction when Alabama's Episcopalians refused to pray for the US president. Though such prayer was common in the era before the Civil War, representatives of the Episcopal church argued that it was their right to refuse prayer for the president, arguing that--since he was the head of an occupying force--his rule was illegitimate. In response, the Union army issued General Orders 38, which threatened military closure of the churches until such a time as their leaders agreed to re-institute the prayer. The confrontation between these two stances was intense and would result in an appeal to the subject of the prayer himself--Pres. Andrew Johnson.

Cheshire, Joseph Blount. The Church in the Confederate States (Longmans, Green, and Co., 1914).

About the Author
Janie Moore, a native Alabamian, holds master's degrees in English and social work from the University of Alabama. She has long been interested in the history of the Episcopal church. Moore and the editors wish to thank the Reverend Emmet Gribbin of Tuscaloosa, Jim Wood of Mobile, and Pat Cather of Birmingham, for assistance with the article.
Back to Top


While the Classical and Greek Revival styles were the most popular choices for plantation owners, romantic architectural styles such as the Italianate and the Gothic Revival gained increasing favor in the 1850s. Two examples of the Gothic Revival style are found in the Canebrake region of Alabama. Jeff Mansell discusses the history and influence of these houses.

About the Author
Jeff Mansell is assistant director, Cahaba Trace Commission.
Back to Top