William McIntosh was born around 1778, the son of a Savannah Tory and a full-blooded Creek woman. Over the course of his life, McIntosh gained fame as a diplomat and a warrior, but increasingly he became caught in crosscurrents between the white and Indian worlds. His genius for American entrepreneurship made him a prominent figure in both worlds, precisely the exalted position from which tragic heroes fall. This is his story.

About the Author
Benjamin W. Griffith, Jr., emeritus professor of English and dean of the Graduate School, West Georgia College, was formerly Pollock Professor of English and chairman of the department, 1955-70, at Mercer University. The author of
more than sixty articles on American and English literature, Griffith has also published ten textbooks used in English courses, including works on the writings of John Dryden, John Gay, Mark Twain, Emily Bronte, and George Elliot; three books on grammar and writing; and a dictionary of literary and grammatical terms.

His most recent book, Mcintosh and Weatherford, Creek Indian Leaders, is a study of Indian-white relations on the frontier in the period from the Revolutionary War to the Indians' removal to the West in the 1830s. It is available from The University of Alabama Press, P.O. Box 870380, Tuscaloosa, Alabama 35487-0380.
Back to Top 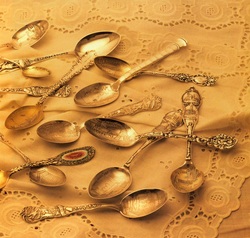 Birmingham spoons depicting ore mines, furnaces, Vulcan, City Hall, and various other buildings and scenes of importance to Birmingham residents at the tum of the century.
Souvenir Spoons from Alabama

In 1891 a new fad swept the nation: spoons. With the Gilded Age firmly underway, more Americans than ever were traveling, and these tourists wanted souvenirs to take home with them. Spoons, inexpensive and portable, engraved with the name of the city and featuring some ornamental design, were a popular option. Still recovering from the Civil War, Alabama had few tourist sites during this period, and so produced relatively few spoons. And yet, these souvenirs of Alabama do exist--spread across the United States by visitors, hidden in tiny shops and antique stores throughout the country. This article examines the history of the collectible spoon.
Buy this Feature
Additional Information

About the Author
Nancy Rohr, a native of West Virginia and a former school teacher, has lived in Huntsville since 1968. She became
interested in spoon collecting some twenty years ago when her mother gave her several spoons that had been in the
family for years. "I was fascinated by the history they represented," she says. "So many of the buildings depicted in these spoons have been torn down. In some cases, all we have left of these structures are their engravings in spoons." Rohr's collection now includes a wide variety of spoons-children's spoons, medicine spoons, English spoons, American coin spoons, and one of her favorites, Alabama spoons. "These are particularly exciting to find," she says, ''because so few of them were made." According to Rohr, collectors may share their delight with other "spooners" by joining the American Spoon Collectors Society in care of Bill Boyd, 4922 State Line Street, Westwood Hills, Kansas 66205.
Back to Top 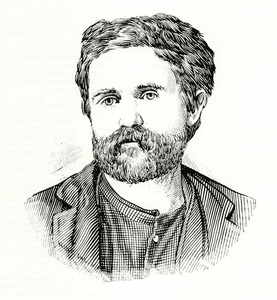 The train robber Rube Burrow (1854-1890) was Alabama's most notorious outlaw and one of the South's most wanted men until he was shot dead on the streets of Linden, Alabama. (Engraving from "Rube Burrow, King of the Outlaws, and His Band of Train Robbers," by G. W. Agee.)
Rube Burrow, Outlaw

The train robber Rube Burrow (1854-1890) was Alabama's most notorious outlaw and one of the South's most wanted men until he was shot dead on the streets of Linden, Alabama. His is a story of pistols and Pinkertons, of violence and vengeance. His career was steeped in blood, and his death--in an unexpected place and from an unexpected quarter--was covered in irony. This is his story, the tale of an outlaw who never repented and of the bullet he never saw coming.
Buy this Feature
Additional Information
Dime Novels on Rube Burrow:

About the Author
Warren Rogers, a native Alabamian, is an instructor in history at the University of Alabama. He earned his bachelor's degree at Florida State University and his master's and doctorate in history at Auburn University. While a student at Auburn, Rogers became interested in Rube Burrow and developed the subject into his master's thesis; he is currently expanding his thesis into a full-length book.
Back to Top