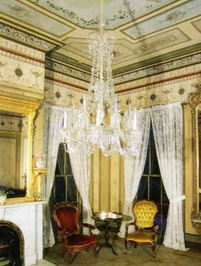 By Elizabeth Via Brown

Since purchasing Eufaula’s Fendall Hall in 1973, the Alabama Historical Commission has been working to restore the fine Italianate mansion constructed over a century ago. One of the final steps is the restoration of the hand-painted murals and stencils in the hallway, parlor, and dining room. The article relates the history of the house and details the work being done by professional conservators to bring the distinctive murals back to life. Constructed 1859-60, Fendall Hall is located on a hill above the Chattahoochee River and is now operated by the Historical Commission as a house museum.

Buy This Feature
Additional Information
The following articles in the Encyclopedia of Alabama will also be of interest:
About the Author
Elizabeth Via Brown social columnist for the Montgomery Advertiser (and the former homes and gardens editor), is a freelance writer living in Montgomery. Interested in genealogy, Brown collects information about her mother's ancestors, the Hunters, Merrills, and McRaes, who migrated from Vermont to South Carolina and settled in Eufaula in the early 1800s. Currently, she is helping restore a small family cemetery in Barbour County.

The author and the editors wish to thank the following for their assistance with this article: Charles M. Crook, Montgomery, a greatgrandson of the Dents; Elizabeth Barker, curator of Fendall Hall; Jack Stell, formerly of the Alabama Historical Commission, and Robert Gamble, senior architectural historian, Alabama Historical Commission.
Back to Top 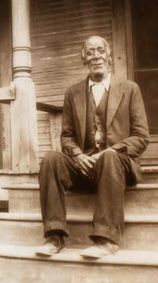 In the late 1930s, the federal Work Projects Administration launched an ambitious plan: to document slavery by interviewing the people who had experienced it. Although many of the former slaves were in their seventies and eighties, they had vivid memories of life under the "peculiar institution." In the interviews, the ex-slaves give vivid descriptions of life under slavery, some tragic and some humorous. Their accounts, a number of which are quoted in Alabama Heritage, cover daily life, work, health, separations from family and friends, the Civil War, and emancipation. Individually and as a group, the interviews provide an in-depth picture of the varied experiences of those who endured and survived slavery.

For more information about the WPA slave-narrative project, see:
The following articles in the Encyclopedia of Alabama will also be of interest:
Multimedia:

About the Author
Kathie Farnell, who holds a BA. in English from the University of Montevallo and a law degree from the University of Alabama School of Law, is president and founder of Artemis Media Project, an Alabama-based nonprofit organization which develops and produces humanities-based radio and television documentaries. She was co-producer and project director of the radio documentary series Remembering Slavery, produced for national distribution by Public Radio International in fall 1998.

The Mobile Press Register building in the 1940s
(Erik Overbey Collection,
University of South Alabama Archives)
Mobile’s Own Ozymandias: Ralph B. Chandler and His Newspapers

In 1929 an Ohio native named Ralph Chandler launched the biggest newspaper battle Mobile had ever seen. With the backing of some of the most powerful men in the state, this feisty upstart challenged the venerable Mobile News-Item and its morning edition, the Register. From 1929 to 1932, the Mobile Press, Chandler’s paper, and F. I. Thompson’s Register battled for readers, turf, advertisers, and the moral high ground. When the dust settled, Chandler had won, and the new combined paper, the MobilePress Register, reigned supreme until the Press’ demise in January 1997. Author Judith Sheppard, a journalism professor at Auburn University, relates Chandler’s exciting story. She also examines why, less than thirty years after his death and despite the establishment of a charitable foundation that bears his name and assists numerous Mobile causes, Chandler is not remembered by most Mobilians.

Additional Information
Little direct information on Chandler is available, but for a broad view of the history of the Mobile papers, see Ralph E. Poore, Jr.'s manuscript "Alabama's Enterprising Newspaper: The Mobile Press Register and Its Forebears, 1913-1991," available in the Mobile city archives.

The following articles in the Encyclopedia of Alabama will also be of interest:Multimedia:
About the Author
Judy Sheppard, who grew up reading the Mobile newspapers in Semmes, Alabama, is an associate professor of journalism at Auburn University. She also writes frequently for the American Journalism Review and for newspapers in this region, including the Mobile Register, the Atlanta Journal-Constitution, the Phenix Citizen in Phenix City, and the Randolph Leader in Roanoke.

She has won a number of state press association awards in Alabama and Georgia and the Society of Professional journalists' Green Eyeshade Award for media criticism in the Southeast. A seven-year veteran of daily and weekly newspapers, she holds a master's in English literature from Auburn University. 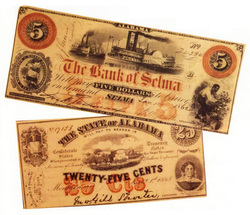 Before the standardization of currency around the turn of the century, not just the federal government but states, banks, railroads, small businesses, and even private individuals issued a wide variety of paper money. Between 1790 and 1865, more varieties of paper money circulated within the country than at any other time in the nation’s history, and Alabama was no exception. In this article, currency specialist Guy Swanson describes the history and development of paper money in Alabama. According to Swanson, "The study of currency used or produced in Alabama during the nineteenth century reveals much about the state’s political, social, and economic development."

About the Author
Guy Swanson received his BA. from Michigan State University and his MA. and M.L.S. from the University of Alabama. He has been studying Confederate and Southern state currency since 1987 and has delivered presentations on the subject to organizations in Tennessee, Texas, Virginia, and the United Kingdom.
Back to Top

Art in the South
The "Precisionism" of Charles Sheeler

In 1938 Philadelphia artist Charles Sheeler accepted an assignment from Fortune magazine to produce what the editors envisioned as a "Power" portfolio--a series of images that would illustrate industrial energy for an upcoming issue of the magazine. The portfolio was almost two years in the making. Although the assignment originally called for eleven paintings, Sheeler produced only six, five of which delt with modern technology.  Two of these paintings dealt with Alabama: one portrayed the instillation of the Unit No. 2 hydroelectric turbine in the dam at Guntersville, while the other depicted the dilapadated but still functioning nineteenth-century mill at Hamilton, Alabama. These two paintings remain powerful evocations of the state's past and its hope for the future in 1939.

Additional Information
The following item in the Encyclopedia of Alabama will also be of interest:
About the Author
Robert Mellown is an associate professor of art history at the University of Alabama.
Back to Top 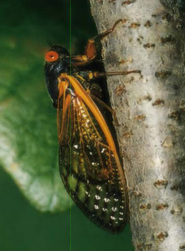 Every thirteen years, near the beginning of May, the woodlands of Alabama waken to an eerie, incessant din. The noise is quickly traced to thousands of two-inch-long creatures that arise overnight, crawling up from deep below the soil surface to perch and sing. And just as suddenly, toward the end of the same month, they completely disappear. They are periodical cicadas, and they are the topic of L.J. Davenport's Winter 1999 entry in the Nature Journal.