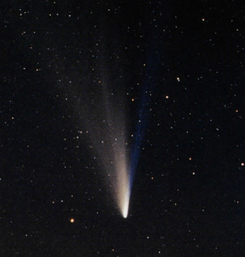 Some sixty-fave million years ago, a massive meteorite smashed into the hard bedrock that underlies what is today Elmore County, Alabama. A similar hit today would level much of Alabama and Georgia. Pictured: Comet West, photographed on March 8, 1976. (Photograph by Dennis diCicco/ Sky & Telescope magazine)
The Wetumpka Astrobleme

The jumbled hills outside Wetumpka, Alabama, hide a secret; they are the eroded remains of a four-mile wide crater formed by a gigantic meteorite. Formed more than sixty million years ago when a massive meteorite smashed into the hard bedrock that underlies present-day Elmore County, the crater eluded explanation for eighty-five years. Its discovery was first recorded in the 1890s by a state geologist named Eugene Allen Smith, but it was not until 1976 that the area was labeled an astrobleme, or “star-wound,” by Tony Neathery and his team. It is a fitting title for an area where rocks of more than two hundred million years difference in age are jumbled together and where concentric rings of fractures and zones of shattered rock can be found beneath the surface. Although the idea that an impact crater formed this unusual area met with initial resistance, today the Wetumpka astrobleme is widely regarded as fact.

For more information about meteorites and the Wetumpka astrobleme, see:The following articles in the Encyclopedia of Alabama will also be of interest:Multimedia:
About the Author
John C. Hall, recently retired from the Museum of Natural History, is still active at the museum as a research associate. A frequent contributor to Alabama Heritage,  Hall has written on Hernando DeSoto, Eugene Allen Smith, and the Hodges meteorite. Currently, he's working on another meteorite story- "the year the stars fell," the great Leonid meteor storm of 1833.

Hall points out that there is no good view of the Wetumpka astrobleme except from the air, but he urges those interested in the subject to obtain a U.S. Geological Survey topographic map (Wetumpka 7.5' quadrangle) and drive around the structure. The most dramatic site, visible from the Highway 14 Coosa River bridge, is the assemblage of upturned rocks which point in the direction of the crater.

Hall and the editors would like to thank Tony Neathery and Gene Byrd for their assistance with this article.


CORRECTION: An incorrect caption ran on page 8. The caption should read: Meteor Crater, Arizona, is 1.2 kilometers in diameter and was produced about 50,000 years ago when an iron meteorite 80-150 feet across hit the earth. The energy released was roughly equivalent to that of a 20-megaton nuclear explosion—a minor disturbance compared to the Wetumpka event. (Courtesy Meteor Crater, Northern Arizona, USA)
Back to Top 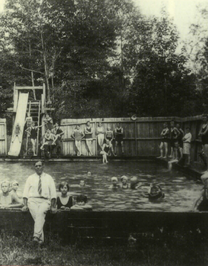 By John B. Scott Jr.

For sixty-five years, Clairmont Springs, a summer resort nestled at the base of the Talladega Mountain, was a byword for old-fashioned hospitality and world-class meals. Designed for “all those who need the healing that soft airs and sunny days, that magical water; and long quiet hours…can bring,” Clairmont was one of Alabama’s best-known summer resorts, made popular by its “healing” mineral springs. George Morgan of Tennessee was the first white settler to establish a farmstead at the site of the springs in 1833. After changing hands several times, the 520 acres around the springs was eventually bought by the Clairmont Springs Company, which built a two-story hotel on the property and sold lots for private cottages. Aided by the railway, the hotel flourished under the ownership of the James William Jackson family. Rates were $2.00 a day, $9.00 a week, or $30.00 a month and included a room, three bounteous meals a day, and access to eleven springs, each with a different mineral composition. When Clairmont Springs closed in 1975, time, weather, and vandalism took their toll. However, the natural beauty of the place remains, and the springs flow as strongly as ever.

About the Author
Montgomery native John Scott, a graduate of the University of Alabama Law School, is a Montgomery attorney with a lifelong love of the Alabama countryside. Active in numerous conservation organizations and civic groups, Scott is also
an award-winning author. His Memories of the Mount: The Story of St. Meigs,, Alabama (Black Belt Press, 1993) received the Alabama Historical Association's C.J. Coley Award in 1994.

Most of the material for Scott's article came from the recollections and personal papers of individuals who had the good fortune to live or spend their summers at Clairmont Springs. The author wishes to thank the Jackson family, in particular, for the stones and photographs which they generously furnished. The color photographs accompanying this article were taken by the author's nephew, Anderson Scott.
Back to Top 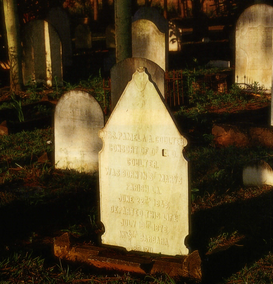 At a remote site near Americana, Brazil, the confederado cemetery and nearby interdenominational Protestant church bear silent witness to the colony of ex-Confederates that thrived here after the Civil War. (Photograph by Cyrus B. Dawsey)
The Confederados: Old South Immigrants in Brazil

By Cyrus B. Dawsey and James M. Dawsey

Distraught by the outcome of the Civil War, many southerners were looking for a new home where they would not have to live subject to the hated Yankees. In the 1860s and 1870s, several thousand southerners packed up their belongings and left the ruin of the post-war South for Brazil. Land there was available for as little as twenty-two cents an acre, and the Brazilian government promised easy citizenship and help with accommodations and transportation. Col. William Norris and his son, Robert, from Spring Hill, Alabama, founded the largest and most successful American colony in Brazil. Attempting to re-create the extensive cotton plantation they had once operated in Alabama, they found success near Santa Bárbara. The Norrises and other American settlers had a dramatic effect on Brazilian society, bringing new farming tools and religious denominations with them. Today the effect of those southern settlers can be seen in their descendents, called confederados, who still speak English and pay homage to their Confederate heritage with annual reunions.

About the Authors
Cyrus B. Dawsey is chairman and professor of geography and codirector of the Institute for Latin American Studies at Auburn University. His brother James M. Dawsey is dean of the faculty at Emory and Henry College. Descendants of Methodist missionaries, the brothers grew up in the interior of the state of São Paulo, where their grandfather, Cyrus, Sr., a Methodist missionary and bishop, had settled in 1914, preaching his first sermon at the Campo church. For several decades the family lived in Americana, and today the Dawseys maintain friendships with many of the confederado descendants.
Back to Top
Places in Peril: Alabama’s Endangered Historical Landmarks for 1996

For the third year, the Alabama Historical Commission and the Alabama Preservation Alliance seek to battle indifference to the value of historic structures by calling attention to some of the state’s most imperiled historic places. This year’s list includes eleven landmarks. Once “the model city of the New South,” the entire city of Anniston is now threatened by unplanned development that has demolished many of the city’s historic sites. Also in danger of disappearing due to poor municipal planning is the historic residential district in Union Springs. St. James C.M.E. Church in Lowndesboro, the original Dallas Academy in Selma, and the Rosenwald schools across the state are all endangered by neglect. Also on the list are two residential sites, WPA architectures in Cheaha State Park, and Pelham Road in Jacksonville.

About the AHC/APA ELC
The third annual listing of places in peril was prepared by a committee of preservationists from the Alabama Historical Commission, a state agency, and the Alabama Preservation Alliance, a private, nonprofit preservation organization. The committee made its selections after reviewing the extensive listings on the Preservation Watch List maintained by the Commission and nominations from the general public.

Robert Gamble and Suzanne Wolfe prepared the text for this article in consultation with the rest of the committee. Ed Hooker prepared the endangered places exhibit scheduled to tour the state for the coming year. To arrange for the exhibit to travel to your area or to nominate a structure for next year's list of Alabama's most endangered historic landmarks, contact the Alabama Historical Commission, 468 S. Perry Street, Montgomery, AL 36130 or call (334) 242-3184.
To read about more places in peril, click here for our Places in Peril blog.
Back to Top

From the Archives
Off to the War: Photographs of Alabama's Confederate Soldiers

More than four hundred images are part of the extensive collection of Confederate photographs housed in the Alabama Department of Archives and History in Montgomery. Currently the photographs are being researched, identified, and made available to the public. This department entry includes photographs of and commentary on many of these images.

Additional Information
The following article in the Encyclopedia of Alabama will also be of interest:
About the Author
Robert Bradley is curator of Special Collections, Department of Archives and History, Montgomery.
Back to Top
The Nature Journal
Bowdarks

Bowdarks are short trees with nondescript leaves. Like other members of the mulberry family, bowdarks produce a juicy latex and a compound fruit, which is quite large. L.J. Davenport examines the history and life-cycle of the bowdark.

About the Author
Larry Davenport is a professor of biology at Samford University.
Back to Top