In the years following the Civil War, Alabama embarked on what some called "the Chinese experiment." For the experiment's most optimistic proponents, the idea was simple and sure: Import inexpensive Chinese workers to redress the dire labor shortages the state was suffering after the Civil War and use Chinese immigrants to rebuild plantations and to construct railroads, thereby resuscitating the state's lifeless post-war economy at the least possible cost. For the most part, the plan did not work. In this article, Daniel Liestman examines the plan, the thinking behind it, and the reasons for its failure.

About the Author
Daniel Liestman, reference librarian and coordinator of bibliographic instruction, the Kilmer Area Library, Rutgers University, holds master's degrees in library science (University of Tennessee) and history (Midwestern State University, Texas). A native of Wisconsin, Liestman spent his undergraduate years in South Dakota, where he became interested in Chinese immigration to the United States. "The Yellow Man in the Black Hills," an article by Liestman on the Chinese in nineteenth-century South Dakota, was published in the Journal of the West in January 1988. From August 1985 to January 1988, Liestman was a reference librarian at the Amelia Gayle Gorgas Library, University of Alabama.
Back to Top 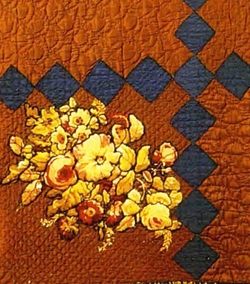 A detail of quilt made prior to 1862 by
Martha Jane Hatter of Greensboro, Alabama.
(Photo courtesy Chip Cooper)
Gunboat Quilts

In mid-February 1862, the Mobile Register and Advertiser published a letter from "A Southern Woman" who wished to appeal to the patriotism of Southern women in general and Alabama women in particular, all of whom, she said, should begin raising money for the cause of the Confederacy. This particular Southern woman had as her goal the creation of a gunboat to defend the City of Mobile. To this end, the woman was willing to contribute "her mite of less than five dollars" which she had "earned by her needle."  Thus began the inspiration for a statewide campaign in Alabama to raise money for what came to be known as the Women's Gunboat Fund.

About the Author
Bryding Henley, curator of decorative arts at the Birmingham Museum of Art, received a bachelor's degree in art history from Hollins College and a master's degree in museum studies from the Cooperstown Graduate Program in New York. A native of Alabama, she returned home eight years ago with plans to undertake a statewide research project designed to locate, identify, and document nineteenth- and early twentieth-century decorative arts in Alabama. That study, the
Alabama Decorative Arts Survey, is now in its third year, and this article represents a small part of the findings of that survey.

Ms. Henley is currently researching the nineteenth-century Alabama folk artist, William Frye. Persons with paintings by Frye and information about his life are asked to contact her at the Birmingham Museum of Art, 2000 Eighth Avenue North, Birmingham, Alabama 35203; (205) 254-2565.
Back to Top 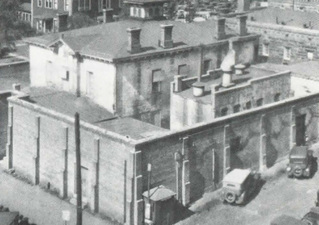 The Jefferson County Jail, known as "The Rock," housed
many of the most dangerous prisoners from Bibb and
surrounding counties until it was razed in 1927. (Courtesy
Birmingham Public Library)
Outlaws, Cat's-Paws, and Spotters


A century ago, crime flourished in the central Alabama backwoods. Thieves made their raids from the rough hill country, afterwards retiring safely among protective family and friends. Their primary object was to seize livestock and cotton, but theft sometimes led to violence. The press followed the exploits of these desperadoes avidly and heaped condemnation on those counties that failed to control them. By the early 1890s, Bibb County bore the heaviest burden of shame. It was known as "Bloody Bibb." And yet, from time to time throughout the last quarter of the nineteenth century, Bibb's neighboring counties were bloody, too. Besides producing criminals of their own, they were havens for others who operated without any respect for county lines. This article recounts the exploits of some of these criminals.

About the Author
Rhoda Coleman Ellison, whose article "Little Italy in Rural Alabama" [Alabama Heritage #2, Fall1986] remains one of the most frequently requested articles Alabama Heritage has published, has again tapped the rich resources of her native Bibb County. For this article on nineteenth-century outlaws, Ellison combed the newspapers of the period and interviewed descendants of many of the people involved. Indeed, Ellison's own life touches her article indirectly. In 1892, when her father came as a young man to practice law in Bibb County, he disembarked at the Randolph train station, where Wiley Trott had shot the Louisiana sheriff a year earlier. Ellison believes her father was present at Trott's
trial the day Trott attempted to cut his own throat with a pen knife.

The author would like to thank the following individuals who provided information for the article: John Glasscock, Jemison; Charles Adams, Tuscaloosa; Melvin Thrasher, Northport; and Marty Everse, Brierfield.
Back to Top 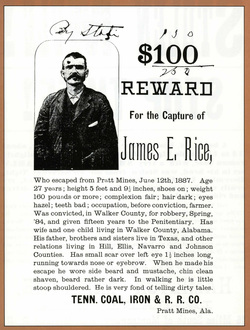 
This photographic section features posters selected from the collections of the William Stanley Hoole Special Collections Library. Written in the days before photography was common, these posters were created by people who had to rely primarily on their descriptive capabilities in order to distinguish the person or animal or object they sought from others of its kind. Apparently they took to their task with relish, describing teeth, scars, skin color, physical deformities, and personality traits with remarkable candor if not total objectivity.
Back to Top