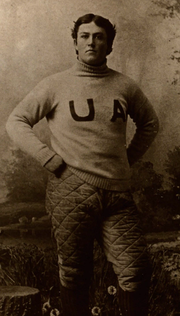 Livingston native William G. Little learned about the new game of football at a prep school in New England and introduced the sport to the University of Alabama in 1892. (Courtesy William Stanley Hoole Special Collections Library, University of Alabama
The 41-Year Time-Out

Auburn University and the University of Alabama both began their football programs in 1892, at a time when the major football powerhouses were still Yale, Harvard, Princeton, and the University of Pennsylvania, and football was still young in the South. The first Alabama-Auburn football game was played on February 22, 1893, in Birmingham, with Auburn winning 32-22. The Alabama-Auburn series continued until 1907, when the competition between the schools came to an abrupt halt.

Wayne Atchenson details the events leading up to the 1908 disagreement as well as several attempts to restart the series in the twentieth century. It was not until 1948, when the state legislature was about to step in, that both university presidents decided it was time to renew athletic competition between the schools. Alabama would win the 1948 game 55-0, but in the end the renewal of the series was everyone’s gain.

This feature includes a sidebar by Atchenson titled "The Other Battle: Athletics versus Academics." 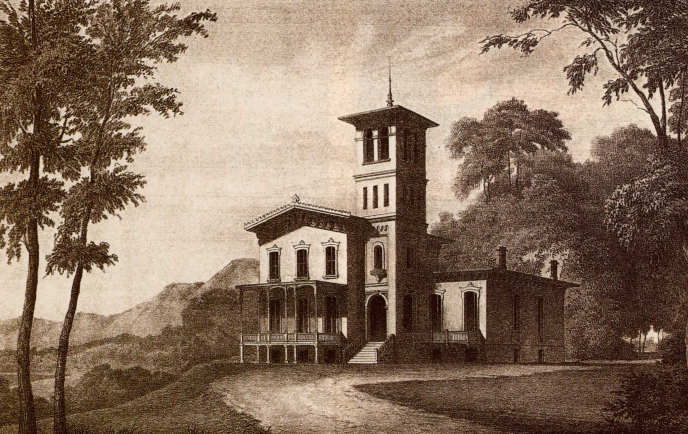 The J.S. Winter residence, Montgomery, was one of the earliest Alabama commissions of Sloan and Stewart. To keep the house dry. Sloan elevated the first floor six feet from the ground and designed doubled walls with tow-inch wide air spaces between them.
The Jemison Mansion and Longwood

Prior to the Civil War, many well-to-do southerners hired northern architects to construct large ornate homes. Two of the most notable mansions built during this time are the Jemison House in Tuscaloosa, Alabama, and Longwood in Natchez, Mississippi. Robert Mellown explores the difficulties incurred by the builders of two of the most distinctive homes in the South. From Union blockades to fearful northern workers, both homes remained largely unfinished until the twentieth century. The stories of construction on the Jemison House and Longwood are as interesting as the homes’ late-antebellum Italianate architecture.

About the Author
Robert Mellown, associate professor of art history, University of Alabama, received his doctorate in art history at the University of North Carolina, Chapel Hill. Mellown has focused his research on antebellum architecture in the Tuscaloosa area and has written extensively on the architectural history of numerous landmarks, including the University of Alabama campus, Bryce Hospital, and the old capitol in Tuscaloosa. Recently he completed an  historic structures report on the Jemison Mansion, funded by a grant from the Alabama Historical Commission. Charter subscribers to the magazine will remember Mellown's article, "Steamboat Travel in Early Alabama," in AH #2
Back to Top
Jemison Mansion Family Histories

Many of the great southern families fell on hard times after the Civil War and never returned to their former wealth. Plagued by outstanding debt, but sometimes owning great physical property, these families found it difficult to recover. The Jemison family of Tuscaloosa faced these hardships as they struggled to overcome obstacles and keep their beloved home in the family.

Camille Maxwell Elebash tells the story of Robert Jemison Jr. and his family from the years of prosperity preceding the Civil War to the Depression-era and the eventual loss of the house to debtors. Currently, the Jemison house is undergoing a massive renovation by its owners, the Tuscaloosa County Preservation Society and the Heritage Commission of Tuscaloosa County, to restore it to its former glory.

Additional Information
The following item in the Encyclopedia of Alabama will also be of interest:

About the Author
Camille Elebash, retired professor of advertising and public relation at the University of Alabama, is a free lance magazine writer. A native of Tuscaloosa, she has long been fascinated by the elegant Italianate mansion on Greensboro Avenue and by the people who have occupied it.

This article could not have been written without the assistance of members of the Jemison family. Of particular help were Patricia Hanson, Robert Jemison's great-great-granddaughter, who transcribed nearly 1,000 of his letters and provided valuable family pictures and information; and Birmingham attorney Asa Rountree, Jemison's great-great-grandson and the last living member of the original family to reside in the house.

The author wishes to express her thanks to these individuals and to Joyce Lamont, Curator of the William Stanley Hoole Special Collections Library, University of Alabama, where the letters of Robert Jemison are housed. Individuals interested in studying the Jemison family may wish to read the letters of A.C. Hargrove and Judge A.S. Van de Graaff, also located at the University of Alabama Special Collections Library.
Back to Top 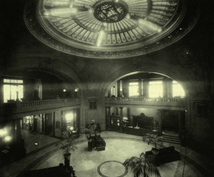 The Battle House Hotel in Mobile, Alabama, is the city’s last grand hotel, which has come to represent the political, social, and cultural life in the city. Currently, the Battle House, built in 1908, is threatened by demolition. Preservationists are now faced with the challenge of raising money and finding a developer who will put the Battle House back into productive use.

Additional Information
The following article in the Encyclopedia of Alabama will also be of interest:
About the Author
Mark C. McDonald is director of the Mobile Historic Development Commission.
Back to Top