Alabama is home to a bewildering variety of aquatic life. Featured here are ten fishes found only in Alabama, some of which have yet to be described. From the Alabama Darter to the Cahaba Shiner and the now-extinct Whiteline Topminnow, this collection of fishes represents Alabama’s unique biological heritage and responsibility to protect its biodiversity. Nature artist Joseph Tomelleri has rendered these fishes in exquisite detail using a combination of photographs, live specimens, and careful notes.

About the Author
Liliana Loofbourow is an Assistant Editor at Alabama Heritage magazine. She has degrees in psychobiology, music, and English and is currently pursuing an M.F.A. in creative writing at the University of Alabama. She thanks Herbert T. Boschung and Joseph Tomelleri for the use of materials from their book, Fishes of Alabama.
Back to Top 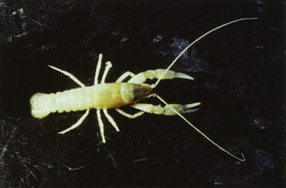 Key Cave in Alabama’s Lauderdale County is the only known home of the blind, albino Alabama Cavefish. Discovered by speleologist John Cooper in 1966, the skittish fish has proved a challenge to researchers, who, in order to collect information, have to navigate Key Cave’s extremely tight quarters and then wait for hours in the hope of catching a specimen for observation purposes. One of the rarest fish in the world, the current estimate of the population size is one hundred individuals.

About the Author
Herbert T. Boschung Jr. has spent more than fifty years studying and teaching about fishes. He is professor emeritus of biology at the University of Alabama and the senior author of the Audubon Society’s Field Guide to North American Fishes, first edition.

Update – April 2006
We thank Dr. Joe Scanlan for the following information on another endangered Alabama fish:

The Stippled Studfish, Fundulus bifax, is found only in clear, sandy-bottomed, upland streams. While historically, F. bifax have been found in Georgia, recent searches have proved fruitless, due to the silting up of streams and developments. The Stippled Studfish will only spawn in clean fine gravel in the aquarium and only after the male and female have cleaned the area by taking up large mouthfuls of gravel and spitting it out many times, possibly because a layer of silt would easily suffocate the eggs in the two weeks it takes them to develop. It has a very limited range in Alabama and its numbers are usually few at any given site. Dr. Scanlan has published an article on the subject in the Sept-Oct. issue of the Journal of American Killifish Association.
Back to Top 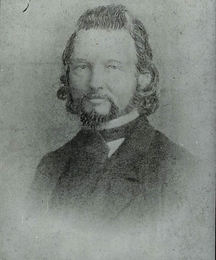 Although both Alabama and Kentucky would like to claim famed horse painter Edward Troye as their own, the artist is hard to pin down. Painting livestock, especially thoroughbred horses, led Troye to travel the eastern and southern United States. As early as 1836, Troye is known to have painted Alabama thoroughbreds. In 1850 he moved his family to Mobile where he taught at Spring Hill College. After a five-year contract at Spring Hill, Troye traveled to the Holy Land with the prominent Kentucky breeder Keene Richards. Afterwards, Troye moved his family to Kentucky. The family eventually moved back to Alabama, and Troye purchased a farm in Madison County. Although Troye died in Kentucky while visiting Keene Richards, his family remained in Madison County, and his descendents continue to live on the land originally purchased by Troye. Paintings by Edward Troye are highly collectible today. He contributed to the Orientalist style and left behind accurate and detailed records of thoroughbreds, landscapes, people, and architecture.

About the Author
Charles Cort lives in South Alabama near Spanish Fort where he works in the apartment development business. His great-great grandfather was from Kentucky and worked at the Oakland Race Track in Louisville. His great grandfather worked for the Louisville Courier-Journal where he wrote many of the early Kentucky Derby race reports. Many people assisted the author in his research, especially James Christian, Judy and Carl Covan, Donna Dunham, Ann Bevins, Carol Shipp, Childs Berry, Collette King, Charles Boyle, Chuck Torrey, and the late Madeline Berry, who was so kind in her conversations with the author.
Charles Cort first became interested in Edward Troye after reading Made in Alabama published in 1995 by the Birmingham Museum of Art. “I saw Edward Troye’s farm was located in Madison County and I really wanted to find where it was” Cort said.“It was right by the post office in Owens Cross Roads. Later that afternoon I found his will. This pretty much hooked me on the saga of Edward Troye.” 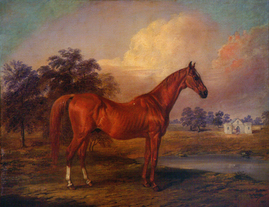 Southern thoroughbreds have captured American sporting interests for generations. At first an informal American event, by the 1800s, horseracing became not only a captive pastime in the South, but a prosperous business as well. Chronicled here are the individuals who at once revolutionized and promoted the sport's modern incarnation, as well as an examination of the thoroughbred bloodlines that carry their legacies.


Buy This Feature
Additional Information
The following items in the Encyclopedia of Alabama will also be of interest:
About the Author
Curtis Parker Flowers is a graduate of the University of Alabama, now retired from teaching history in the public schools of Florence. For further reading on the race horses of North Alabama, Flowers’s new publication Thoroughbred Horses at the Muscle Shoals explores the topic in greater detail and includes nineteenth-century sporting humor pieces written by Thomas Kirkman and originally published in the Spirit of the Times.
Back to Top 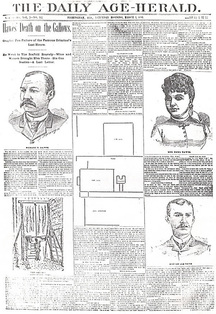 On December 4, 1888, two local teenagers discovered the body of a young girl. Further investigations yielded evidence of a grizzly triple homicide, as Richard Hawes, a Georgia Pacific engineer, became the lead suspect in the killings of his wife and two daughters. The lengthy trial that followed created a swarm of media interest, while also widening social and racial schisms in Birmingham communities. These tensions culminated in a riot, during which numerous citizens were killed by armed militia and law officials.

Buy This Feature
About the Author
Pam Jones is a freelance writer and researcher based in Birmingham. Her particular areas of interest in Alabama history are true crime and the state between the two world wars. She is a history instructor at a Birmingham college and writes corporate histories.
Back to Top 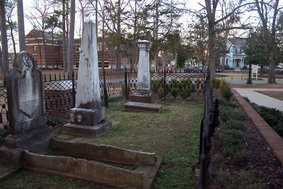 In the early days of the University of Alabama, a one-acre plot of land was set aside as a campus cemetery. Although two students were interred in the cemetery during the antebellum period, one was removed by family. The cemetery also provided a burial place for two university slaves who were honored with a ceremony in 2005. The only marked graves are that of a professor’s family, and the exact location of the other graves remains a mystery.

Additional Information
The following article in the Encyclopedia of Alabama will also be of interest:
About the Author
Pam Jones is a freelance writer and researcher based in Birmingham. 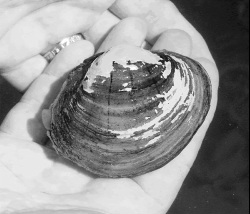 Freshwater mussels in Alabama’s rivers and streams have creative ways of ensuring the survival of their vulnerable offspring. The mussels pack their superconglutinates that resemble flatworms, leeches, or midges. These bundles explode onto the fish that disturbs them, allowing the embryonic mussels to attach to the host fish until they mature.


Additional Information
The following article in the Encyclopedia of Alabama will also be of interest:
Multimedia: