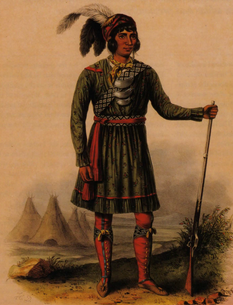 This portrait of Oscela appeared in McKenny and Hall's History of the Indian Tribes of North American (1842-1844) and has long been attributed to artist Charles Bird King, but no evidence supports this claim. (Courtesy Otto G. Richter Library, University of Miami)
Osceola: The Man Behind the Myths

Though he eventually chose to live with the Creeks in Florida, the legendary figure Osceola had both Creek and European heritage. Newspapers raved about Osceola’s exploits against the United States Army in the Second Seminole War, even going so far as to call him invincible. Forced into a permanent game of hide-and-seek with the U.S. government, when Osceola was eventually captured, he quickly succumbed to malaria and died. As Patricia R. Wickman notes, the legend of Osceola did not end with Second Seminole War. This remarkable man’s story lives on in American mythology.

Mahon, John K. History of the Second Seminole War, 1835-42 (1967; Reprint, University Presses of Florida, 1991).
The following article in the Encyclopedia of Alabama will also be of interest:
About the Author
Patricia Wickman is a native Floridian who received B.A. and M.A. degrees in history and museum sciences from the University of Florida, Gainesville, and is currently completing a Ph.D. in Spanish Colonial history at the University of Miami. She has worked in the field of Florida history for twenty-three years, providing consultant services to museums and historical agencies throughout the state and teaching Florida history at the University of Florida, the University of Miami, and Barry University. Wickman is the author of Osceola's Legacy, published in 1991 by the University of Alabama Press (Tuscaloosa, Alabama, 35487-0380. Phone: (205) 348-5180). For the last six months, Wickman has been living among Florida Seminole Indians, teaching Native American history, and consulting on cultural preservation programs on behalf of the Seminole Tribe of Florida. She welcomes letters from readers who have additional information on Osceola. Please write in care of Alabama Heritage magazine.
Back to Top 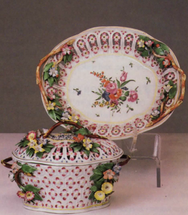 Within the walls of the Montgomery Museum of Fine Arts lies the Loeb porcelain collection, fifty-one unique pieces of porcelain produced by the Worcester Company. Now called “Royal Worcester,” the company is well known for its use of soft-paste porcelain and its durable glaze. The beautiful, uncracked china has endured over two centuries of wear and reveals the merits of the Worcester product.

About the Author
Louise Joyner is project coordinator, Alabama State Council on the Arts, for Alabama SOS! (Save Outdoor Sculpture!), part of a nationwide survey co-sponsored by the Smithsonian Institution 's National Museum of American Art and the National Institute for the Conservation of Cultural Property. Originally from Canada, where she is returning to live in July, Joyner holds degrees in art history from the University of Calgary and Notre Dame University. She has also studied at the Winterthur Museum Delaware, and the Attingham Summer School, England. Joyner has served as guest curator for an exhibition featuring European nineteenth-century veilleuses theieres at the Montgomery Museum of Fine Arts, where she also curated and served as symposium coordinator for Palladia in Alabama: An Architectural Legacy, in 1991. The author would like to thank Margaret Lynne Ausfeld and Pamela Bransford of the Montgomery Museum of Fine Arts, and Mrs. Joan Loeb, for assistance with this article.
Back to Top 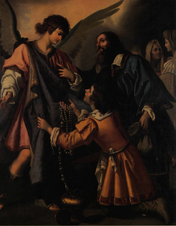 The original painting and artist have not been identified, but this copy resembles the sketch "Tobias and the Angel" by Sogliani. (Courtesy St. Mary's -on-the-Highlands, Birmingham; gift of the Ivey Foreman Lewis Family)
Souvenirs from the Grand Tour

When newlyweds Ivey and Kate Lewis took their Grand Tour across Europe, they made a list of the paintings they wished to be copied and brought home with them. Jeff Mansell observes that their list of religious, mythological, and landscape paintings ranged in style and nationality. For many years these paintings graced the walls of the Lewis’s Marengo County home, Bleak House. The Bleak House collection survived the Civil War as well as several location changes, only to be split upon Kate Lewis’s death in 1925. Today only fourteen of these paintings, adorned with gold-leaf frames, have been located.

About the Author
Jeff Mansell holds B.A. degrees in history and communication and an M.Ed. from Mississippi State University. He is currently completing degree requirements for a master's in history with an emphasis in historic preservation from Middle Tennessee State University. Mansell is assistant director of the Cahaba Trace Commission and director of the Brierfield Ironworks Park at Brierfield. Presently, he is conducting a study of plantation architecture of the Canebrake region and nominating related properties to the National Register of Historic Places.
Back to Top 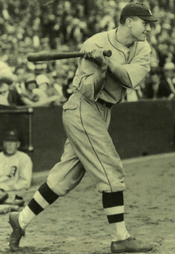 Heinie Manush from Tuscumbia was the first Alabama native inducted into the Baseball Hall of Fame (1964) and the first to play in an all-star game. (Courtesy National Baseball Library and Archive, Cooperstown, New York)
Big Time Baseball: Alabamians in the Major Leagues

Though Alabama was slow to warm up to the idea of baseball, once minor leagues were established in the state, there was no stopping Alabamians from breaking records. Today, Alabama sits behind only New York, California, and Pennsylvania in native players inducted into the Baseball Hall of Fame. Mark Inabinett recounts the ways in which Alabama has shaped the course of baseball, producing such legends as Satchell Paige, Willie Mays, and Hank Aaron, from Charlie “Home Run” Duffee to Bo Jackson.

Additional Information
Aaron, Hank, with Lonnie Wheeler. I Had a Hammer: The Hank Aaron Story (Harper Collins, 1991).
Appel, Martin, and Burt Goldblatt. Baseball's Best: The Hall of Fame Gallery (McGraw-Hill, 1980).
Astor, Gerald, ed., The Baseball Hall of Fame 50th Anniversary Book (Prentice Hall Press, 1988).
The following articles in the Encyclopedia of Alabama will also be of interest: Multimedia:
About the Author
Mark Inabinett is managing editor of the Washington (N.C.) Daily News. Although he holds bachelor's and master's degrees from two basketball powerhouses--the University of North Carolina at Chapel Hill and the University of Kansas, respectively--he has been in love with baseball ever since Hall-of-Famer Carl Yastrzemski became his boyhood hero. Inabinett's interest in Alabama's baseball heritage began during his time as executive editor of Gulf Coast Newspapers, when he lived in Fairhope, the birthplace of former major leaguer Dave Stapleton.
Back to Top

At the Archives
The Flag of the 22nd Alabama Infantry

With this issue, Alabama Heritage begins a new department which will highlight historically significant materials housed at the Alabama Department of Archives and History in Montgomery. Founded in 1901, the Archives is the oldest state agency of its type in the U.S. Bob Bradly, head of Special Collections at the Archives, will serve as the column's editor.

This, the first entry in the series, discusses the flag of the 22nd Alabama, which was issued to the regiment early in 1863 and carried by them until it was captured Sunday, September 20, 1863, during the battle of Chickamauga.

Additional Information
The following items in the Encyclopedia of Alabama will also be of interest:
About the Author
Bob Bradley is head of Special Collections at the Alabama Department of Archives and History, Montgomery.
Back to Top
The Nature Journal
The Deadly Oleander

With this issue, Alabama Heritage begins a new department, "The Nature Journal," which will deal with Alabama's natural heritage. Samford University biology professor L.J. Davenport, whose many interests include endangered species of southeastern plants and the history of botany, will serve as editor of "The Nature Journal" and will write many of the columns.

This, the first entry in the series, deals with Nerium oleander, a flower which grows throughout the state. It is a beautiful, but highly toxic, plant. L.J. Davenport discusses the poisonous nature of the plant, as well as the reasons for its continued popularity.