When Eugene Allen Smith was named state geologist in 1873, he began taking extended summer trips into the Alabama backwoods, noting the natural resources in Alabama's land. His efforts to explore and define the geology of the state helped bring about an industrial revolution, the effects of which are still felt today. Authors Hall and Robb follow the course of Smith's career, from earning a Ph.D. from the University of Heidelberg through the founding of the Alabama Museum of Natural History at the University of Alabama's Smith Hall, a building named in his honor for the achievements of his influential career.
Buy This Feature
Additional Information
The following articles in the Encyclopedia of Alabama will also be of interest:
Multimedia:

About the Authors
John Hall, Assistant Director  of the Alabama Museum of Natural History, last reported to Alabama Heritage on Hernando DeSoto in 1987. Hall, who leads museum educational programs and serves as museum naturalist, says he feels particularly close to the museum's founders when he and the staff conduct summer field expeditions. "The tents and lanterns and the smell of the fire differ not a bit from their camps and allow us an immediate link to their experience. We sit and watch the same stars, hear the same crickets, and rest the same tired feet."

Cultural historian Frances Robb of Huntsville has, since 1988, been "having a love affair with 20,000 photographs" from the museum/geological survey photograph collection. She is particularly interested in E.A. Smith's photographs. "Nothing like them exists in the South," she says. "Not only was he an important early scientific photographer, his classical education and taste gave him a great artistic eye." Robb, who has put nearly 250,000 miles on her vintage station wagon running down Alabama photographs, will include one of Smith's photos in the upcoming exhibition, "Made in Alabama: A State Legacy," opening at the Birmingham Museum of Art this fall.

The authors wish to thank Alexander Sartwell of the Geological Survey of Alabama for his assistance with this article.
Back to Top
Harnessing the Black Warrior River

After the Civil War, with the South's economy in decline, attention focused on coal mining and the use of the Black Warrior River. Improvements in the Black Warrior would allow shipping to the previously unnavigable north and improve the southern passage to Mobile. This article tells the story of the construction of the original 17 locks in the lock and dam system, completed in 1915 under Maj. Andrew Naef Damrell of the U.S. Army Corps of Engineers. Though Tuscaloosa never became "the Pittsburgh of the South" as residents had hoped, the lock and dam system brought about a boom in Alabama's mineral belt economy, and continues to serve as an important transportation link connecting Tuscaloosa and Birmingham to Mobile and the world.

Additional Information
Kenneth D. Willis uncovered information about the Black Warrior's locks and dams in a variety of sources: The U.S. Chief Engineers Annual Reports (1887-1896), the Geological Survey of Alabama's Report of Progress for 1879-1880, minutes from the Tuscaloosa County Commission meetings (August 16, 1880, and March 1895), the 1890s Tuscaloosa Times, and the Tuscaloosa News (November 12, 1922). These materials can be found in the William Stanley Hoole Special Collections Library, University of Alabama. Maps and other valuable information on the locks and dams are available in the Geological Survey of Alabama's library.

The following article from the Encyclopedia of Alabama will also be of interest:
Multimedia:

About the Author
Kenneth D. Willis, of Tuscaloosa County, has long been interested in the Black Warrior River, where he spent many hours fishing with his father, often finding the best fishing around the river's locks and dams. His work with the City of Tuscaloosa Planning and Water Departments and later with the Tuscaloosa County Engineering Department afforded him opportunities to learn more about the river and its history. In 1989 the City of Tuscaloosa published the results of Willis' research, The Harnessing of the Black Warrior River, which formed the basis for this article.

The author wishes to thank Major Damrell's granddaughter, Adalade Damrell Malone, of Fairhope, Alabama, for assistance with this article.
Back to Top 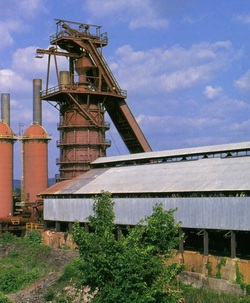 In 1977, to the surprise of almost everyone, Birmingham voters passed a $3.3 million bond issue to begin the work of preserving Sloss Furnaces. The old iron-making plant became a National Historic Landmark in 1981. (Courtesy Robin lvlcDonald)
Sloss Furnaces: A Story of Iron and the Men Who Made It

Birmingham's Sloss Furnaces have long been a symbol of the steel industry which created the "Magic City." And while Sloss Furnaces produced pig iron to feed the city's hungry foundries and mills, much more flowed through the furnaces than just iron: "A whole culture did, a whole way of life," one former worker said. This article tells of the industry at Sloss, noting racial and economic biases within the company, harsh and dangerous working conditions, and the unique measure taken by Birmingham residents to preserve and interpret Sloss as a modern day museum of that era.
Buy This Feature
Additional Information
The following articles in the Encyclopedia of Alabama will also be of interest:
Multimedia:
About the Author
Paige Wainwright, a native of Birmingham, is assistant director at Sloss Furnaces National Historic Landmark. Wainwright, who holds a master's degree in American history from the University of Alabama at Birmingham, has been on the staff at Sloss Furnaces since that facility opened as a museum in 1983.
Back to Top
Voices From Alabama

These interviews, excerpts from J. Mack Lofton, Jr.'s Voices from Alabama: A Twentieth-Century Mosaic (University of Alabama Press, 1993), are the words of industrial workers and their families as they recall the troubles and triumphs of life in the Birmingham district

About the Author
Ten years ago, Mack Lofton, a native of Philadelphia, Mississippi and now a resident of Mountain Brook, Alabama, took an early retirement from his position as sales manager for Sears and began a writing career. His first book, Voices from Alabama, from which this article is excerpted, was published in 1993 by The University of Alabama Press. Lofton, a graduate of Mississippi State University, views the work as a collection of "stories about life" in early- to mid-twentieth-century Alabama. To complete the manuscript, he conducted over 120 interviews with some of the state's best storytellers. The excerpts included in this issue focus on Alabamians in the industrial labor force, but Lofton's book provides interviews with people from all walks of life--former sharecroppers, fishermen, housewives, preachers, and civil rights workers, among many others.

The University of Alabama Press recently accepted another of Lofton's manuscripts, A Time to Heal: An Alabama Medical Mosaic, for publication. Lofton is currently working on another book, this one about the personal experiences of law enforcement officers who have served in Alabama.
Back to Top
The Birmingham Industrial Heritage District

Philip Morris, President of the Birmingham Historical Society, details the development of the Birmingham Industrial Heritage District in this article. The project's intent is to record, interpret, and promote the industrial-based history of the metropolitan region. Also along with plans for the district is a listing of district sites open to the public, from destinations in Birmingham and Tuscaloosa to smaller historical parks and museums in Walker, Shelby, Bibb and Jefferson counties.

About the Author
In June 1991,the National Park Service contracted with the Birmingham Historical Society (BHS) to produce a study of the historical industrial sites in the Birmingham district, a five-county area including Jefferson, Walker, Shelby, Bibb, and Tuscaloosa counties. In particular, the study focused on the area's iron, steelmaking, and coal industries, and on transportation systems that contributed to the growth of heavy industry. Working with industrial archaeologist Dr. Jack Bergstresser, historian of science and technology; Dr. Melvin Kranzberg at Georgia Tech; the planning firm of Cecil Jones & Associates; the National Park Service Cultural Resource staff; and local advisory and steering committees of more than three hundred individuals, the Birmingham Historical Society produced a study of more than one thousand pages. Heading the study were Marjorie White, director of BHS, and Philip Morris, president.

Concurrent with this study, teams from the Historic American Engineering Record (HAER), including architects and historians, helped assess the historical significance of several key sites in the district. Together, the BHS study and the HAER documentation form a basis for the development of a heritage tourism system for the emerging Birmingham Industrial Heritage District.

For an explanation of the heritage district and tourism proposal, see Mr. Morris' essay, pages 44-46, and the map inserted in the center of this issue of Alabama Heritage. Mr. Morris is editor-at-large for Southern Progress Corporation. Assisting in the preparation of the study were Birmingham Historical Society staff members Brenda Howell, Bill Jones, and Carol Slaughter.
Back to Top

The Nature Journal
The Alabama Croton

A topic like "the industrial development of central Alabama" induces nightmares in a naturalist, conjuring up images of slag heaps, slurry ponds, and strip-mined vistas. Yet, in at least one case, such development led directly to the discovery of a new species--a plant cleverly adapted to the harshness of its dwindling "refuge." L.J. Davenport tells the story of the Alabama croton.

About the Author
Larry Davenport is a professor of biology at Samford University, Birmingham.
Back to Top
At the Archives
Immigrants Needed, Please Apply: Publications of a Nineteenth-Century State Bureau

By Michael A. Breedlove

State publications can be a valuable resource for researchers. The Alabama Department of Archives and History has an excllent collection of Alabama state publications dating from the early nineteenth century, including the state Auditor's annual reports, which date from 1820.  These documents reveal important information about Alabama's history--particularly in the years following the Civil War, when the state hoped to develop agriculture and industry. Part of this push was an attempt to attract immigrants to the state. Michael A. Breedlove discusses the efforts of government officials to project an image of Alabama that would appeal to potential immigrants.

About the Author
Michael A. Breedlove is Head, Government Records, Alabama Department of Archives and History, Montgomery.
Back to Top