EDITOR'S NOTE: ​We are honored to have the support of the Alabama Bicentennial Commission (ABC) for this special issue of Alabama Heritage. Please see Alabama200.org for more information about the ABC and upcoming bicentennial-related events. 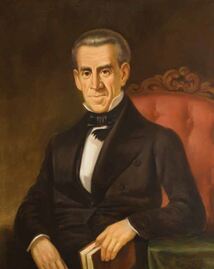 Clement Comer Clay was a delegate to the constitutional convention and chaired the Committee of Fifteen that wrote the first draft. (Photo Courtesy of Alabama Department of Archives and History)
Constitution and Crisis
Outside the Convention Hall, Huntsville, Alabama in the Summer of 1819
by Thomas Reidy

In the ten-plus years prior to its statehood, Alabama experienced substantial growth and prosperity—confidence-building indicators for what life in the area might be like. However, as statehood dawned, many around Huntsville—the state’s initial capital—suffered from economic distress, largely fueled by debts incurred for land. This economic reality contributed to Alabama’s growing population of enslaved persons and shaped the new state socially, culturally, politically, and legally, establishing laws and attitudes that would remain in place for years to come.

About the Author
​Thomas Reidy’s published works deal with topics from the nineteenth and twentieth centuries ranging from slaveholding to civil rights. He recently edited and wrote the introduction to Frances C. Roberts’s extraordinary 1956 dissertation, entitled, “Background and Formative Period in the Great Bend and Madison County,” (under contract with the University of Alabama Press, 2019). In 2013 Reidy played a key role convincing the state of Alabama to posthumously pardon and exonerate the defendants in the celebrated 1931 Scottsboro Boys case (see “Awaiting Justice; The Improbable Pardon of ‘Scottsboro Boy’ Clarence Norris,” Alabama Heritage Summer 2012).

Additional Information
For more information about the Panic of 1819, see the Encyclopedia of Alabama: http://www.encyclopediaofalabama.org/article/h-2568
Back to Top 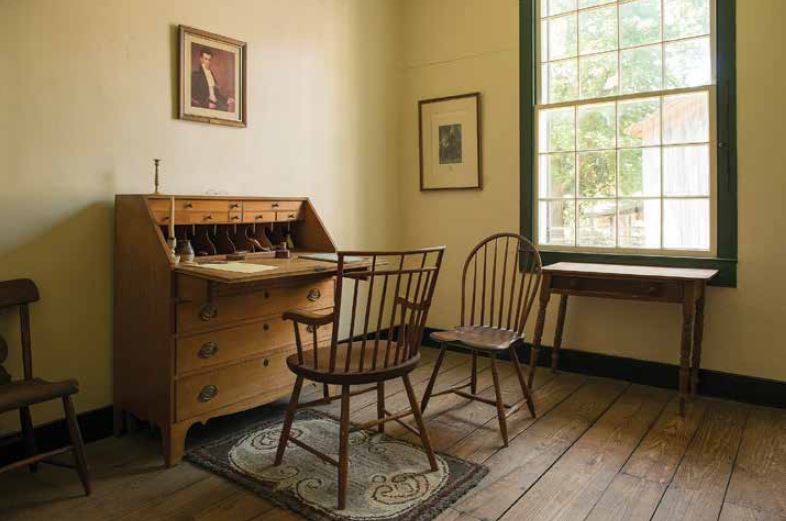 The Committee of Fifteen met in the law office of committee chairman Clement Comer Clay, re-created here in Huntsville’s Alabama Constitution Village. (Photo Courtesy of Robin McDonald)
The Adoption of the 1819 Constitution of Alabama
by Herbert James Lewis

In the summer of 1819, men from across Alabama met to undertake one of the most important events of the proposed state’s origins: drafting its constitution. Many of the forty-four individuals held political experience from other places, but all collaborated to position the new state for success and prosperity. The resulting draft, modeled largely on the United States Constitution, established the form of state government and codified citizens’ rights. In under one month, its drafters had created the document that would guide the state for its first four decades—and shape it for generations.

About the Author
Herbert James “Jim” Lewis earned both his BA in history and his law degree from the University of Alabama. He clerked at the Alabama Supreme Court, served in the US Air Force in the Judge Advocate General’s Office, and practiced law for twenty-six years as an assistant US attorney in Birmingham, Alabama. The Alabama Review published his 2006 article concerning one of Alabama’s earliest attorneys, Henry Wilbourne Stevens. For two years, Lewis edited or contributed numerous entries to the award-winning online Encyclopedia of Alabama. In March 2013 Quid Pro Books of New Orleans published his first book, Clearing the Thickets: A History of Antebellum Alabama. Jim’s second book, Lost Capitals of Alabama, was published by the History Press in November 2014. Lewis currently serves on the board of directors of the Alabama Historical Association, as well as the board of directors of the Shelby County Historical Society.
​
Additional Information
​To purchase Herbert James Lewis’s book Alabama Founders: Fourteen Political and Military Leaders Who Shaped the State, visit the University of Alabama Press store at  http://www.uapress.ua.edu/product/Alabama-Founders,6821.aspx 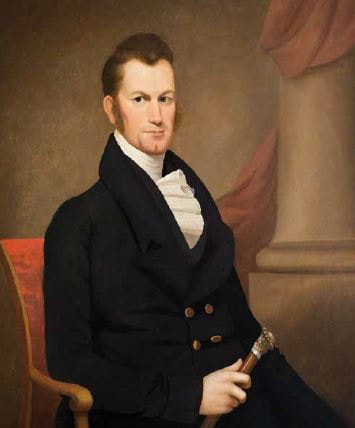 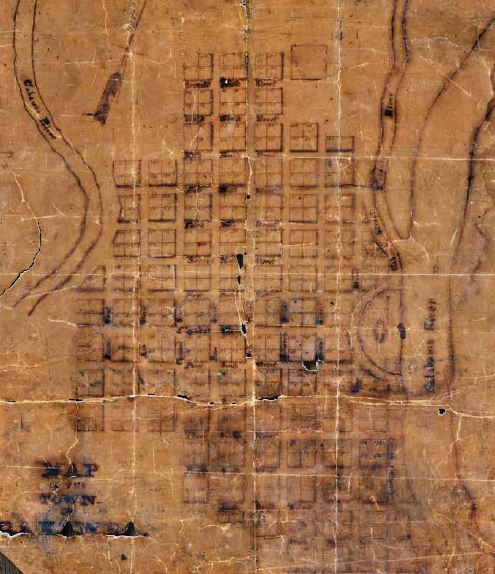 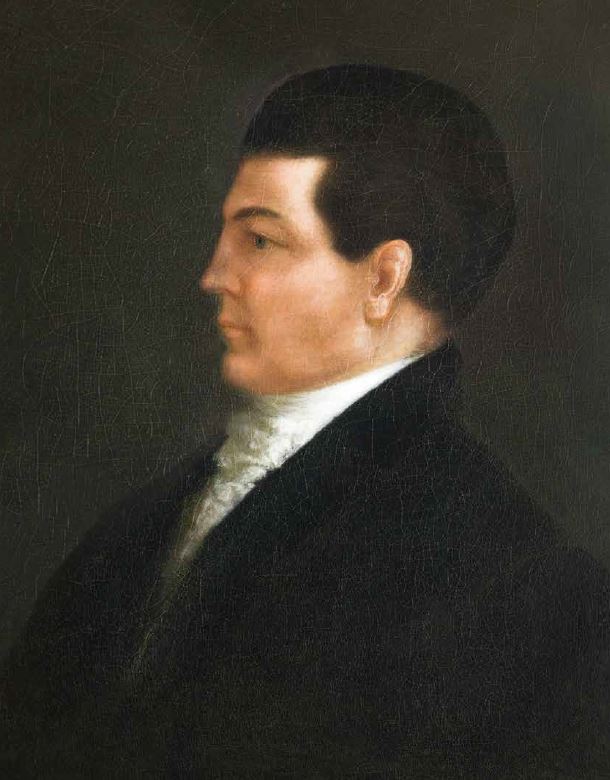 Born in Virginia and established as a key figure in Georgia politics, William Wyatt Bibb also made a significant impact on the Alabama Territory and the new state. Bibb served in both the Georgia and federal legislature, building allies—and some enemies—with his dogmatic positions on contemporary issues. When opportunity opened in the Alabama Territory, Bibb acquiesced, becoming the territorial governor and cementing the authority and prominence for the Broad River Group, a political faction of his Georgia associates. Bibb served as Alabama’s first state governor, a tenure shortened by his untimely death but marked by his influence on the young state’s course.

Additional InformationRead more at the Encyclopedia of Alabama entry for Bibb:
​http://www.encyclopediaofalabama.org/article/h-141
Back to Top 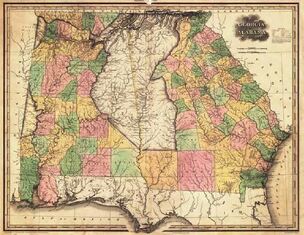 This 1823 map shows the Creek and Cherokee land left in Alabama and Georgia nine years after the Treaty of Fort Jackson. (Photo Courtesy of Alabama Department of Archives and History)
The Creek Nation and Alabama
by Kathryn H. Braund

For white settlers, the formation of the state of Alabama held promise and opportunity, but for many of Alabama’s Native Americans, statehood brought disruption, displacement, and destruction. Creek Indians petitioned to retain their land in the face of encroaching settlers, all too often realizing that the legal protections they had been been granted were no longer honored. Though some Creeks managed to retain some land, changes in the area’s population density and economy disrupted traditional Creek ways of life. And American settlers and politicians often exploited opportunity, setting different tribes against one another and pushing many natives farther west—just one indication of the horrors that lay ahead.

About the Author
Kathryn H. Braund is Hollifield Professor of Southern History at Auburn University. She has authored or edited numerous books relating to the Creek Indians. Her first book, Deerskins and Duffels: The Creek Indian Trade with Anglo-America, 1685–1815 (University of Nebraska Press, 1993), was the first to examine the impact of the deerskin trade on all aspects of Creek society. Braund has also published scholarly articles on the southeastern Indians during the American Revolution, Creek gender and work roles, Creek women during the Red Stick war, and slavery among the Creeks. She has edited and annotated the works of three well-known eighteenth-century writers: William Bartram, James Adair, and Bernard Romans. She is also the editor of two collections of essays: Fields of Vision: Essays on the Travels of William Bartram (University of Alabama Press, 2010) and Tohopeka: Rethinking the Creek War (Pebble Hill Books, 2012). She is currently working on a book about the Creek War of 1813–1814. 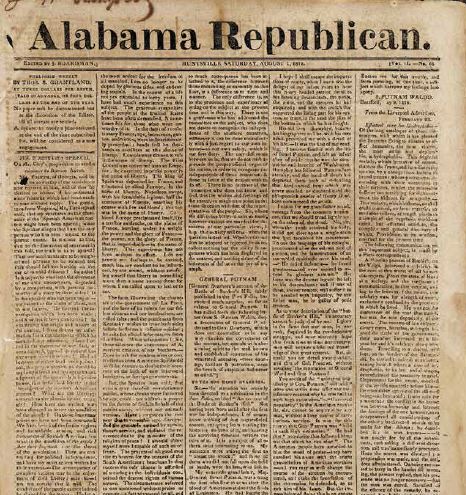 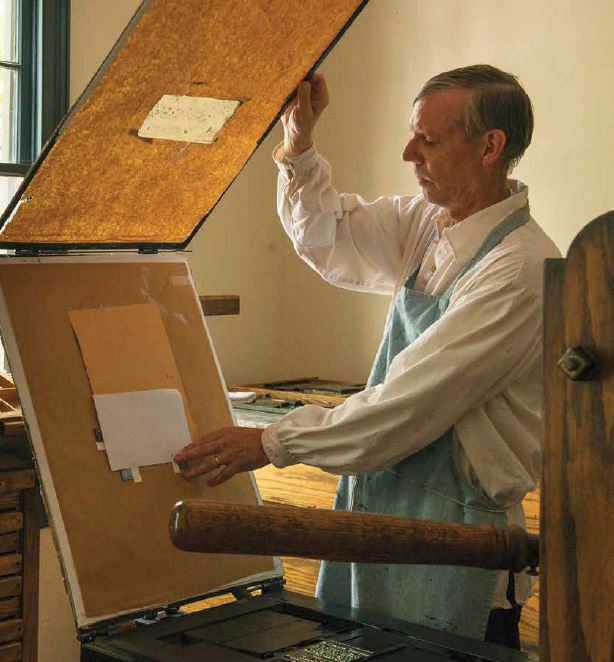 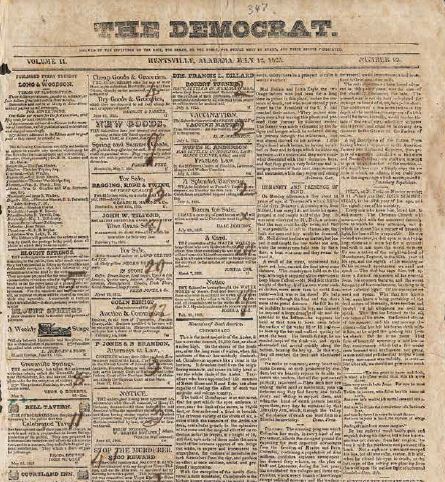 "Liberty is a jewel too precious for compromise or exchange"
The Politics of Banking, Newspapers, and Class in Frontier Alabama
by Thomas Chase Hagood

In the early days of Alabama’s statehood, newspapers helped influence events and, perhaps more dramatically, their perception. As the young state’s leaders navigated how its banking system should function, the issue became a flashpoint representing broader political belief systems. A pair of rival newspaper editors—the Alabama Republican’s John Boardman and The Democrat’s William B. Long—used their respective platforms with abandon, each hoping to shape the state and advance his party’s agenda.

About the Author
Thomas Chase Hagood serves as the director of the division of academic enhancement at the University of Georgia (UGA) where he directs programs and initiatives that foster students’ academic success. He is co-director of the university’s “Reacting to the Past” program. Hagood completed his PhD in history (May 2011) at UGA and began his academic career as an assistant professor of history and rural studies at Abraham Baldwin Agricultural College in Tifton, Georgia. Hagood’s passion for innovative instruction saw his return to UGA in fall 2013, joining the UGA Center for Teaching and Learning as an assistant director. Hagood’s historical research explores nineteenth-century America and American identity formation. His scholarship has been featured in The Southern Quarterly, The Alabama Review, The Journal of Backcountry Studies, and Southern-Spaces.org. Hagood is the co-editor of a forthcoming book on active-learning strategies and reacting to the past. For more on Hagood, see thomaschasehagood.com.

Additional Information
For selections from the Alabama Republican and The Democrat, see the Alabama Department of Archives and History:

The practice of enslaving people has a long history in the Americas, and Alabama is no exception. As a territory and a new state, Alabama allowed this inhumane practice, which enabled the region’s economic growth even as it exploited entire generations of people. Using primary and historical sources, Justin Rudder surveys how slavery and its legacy shaped early Alabama and continues to affect the state today.

About the Author
Justin A. Rudder is the digital asset archivist at the Alabama Department of Archives and History. He received his Master’s degree in American history and archival management studies at Auburn University in 2014. Rudder’s research interests include African American historiography and the similarities between the archival and archaeological professions.

Additional Information
Encyclopedia of Alabama entry:  http://www.encyclopediaofalabama.org/article/h-2369
Born in Slavery: Slave Narratives from the Federal Writer’s Project, 1936 – 1938: https://www.loc.gov/collections/slave-narratives-from-the-federal-writers-project-1936-to-1938/about-this-collection/
The WPA Alabama Writers’ Project (Slave narratives specific to Alabama): http://digital.archives.alabama.gov/cdm/landingpage/collection/wpa
The Half Has Never Been Told: Slavery and the Making of American Capitalism  by Edward E. Baptist (Basic Books, 2016) https://www.amazon.com/Half-Has-Never-Been-Told/dp/046504966
Back to Top 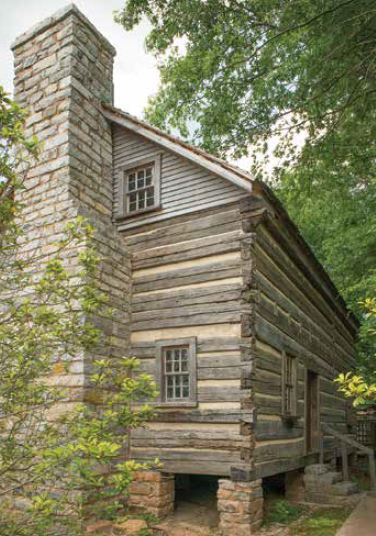 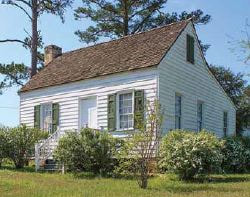 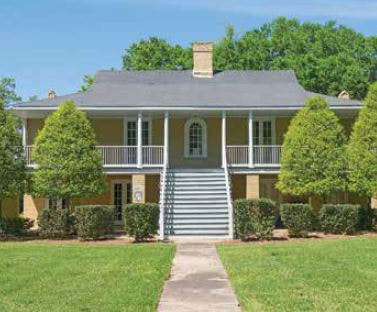 As people moved into the Alabama Territory and settled into life in the new state, the structures they constructed reflected a number of different aspects of life on the frontier, including available materials and resources, builders’ relative economic status, and the architectural styles of the time. Whether a frame house, a log cabin, or a stately brick home, buildings from the state’s first days reveal a wealth of historical and socio-cultural information about their inhabitants and the communities in which they lived.

Additional Information
To find out more about historic structures in Alabama, visit:
http://www.encyclopediaofalabama.org/article/s-154
Back to Top 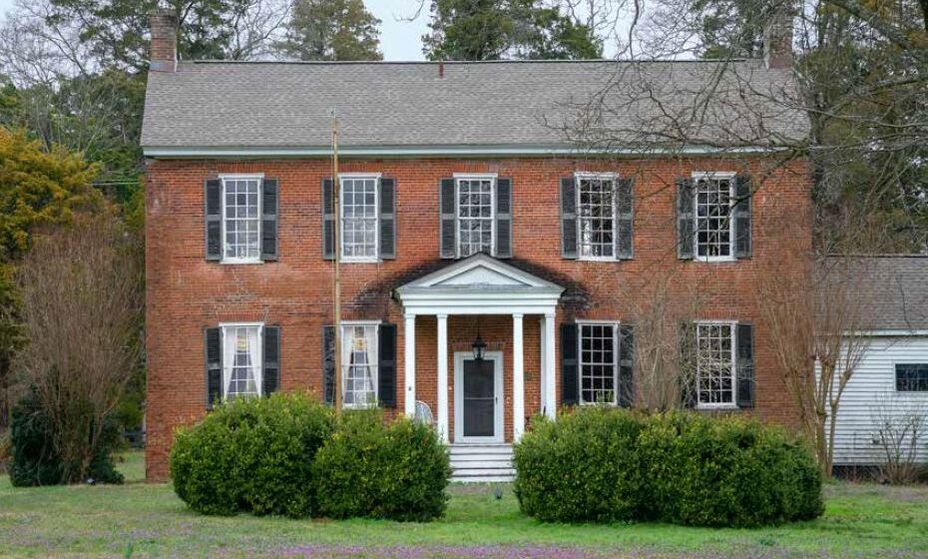 Courtland, in Lawrence County, is home to several early statehood period houses, such as the 1829 Trotter-McMahon House. (Photo Courtesy of Robin McDonald)
Survivors
A Roster of Alabama's Oldest-Known Standing Buildings--Plus an Album of Losses
by Robert Gamble

Though many of Alabama’s early architectural structures have been lost to age and time, some remain, offering contemporary visitors and historians a wealth of information about the eras of their creation and the people who inhabited them. Renowned architectural historian Robert Gamble surveys the most notable buildings from Alabama’s early years, offering insightful commentary about their history and origins and commemorating some significant structures that no longer remain extant.

In a special feature to Alabama Heritage, Sen. Arthur Orr, Chairman of the Alabama Bicentennial Commission, reminds us of the state’s origins and looks toward its promising future.

About the Author
​Sen. Arthur Orr serves as the Chairman of the Alabama Bicentennial Commission.
Back to Top 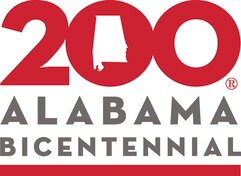 About the Author
Jay Lamar serves as Executive Director of the Alabama Bicentennial Commission.
Back to Top 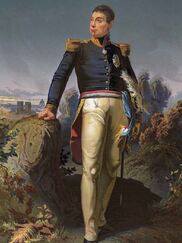 In 1825 Alabama welcomed the Revolutionary War hero Marquis de Lafayette as part of his grand tour of the United States. From 1824 to 1825, Lafayette traveled more than six thousand miles, visiting every state. (Photo Courtesy of the Library of Congress)
The Alabama Territory
Quarter by Quarter: Fall 1819
By Mike Bunn
The final installment of “The Alabama Territory” concludes the history of the territorial period and ushers in the first days of statehood, including the state’s first legislative session. It also surveys the state’s early years—through its first several governors and the economic growth of its antebellum period. Perhaps the young state’s most proud moment, however, came from abroad, when the Marquis de Lafayette decided to stop in Alabama during his celebratory return to tour the United States, a country his Revolutionary War efforts helped create. Alabama emptied its coffers to host the veteran, a sign not just of its patriotism but also of its excitement at being counted, finally, as a state all its own.

About the Author
Mike Bunn serves as director at Historic Blakeley State Park in Spanish Fort, Alabama. This department of Alabama Heritage magazine is sponsored by the Alabama Bicentennial Commission and the Alabama Tourism Department.

Additional Information
​Alabama Heritage, the Alabama Bicentennial Commission, and the Alabama Tourism Department offer this serialized history of Alabama’s road to statehood as part of Alabama’s bicentennial celebrations that will run from 2017 through 2019. Quarter by Quarter allows you to experience the story of the territorial era as it unfolds, ultimately culminating in Alabama’s acceptance into the union as a state—sometimes describing pivotal events, sometimes describing daily life, but always illuminating a world in flux. We will wait for the outcomes as our forebears did—over time. For those joining the story in progress, you can find earlier quarters at www.AlabamaHeritage.com.
Back to Top