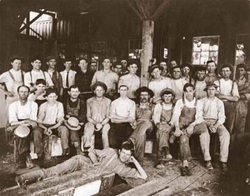 Even long-time Alabama residents may not know that the state has an official rock—Sylacauga marble. Indeed, the stone proves valuable to artists and architects alike, and it has been used in everything from statuary to the ceiling of the Lincoln Memorial. This resource’s popularity and availability have often been tied to the place it originates, and Sylacauga’s fate has risen and fallen along with the marble. Ruth Beaumont Cook takes readers through the history of the city’s marble industry and to the current efforts being made to celebrate and preserve this unique natural resource.

About the Author
Ruth Beaumont Cook is an author and a corporate training facilitator who lives in Birmingham. Her ï¬rst book of narrative history, North Across the River, tells the story of a little-known incident during the Civil War. Her second book, Guests Behind the Barbed Wire, which won a Bronze Medal for History from Independent Publishers Group in 2007, profiles the German POW camp at Aliceville during World War II. Cook is the author of numerous articles about history and the arts forBirmingham magazine and other publications. She is a graduate of Ohio State University, with degrees in German and English education. She serves on the Board of Directors of the Alabama Writers’ Forum and is currently at work on a book about the history of the marble quarries in the Sylacauga area. The author and editors at Alabama Heritage would like to thank Nelda Vogel at B. B. Comer Memorial Library for all of her help in obtaining many of the photos used in this article. 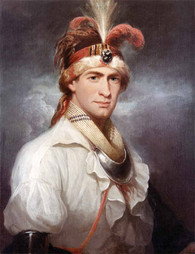 Although born in the American colonies, William Augustus Bowles adhered to his ancestors’ strong sense of British loyalty, and he served with the British during the Revolutionary War. His primary allegiance, however, was to himself, and his adult life was marked by repeated efforts to position himself for personal gain and power. A charismatic and persuasive figure, Bowles enticed followers from many cultures and walks of life. And when he couldn’t earn status, he invented it, even declaring himself the Director General of the Creek Nation—and negotiating with other nations on its behalf. Alabama Heritage Associate Editor Susan Reynolds traces Bowles’s exploits, separating his actions from the many myths that encircled them.

Buy This Feature
About the Author
Susan E. Reynolds earned masters degrees in English and library and information sciences, and a PhD in British literature at the University of Alabama. She spent nearly five years at Southern Living magazine, and now works as associate editor for Alabama Heritage magazine. Her article, "Augusta Evans Wilson: Writer, Rebel, and Family Woman," appeared in the Winter 2011 (99) issue of Alabama Heritage.
Back to Top 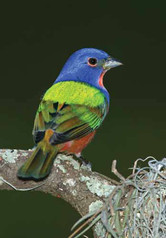 
Alabama Heritage is honored to include in this issue the address delivered by distinguished socio-biologist Dr. Edward O. Wilson at the recent induction of the 2011 class of the Alabama Academy of Honor. In his address, Dr. Wilson—himself an Academy member—discusses the unique biological offerings of his native state and outlines necessary approaches to conserving these natural treasures. As an accompaniment to his address, Alabama Heritage Assistant Editor Elizabeth Wade offers a brief overview of the Alabama Academy of Honor, discussing the history of this organization and highlighting some of the members it has recognized over the decades.

Additional Information
For further information about the Alabama Academy of Honor, please consult its website.

About the Author
Edward O. Wilson is generally recognized as one of the several leading biologists in the world. He is also recognized as one of the foremost naturalists in both science and literature, as well as synthesizer in works stretching from pure biology across to the social sciences and humanities. Wilson is acknowledged as the creator of two scientific disciplines (island biogeography and sociobiology), three unifying concepts for science and the humanities jointly (biophilia, bio-diversity studies, and consilience), and one major technological advance in the study of global biodiversity (the Encyclopedia of Life). Among more than one hundred awards he has received worldwide are the U. S. National Medal of Science, the Crafoord Prize (equivalent of the Nobel, for ecology) of the Royal Swedish Academy of Sciences, and the International Prize of Biology of Japan; and in letters, two Pulitzer Prizes in nonfiction, and the Nonino and Serono Prizes of Italy. 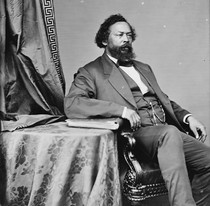 Born into slavery in North Carolina, Benjamin Sterling Turner held little hope of a prominent future. However, he subverted the expectations of his time, teaching himself to read and becoming a trusted member of his various owners’ estates. As a child, Turner moved to Alabama, but when Civil War broke out decades later, he knew his loyalty belonged to the side promising his freedom. Turner did not neglect his home state after the war, however, choosing instead to devote the remainder of his life to public service and that service to improving his Alabama home. His approach garnered him unprecedented recognition and helped him win election to the United States House of Representatives—Alabama’s first African American Congressman.

About the Author
Frye Galliard, a native of Mobile, is writer in residence at the University of South Alabama and the author of more than twenty books about the history and culture of the South. His books include In the Path of the Storms: Bayou La Batre, Coden, and the Alabama Coast, which he co-authored with Sheila Hagler and Peggy Denniston; Cradle of Freedom: Alabama and the Movement That Changed America, which won the Lillian Smith Book Award for best southern non-fiction;Watermelon Wine: Remembering the Golden Years of Country Music; and most recently, With Music and Justice for All: Some Southerners and Their Passions. 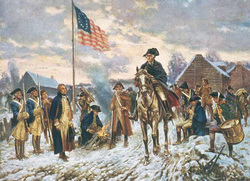 Although a native of Ireland, James McCrory quickly adopted the allegiances of his new land, enlisting in the Continental Army shortly after his arrival in America. He served as a combatant in a number of significant battles and eventually became entrusted as one of George Washington’s bodyguards. After the war, he and his family helped establish the town of Vienna, Alabama, where he continued to devote his adult life to developing the new nation that had welcomed him when he was a teenager.

About the Author
Thomas V. Ress is a freelance writer who resides in Athens, Alabama. He writes about adventure, outdoor destinations, and Alabama history. 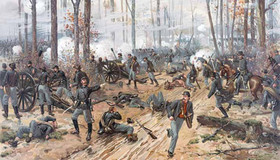 
Editor’s Note: Alabama Heritage, the Summersell Center for Study of the South, the University of Alabama Department of History, and the Alabama Tourism Department offer this department as a part of the statewide "Becoming Alabama" initiative—a cooperative venture of state organizations to commemorate Alabama’s experiences related to the Creek War, the Civil War, and the civil rights movement. Quarter by quarter we will take you to the corresponding seasons 200, 150, and 50 years ago—sometimes describing the most pivotal events, sometimes describing daily life, but always illuminating a world in flux. We will wait for the ultimate outcomes as our forbears did—over time. For those joining the story in progress, you can find earlier quarters on our website.

In the latest installment of Becoming Alabama, the authors continue to trace developments at crucial times in Alabama’s history. Joseph Pearson takes us back to early 1812, when settlers flowed into the territory containing what would become the state of Alabama. Excited by the promise of trade and the lucrative cotton market, people came to the territory in great numbers. Not everyone was pleased by the growing population, though, and settlers and native communities continued to negotiate the division of land and resources. In the Civil War era, Megan Bever looks at the Battle of Shiloh, which exacted a ghastly toll on both factions of the conflict. Although the losses were unprecedented at the time, more bloody battles lay ahead. Finally, Matthew Downs revisits the Albany Movement and the tensions brewing among groups with different approaches to civil rights activism.

Back to Top
Recollections
In the Shadow of Burning Crosses

Although accounts of the civil rights movement abound, few people who witnessed a Ku Klux Klan rally have ever spoken of it on the record. In this special edition of Recollections, Gaye Duncan Holman remembers the night she and a friend left the safety of Birmingham-Southern College to see first-hand what was happening nearby—and how that night changed both Holman and the community around her.

About the Author
Gaye Duncan Holman returned to Kentucky after graduation from Birmingham-Southern College and worked as a social worker and teacher, recently retiring as professor of sociology at Jefferson Community and Technical College.
Back to Top 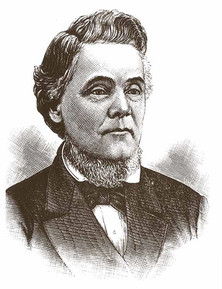 Although marked by a fiery and polarizing temperament in his younger days, James DeVotie matured into a significant and influential figure in the Baptist church throughout Georgia and Alabama. A pastor, editor, and educator who helped found present-day Samford University, DeVotie worked to organize and expand the south’s Baptist population. DeVotie’s life remains particularly compelling, allowing us to consider the way the cultural standards governing race relations were both incorporated into and modified by the church.

About the Author
Christopher Peters is a PhD student at the University of Alabama, with an interest in southern religious history. He is currently working on his dissertation, a biographical study of James H. DeVotie, providing a lens into southern religious life in the nineteenth century.


Alabama Heritage’s resident nature expert Larry Davenport gets to the root of Tony Joe White’s "Polk Salad Annie," a popular song from his childhood. In the process, he takes readers on a tour of linguistic and botanic history, explaining just what makes poke weed song-worthy—and deadly.

About the Author
Larry Davenport is a professor of biology at Samford University. This column, running since 1993, inspired his recent book Nature Journal(University of Alabama Press, 2010). 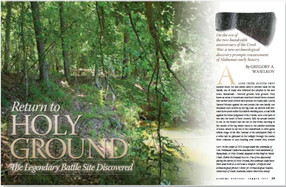 
Alabama Heritage often highlights significant sites in need of preservation. In this special update, Alabama Heritage revisits Old Cahawba and Holy Ground, letting readers know about the progress that’s been made and the work still to be done.

About the Author
Linda Derry is the Park Director and Senior Archaeologist at Old Cahawba Archaeological Park, a property of the Alabama Historical Commission. Gregory Waselkov is an archaeologist with the University of South Alabama with particular interests in the colonial and early American periods, including the Redstick War of 1813–1814.

Back to Top
Reading the Southern Past
The Civil War—Again