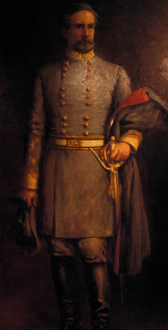 By Michael B. Ballard

John C. Pemberton was one of the most reviled generals of the Civil War. Though he fought for the Confederates, he was born in Philadelphia, Pennsylvania. His first command as a major general was a disaster because he lacked skill in public relations. He failed to defend the Confederate stronghold in Vicksburg, Mississippi, surrendering after a siege of forty-seven days. Anxious to tell his side of the story, he waited in Demopolis, Alabama, for a court of inquiry to convene--but it never did. He returned at last to Virginia, where Jefferson Davis failed to give him a new command. Finally, Pemberton resigned and accepted a new commission as lieutenant colonel of artillery, a position in which he fought until the end of the war. Pemberton remains a cipher: was he inept, cowardly, or just misused?

Additional Information
Significant collections of John C. Pemberton's papers can be found in three archival repositories: the Historical Society of Pennsylvania, which has the largest number of known Pemberton letters from the antebellum and postbellum periods; the National Archives, containing Pemberton's official Civil War papers; and the Southern Historical Collection, University of North Carolina at Chapel Hill , where the John C. Pemberton Papers, including records and correspondence from all periods of his life, are located.

The North Carolina collection contains items collected and used by Pemberton's grandson, John C. Pemberton III, in his book, Pemberton: Defender of Vicksburg (Chapel Hill, 1942). Despite its partisan tone, the volume is useful because it contains data derived from oral tradition within the Pemberton family. Until the recent publication of Pemberton: A Biography, by Michael Ballard, Pemberton: Defender of Vicksburg was the only book available on the subject and, therefore, greatly influenced historians' interpretations of the confederate general.

About the Author
Michael Ballard holds a Ph.D. in history from Mississippi State University, where he lectures in history and is head of university archives. He has published three books, all with the University Press of Mississippi: A Long Shadow: Jefferson Davis and the Final Days of the Confederacy (1986); Landscapes of Battle: The Civil War, with David Muench (1988), and Pemberton: A Biography (1991). His books on Davis and Pemberton were both History Book Club selections.
Back to Top

William Isaac Mulder made pottery in Montgomery, including, most likely, these alkaline-glazed jugs from the Wetumpka area. (Jugs courtesy of Margaret Anne Mulder Kelley; photograph by Joey Brackner)
Decorative Arts in the Black Belt

A 1985-1994 survey of Alabama's decorative arts reveals a wealth of new information about the cultural history of the state.  This feature highlights the work of artisans from one of the survey areas most thoroughly investigated at the time of publication, the Black Belt.  The river towns that sprang up there during the early nineteenth century served as commercial centers for the region and connected the Black Belt to the port of Mobile. The towns also attracted artisans and craftsmen who produced necessities and luxury items for local markets as well as for other communities in the vicinity.

Additional Information
About the Authors
Bryding Adams is curator of decorative arts at the Birmingham Museum of Art and director of the Alabama Decorative Arts Survey.

Joey Brackner, folklife program manager for the Alabama Stare Council on the Arts, is a specialist in Southern pottery.

Anyone possessing objects made in Alabama prior to 1930 and interested in including them in the Decorative Arts Survey should contact Katherine Estes, Field Researcher, Birmingham Museum of Art, 2000 Eighth Avenue North, Birmingham, Alabama 35203. All names are kept confidential. The Decorative Arts Survey is funded by the Birmingham Museum of Art, the Colonial Dames of Alabama, the Alabama Humanities Foundation, the Daniel Foundation, the Linn-Henley Charitable Trust, the John and Delia Robert Charitable Trust, and the Birmingham Quilt Guild.
Back to Top 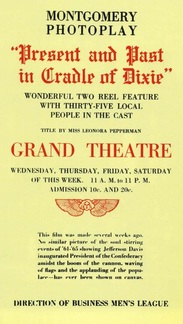 The front cover of the original theater program. The film's debut played to capacity crowds. (Courtesy Alabama Department of Archives and History)
"Present and Past in the Cradle of Dixie"

In 1914 the Business Men's League of Montgomery funded the production of a short film with the hope of attracting out-of-state business to Alabama. The plot features a Southern belle romancing a gentleman from New England by showing him the sights of Montgomery. After its premier, the film dropped from public consciousness. In the 1920s, the original print was donated to the Alabama Department of Archives and History, where it was forgotten until rediscovered in 1986. Now restored, the film provides a fascinating glimpse of pre-World War I and its inhabitants.

Buy This Feature
Additional Information
Sources used at the Alabama Department of Archives and History include the provenance files, the Montgomery Advertiser, the Junior League Scrapbook, the public in formation subject files, the surname files, and Thomas Owen's History of Alabama and Dictionary of Alabama Biography.

About the Author
Tanya L. Zanish received her B.A. in history and medieval studies from Ohio Wesleyan University and her M.A. in historical and archival administration from Wright Stare University. Before moving to Alabama in 1989, Zanish worked as an archival consultant for Systech Corporation and the Montgomery County (Ohio) Historical Society. She is currently a special collections archivist at the Alabama Department of Archives and History (ADAH). The author wishes to thank Edwin C. Bridges, director, ADAH; Alden Monroe, assistant director, ADAH; and Martin McCaffery, director, Capri Theater, for their assistance with this article.
Back to Top

By Jerry A. Davis

Finally given the opportunity to become fighter pilots, African Americans brought credit to their country during World War II. Though the War Department was hesitant about sending the pilots into combat overseas, the Tuskegee airmen proved to be invaluable in the war effort. They were pivotal in the advance at the Remagen Bridge. In a time when the military was still segregated, the Tuskegee airmen proved that the race of a properly trained soldier was insignificant. What mattered was the training.

Additional Information
About the Author
Jerry Davis, a native of Tuscaloosa, Alabama, received his B.A. in history and Russian studies from Tulane University and his M.A. in American Studies from the University of Alabama. For the past year, Davis has been an instructor in world history at Spelman College, Dekalb College, and the Southern College of Technology, all in Atlanta, Georgia.

The author and the editors would like to thank Lt. Col. Charles Dryden, USAF (Ret. ), Lt. Col. Herbert Carter, USAF (Ret.), and Timothy Cronen and Nick Parrella of the Smithsonian Institution for their assistance with this article.
Back to Top

Art in the South
A Stained-Glass Tiffany Knight

The library at the University of Alabama boasts a remarkable stained-glass window featuring a "Christian Knight." Designed in 1925 by Tiffany Studios in New York and commissioned by the Alabama Division of the United Daughters of the Confederacy, the handsome memorial commemorates the role university students played in the Civil War.

About the Author
Robert Mellown is a professor of art history at the University of Alabama.
Back to Top