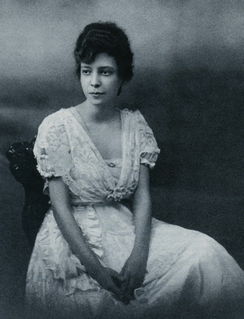 Wearing her grandmother's dress, eighteen-year-old Sara Powell Haardt is pictured here as a graduate of the Margaret Booth School, Montgomery, 1916. (Photograph courtesy Ed Worteck and reproduced by permission of the Enoch Pratt Free Library)
Sara Haardt and the 'The Sweet, Flowering South'

When Sara Haardt left her Montgomery home in 1917, she vowed never to return to the South. Heading north to Baltimore for college, she quickly found unarguable literary success, while also meeting and marrying editor, essayist, and perhaps the harshest critic of the American South of the time, H. L. Mencken. While it is as Mencken's wife she is best remembered, in her time Haardt's writing was best known for being shaped and influenced by the region she fled, the place she called "the sweet, flowering South, the clinging tyranical South."

In her article, Henley describes the intricate courtship of Mencken and Haardt, the physical frailties and sickness which brought about Haardt's tragic premature death, and the literary achievements she created during her short life. With details from her early years in Alabama through her final trip abroad to Egypt with Mencken, Haardt is shown to be an unfairly overlooked literary figure from the South, with a legacy rarely accorded the recognition it deserves.

Additional InformationThe following articles in the Encyclopedia of Alabama will also be of interest:
About the Author
Ann Henley received her Ph.D. from the University of Alabama, where she was an instructor in the English department. She is currently at work on an edition of Sara Haardt's short stories for the University of Alabama Press. In addition to her work on Sara Haardt, Henley has published articles on Virginia Woolf and contemporary writers Josephine Humphreys and Nadine Gordimer. She lives with her husband and daughters in Chapel Hill and teaches at North Carolina State University.

The editors wish to thank Ed Worteck, chairman of the art department at Goucher College, for his assistance in obtaining photographs for this article.
Back to Top 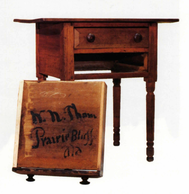 Since 1985 the Birmingham Museum of Art has been conducting a survey of decorative arts made in Alabama between 1819 and 1930, canvassing each region of the state, locating and documenting Alabama-made objects. Unlike silver or paintings, which are nearly always signed by their creator, furniture rarely contains information about its craftsman. However, the objects in this exhibit all have documented provenances or traceable markings linking them to Alabama. In a series of detailed photographs, Estes describes the intricacies of the furniture pieces, revealing that, although the pieces may look primitive, Alabama cabinetmakers were in fact experienced master craftsmen.

Additional InformationThe following article in the Encyclopedia of Alabama will also be of interest:Multimedia:
About the Author
Katherine Estes, field researcher for the Alabama Decorative Art Survey, has been employed by the Birmingham Museum of Art since 1989. In addition to her survey work, she is helping organize a major travel exhibition entitled "Alabama Decorative Arts: A State Legacy," which is scheduled to open at me Birmingham Museum of Art in September 1994. Estes will write the furniture essay and catalog entries for the exhibition catalog.

Research for this article was drawn in part from 1820-1880 Alabama county census records, nineteenth-century Alabama newspapers, documented oral tradition, and the Alabama Decorative Arts Survey files. Although ownership of individual pieces is kept confidential, survey files-including photographs and fact sheets on each object-are open to the public by appointment. For an appointment, contact the author or Bryding Adams, Curator of Decorative Arts, Birmingham Museum of Art, (205) 254-2566.
Back to Top 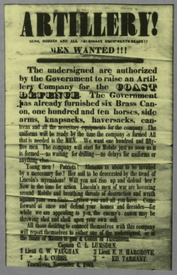 In 1861, Captain Lumsden published a broadside advertising for men to join his light artillery company. More than 200 pf the 225 men who volunteered were from Tuscaloosa Country, among them James T. Searcy.
When Shall Our Cup Be Full?: The Correspondence of Confederate Soldiers James T. and Reuben M. Searcy

December 28, 1862, Murfreesboro, Tennessee…We are on the eve of a big battle…Orders have already come-I go into battle with a full hope and trust and confidence in God-both as regards my own welfare-and that of my country. I feel more for Reuben than for myself-God go with us.

So writes Confederate artilleryman James Searcy to his father in Tuscaloosa, Alabama. James, twenty-two, enlisted in the Confederate army two years after graduating from the University of Alabama, and his younger brother Reuben, then an eighteen-year-old sophomore in the Cadet Corps at the University, soon followed, against the wishes of his family and teachers, as well as his older brother James.

Through their correspondences to each other as well as to family back in Tuscaloosa, the two describe the hardships of army camp, bouts with sickness, and the excitement and horror of combat. The brothers, both literate and astute observers of their surroundings, detail their experiences in these letters, revealing their first impressions of army life through the 1863 battle of Murfreesboro, Tennessee, where Reuben was mortally wounded. Using the surviving one hundred fifty letters from James and thirty three from Reuben, Elebash, the great-great grand nephew of the Searcy brothers, relates a moving tale which serves as a vivid reminder of the triumphs and tragedies of two Civil War soldiers.

Additional Information
Of special help to Elebash in his research were the microfilmed Confederate Military Service Records of James Searcy, Reuben Searcy, and James Maxwell located in the Birmingham Public Library; A History of Lumsden 's Battery CSA, published in 1905 and written by Dr. George Little and James R. Maxwell; "The Doctors Searcy, Reuben Searcy and His Descendants" by Emmett B. Carmichael, published in the Journal of the Medical Association of the State of Alabama (Vol. 37, No. 2, August 1967); and James Maxwell's autobiography, all of which are located in the William Stanley Hoole Special Collections Library, University of Alabama.

The following items at the Encyclopedia of Alabama will also be of interest:
About the Author
Maxwell Elebash, a native of Tuscaloosa, graduated from the University of Alabama in 1981 with a degree in history and served as an infantry officer in the United States Marine Corps. Now involved in heavy equipment sales in Tuscaloosa, Elebash continues to pursue his interest in history, particularly the Civil War and his own family's involvement in that conflict. Elebash is the great-great nephew of James T. and Reuben M. Searcy and the great-grandson of their younger brother, George Alexander Searcy.

"I became interested in their story," Elebash writes, "after reading of Reuben's death in the Autobiography of James Robert Maxwell, a book given to me by my maternal grandfather, the late Frederick R. Maxwell, a cousin of James R. Maxwell. "I set about finding Reuben's grave, finally locating it in a run-down cemetery in Murfreesboro, Tennessee, in 1988. I then  discovered that the late Annie Ross Dee, a granddaughter of James T. Searcy, had typewritten copies of James' and Reuben's letters that their sister Evie Searcy had earlier transcribed by hand."

Evie Searcy's handwritten volume is now housed in the Alabama Department of Archives and History in Montgomery. A number of the original letters also survive and are located in the University of Alabama's Special Collections Library. Elebash's great-aunt, Augusta Searcy Sledge, also has a few original letters, as well as many family photographs, which she graciously loaned to Alabama Heritage for this article.
Back to Top

By Mark A. Palmer

When Guy Cobb died at the Tuberculosis Prison Hospital at Wetumpka, Alabama, in 1932, few marked his passing except perhaps the clerk who made the citation of the fact. Cobb's prison career, however, which included at least seven escapes, was anything but unremarkable. The details of that career, as of many other prisoners, are part of the Alabama Department of Corrections and Institutions records housed at the Alabama Department of Archives and History. Cobb's story is an example of the sorts of things that can be gleaned from among these records.

About the Author
Mark A. Palmer is a government records archivist at the Alabama Department of Archives and History, Montgomery.
Back to Top 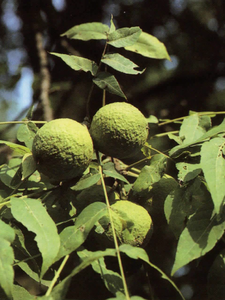 Black walnut trees, found in all but southernmost Alabama, produce a powerful natural herbicide which inhibits the growth of wither plants in a broad ring around each tree. (Photograph by Larry Davenport)
Nature Journal
Black Walnuts

Black walnut trees--easily identified by their pinnately compound leaves and dark grey bark--offer many lessons in sheer usefulness. L.J. Davenport discusses these lessons in this entry in The Nature Journal.

About the Author
Larry Davenport is a professor of biology at Samford University, Birmingham.
Back to Top
Art in the South
An Alabama Portrait Returns Home

Georgie Bibb (1848-1920), granddaughter of William Wyatt Bibb, territorial governor of Alabama and first governor of the state, was painted circa 1853. The portrait is attributed to artist Philip Romer, who lived near Mobile. After years of exile in the North, this portrait recently returned to the state, acquired by Jack and Emily Burwell of Huntsville, collectors of Southern antiques.

About the Author
Robert O. Mellown is an associate professor of art at the University of Alabama.
Back to Top
Report from the Historical Commission
The National Register: Facts, Myths, and Misconceptions

By Melanie A. Betz

The National Register of Historic Places means different things to different people. To some, it is the highest status for recognizing historic and architectural resources; to others, it implies troublesome restrictions and government interference. Still others believe that inclusion on the National Register provides ultimate protection for the nation's important properties. In many instances, these views are incorrect. Melanie A. Betz untangles the fact from the myth in this report from the Historical Commission.

About the Author
Melanie Betz is the coordinator of National and Alabama Register programs for the Alabama Historical Commission.
Back to Top