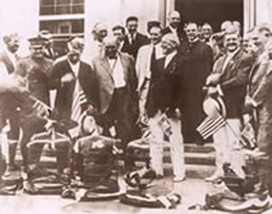 When construction of the nation's first cross-country highway came to a halt in 1919 at the edge of the Tombigbee River, the citizens of Demopolis, Alabama, went looking for help. They found it in a certain fine feathered friend. Becky Willis tells the story of the Dixie Overland Highway Association's plan for a road that would stretch from San Diego, California, to Savannah, Georgia, which ran into trouble in Demopolis-a city on the only major waterway east of the Mississippi River where vehicles were still ferried across by boat. To pay for the needed bridge, the citizens of Demopolis sought the help of an imaginative fundraiser named Frank Derby, who came up with a scheme that was just crazy enough to work. Derby planned to "Bridge the 'Bigbee with Cocks" by holding a rooster auction. Willis describes how the auction turned into a raucous and energetic scene, all in the name of progress gained by the old-fashioned rooster.

Buy This Feature
Additional Information
Further information on the Rooster Bridge and auction can be obtained in the files of the following:
The following items in the Encyclopedia of Alabama will also be of interest:

About the Author
Rebekah (Becky) Allen Willis was reared near Demopolis in the Old Spring Hill area of Marengo County. She commuted across the Rooster Bridge several times a day while obtaining her Associate Degree of Nursing from Livingston University, now the University of West Alabama. She is a member of the Friends of Gaineswood and the Marengo County Historical Society. She is currently involved with her family and historical research. She is co-chairman of the Heritage Book of Marengo County, in which she contributed numerous family and historical articles, including the Civil War section of the book. Her love and appreciation of history developed from her mother, Ruth Simmons Allen; her grandfather, Charles Edward Allen Jr., and the many story-tellers of Marengo County.

For their input and help with this article, Becky would like to thank the following: Joyce Lamont, PhD., retired director of
the Stanley Hoole Special Collection Library of the University of Alabama; Ruth Simmons Allen, genealogist of Old Spring Hill; Tom Compton, son of Clee Compton of Demopolis; Catherine Ortman Kilgore, daughter of Archibald Ortman of Demopolis; Kirt Brooker, Operations Manager of the Marengo County Historical Society for the use of the Robert Hudson photography collection; Robert Ellis Simmons Jr., of Birmingham; Gwendolyn Turner of Demopolis and Evelyn Maxey of Demopolis.
Back to Top 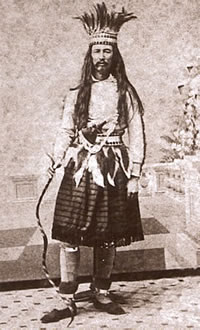 As Mardi Gras approaches, many Mobile revelers might not recall the amount of struggling and strife one dedicated rabble-rouser went through to bring such a celebration back to life after the Civil War. David Harwell explores the origins of Mobile's legendary Mardi Gras celebration, which he attributes to the almost single-handed work of a Confederate veteran named Joe Cain. In 1866, on Fat Tuesday, "leaving his clerk's post at the Old Southern Market on Royal Street, Joe Cain went for a ride." Dressed as the make-believe Chickasaw chief Slacabamarinico, Cain, along with several other ex-Confederates, banged on musical instruments while riding in an ox cart all over city. Their tomfoolery was such a hit that the people of Mobile soon began planning future Fat Tuesday celebrations. Cain's traditions have been carried on ever since. Harwell explains the development of many Mardi Gras traditions in Mobile, and details how Cain's story, which faded after his death in 1903, has reemerged to modern party-goers who now celebrate "Joe Cain Day" each year on Shrove Sunday in Mobile.

About the Author
David Harwell, M.A., teaches English at the University of Alabama. Specializing in American literature, his teaching interests include professional oral and written reports, argument and rhetoric, contemporary American literature, and literature of the American South. Major author interests include Walker Percy William Faulkner, and Kurt Vonnegut. Harwell has just completed the manuscript for Walker Percy Remembered,  a dissertation project to establish an oral history of the author. 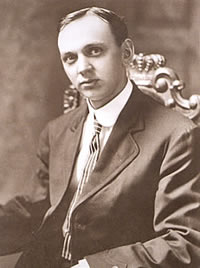 Before there was the Psychic Hotline, there was Edgar Cayce. Who knows? There may still be an Edgar Cayce. Aaron Welborn investigates the enigmatic life of America's most famous psychic, faith healer, and clairvoyant. From his early years in Kentucky, to his eleven-year stay in Alabama, to his eventual death in Virginia, Welborn traces the curious path of the photographer-turned-"psychic diagnostician" whose following has spread around the world since his death. Cayce's time in Alabama was intended to be a respite from the media attention of his psychic gifts, during which he worked as a portrait photographer. But when his son was blinded by chemicals in Cayce's darkroom, Cayce hypnotized himself to diagnose his son's problem and prescribe a solution in an attempt to save his son's sight. The attention he gained afterwards convinced Cayce to follow his gift, traveling all over the country diagnosing health problems and devising remedies. Eventually Cayce decided to set up a hospital where his unorthodox remedies would be followed, where he worked until his health faded in January of 1945, when he passed away, never to return to Alabama.

Buy This Feature
Additional Information
The following article in the Encyclopedia of Alabama will also be of interest:

About the Author
Aaron Welborn is assistant editor of Alabama Heritage. An alumnus of Birmingham-Southern College, he is
currently pur uing a Master of Fine Arts degree in creative writing at the University of Alabama, where he also
serves as an assistant editor for Black Warrior Review, a nationally acclaimed literary magazine published by the university. He wishes to thank Jeanette Thomas, administrator of records for the Edgar Cayce Foundation, who furnished numerous photographs for this article.
Back to Top 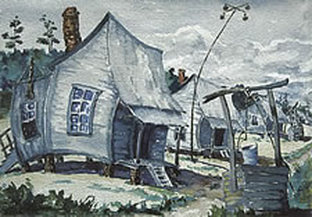 When the Mobile Museum's new building is finished, prominent exhibits will include art works from the Dixie Art Colonists, including the paintings of Carlos Alpha "Shiney" Moon. Author Lynn Bartis Williams reveals how this former photographer and businessman became a celebrated artist. In an effort to revive his daughter's interest in her oil paint set, one day Moon picked up a brush and started dabbling. His work proved incredible and with instruction from well-known Dixie Art Colony leaders Kelly Fitzpatrick and Genevieve Southerland, Moon's paintings grew bolder. He tended to favor southern scenes in his artwork, but he also began reflecting the increasingly popular styles of modernism and abstraction. Moon found himself winning awards, instructing other painters, and presiding over various art clubs. However, Moon's early death at age 47 kept him from becoming the best artist that he possibly could.

About the Author
Lynn Barstis Williams is a reference librarian who is currently in charge of art and special collections at Auburn University Libraries. Her article on the history of Alabama's Gulf Coast art colonies, which Genevive Southerland
organized in Mobile, Bayou La Batre, and Coden, appeared in the May 2000 issue of Gulf South Historical Review. She also has published an article on the Dixie Art Colony in Alabama Heritage, issue 41, Summer 1996. She is currently working on a book on southern printmakers from the 1920s, 30s, and 40s, and is searching for etchings by Mary Wallace Kirk of Tuscumbia and Richard Coe of Selma and Birmingham.
Back to Top

Recollections
"Business Has Been My Pleasure": Gleanings From the Letters of Charles Linn

Charles Linn, in writing letters of fatherly advice to his son, Edward, outlined the business sense that led Charles to found one of the South's largest financial companies. John Massey looks at the life and advice of this man, the founder of one of Birmingham's first banks.

Additional Information
The following items in the Encyclopedia of Alabama will also be of interest:
About the Author
John Massey is an artist and writer living in Birmingham, Alabama.
Back to Top

L.J. Davenport examines the habits and physical configuration of the flatfish, a bizarre fish with its eyes on the same side of its head.

Additional Information
The following items in the Encyclopedia of Alabama will also be of interest:
About the Author
Larry Davenport is a professor of biology at Samford University, Birmingham, Alabama.
Back to Top