In July of 1864, Walt Whitman was a relatively unknown, under-employed, forty-five year old poet, living in Washington, D.C. With the war on, he supported himself by working part-time copying documents in the army paymaster’s office. He also served as a volunteer nurse to war casualties. His real work, however, was completing his volume of war poetry, Drum-taps, which drew heavily on his experiences caring for the injured and dying. Included in the collection, published in 1865, was "Cavalry Crossing a Ford," a seven-line poem that is widely considered one of Whitman’s best. In the Fall issue of Alabama Heritage, Betty Barrett reveals intriguing evidence that the cavalry in question were Union troops under the command of Gen. Lovell H. Rousseau, and the ford they crossed was at Ten Islands on the Coosa River in St. Clair County, Alabama. In fact, not only does the poem recreate a scene from Rousseau’s July 1864 raid through Alabama, it relies heavily on the language and imagery of an anonymous war correspondent’s report of the events.

About the Author
Betty Barrett holds a Ph.D. in comparative literature from Emory University. A retired teacher, she now works for the Chambers County Library in Valley, Alabama, and its branch in Lafayette, where she lives with her husband, a retired minister.

The author wishes to thank Miriam Syler, archivist for the Cobb Memorial Archives of the H. Grady Bradshaw Chambers
County Library, for her assistance in research for this article.
Back to Top 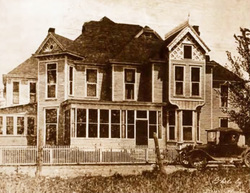 Millie Teal's house became an infirmary,
which was the forerunner of the current hospital
(Bob Ward and The Huntsville TImes)
Historic Huntsville Houses (and We Don’t Mean Homes)

When Mollie Teal, a well-known businesswoman, bequeathed her home to the City of Huntsville at her death in 1899, she requested that it be used as a school or a hospital. Why, then, was there a column in Hunstville’s Evening Tribune denouncing the newly-passed Teal as a scourge against the community? Bob Ward details the life of the controversial Ms. Teal in the Fall 1999 issue of Alabama Heritage. It seems that the business behind Teal’s philanthropy was prostitution. In fact, Mollie Teal was the flamboyant madam of a brothel considered to be the largest and finest "sportin’ house" Huntsville ever saw.

About the Author
Robinson Ward, Jr., assistant to the publisher of The Huntsville Times, began working there as a cub reporter in 1957, later becoming the editor. A native of Birmingham and a journalism graduate of the University of Alabama, he has written or co-authored four nonfiction, space-related books. This year he is publishing a biography: This Man, von Braun: His Humor and Humanity

Ward researched the Mollie Teal story in the early 1970s, checking records and interviewing selected older individuals
during a six-month period. All his sources were "cooperative and helpful," although all requested anonymity. The article first appeared in The Huntsville Times on April 16, 1972, and won a first-place statewide award for newspaper feature-writing that year. Since then, Ward has expanded and updated the story. He has also placed the names of his original confidential sources, now all deceased, on file in the Heritage Room of the Huntsville-Madison County Public Library.

The author wishes to thank Margaret Belle Mahoney Crow, a coordinator and guiding force behind Huntsville's Maple Hill Cemetery Stroll , and Ranee Pruitt, archivist, Huntsville-Madi son County Public Library, for assistance in the revision and update of this article. 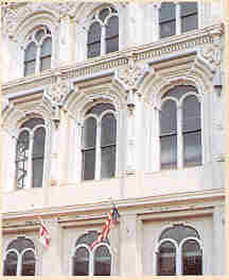 About the AHC/AHA
The sixth annual listing of places in peril was produced jointly by the Alabama Historical Commission and the Alabama Preservation Alliance after review of potential candidates by representatives from both the Commission and the Alliance. Recommendation from the general public are welcome. Representing the Alabama Historical Commission were Robert Gamble, Nathan Farris, Dorothy Taylor, Tom Maher, Stacye Hathorn, and Daphne Owens. Ed Hooker, Devereaux Bemis, Suzanne Wolfe, and Brandon Brazil represented the Preservation Alliance. Gene Ford of Moundville Archaeological Park contributed research to the project.

APA president Ed Hooker, architectural engineer with the Mobile Historic Development Commission, prepared the endangered place exhibit scheduled to tour the state for the coming year. To arrange for the exhibit to travel to your area, call Hooker at (334) 208-7281. To recommend a site for next year's list, contact the Alabama Historical Commission, 468 S. Perry Street, Montgomery, AL 36130; (334) 242-3 184.
To read about more places in peril, click here for our Places in Peril blog.
Back to Top 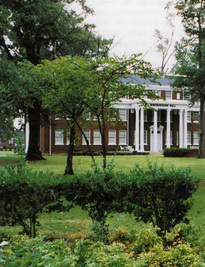 Established by the Southern Presbyterian Church to provide a "Christian education of practical value" and train young black men for the ministry, Tuscaloosa's Stillman College has played an important role in the education of African Americans in Alabama for one hundred and twenty-three years. Three buildings in particular serve as reminders of the college's rich heritage: Winsborough Hall and Emily Estes Snedecor Hall, both on the Stillman campus, and Stillman House on Twenty-first Avenue in Tuscaloosa.

Back to Top
Recollections
Mammy

Mammy grew up on the Taylor plantation in Northport, where she was a slave until her teens, at which time she was emancipated. Her life was difficult, but she made her way all the same, becoming a midwife. When Helen Friedman Blackshear wrote a tribute to Mammy titled Mother was a Rebel, she could not imagine that her story would serve as a catylist to bring Mammy's scattered descendants together.

About the Author
Helen Friedman Blackshear, a poet and author, lives in Montgomery, Alabama.
Back to Top 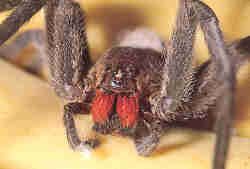 Phoneutria fera, the Brazilian wandering spider, often travels to the United States in shipments of tropical fruit. An insectivore, the spider is nonetheless dangerous: it is considered among the most venomous spiders in the world. Its bite can cause respiratory disease and death, particularly in small children. L.J. Davenport describes the habits and travels of this keen-sighted stowaway.