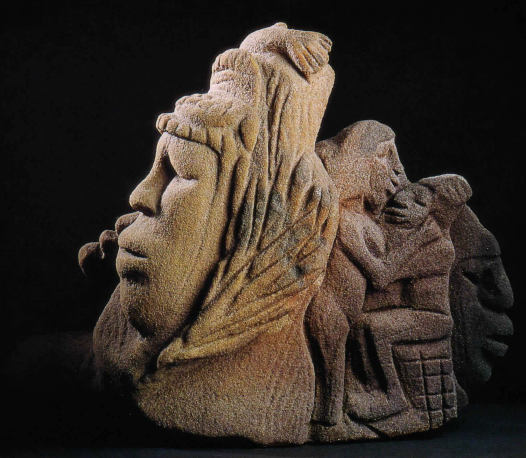 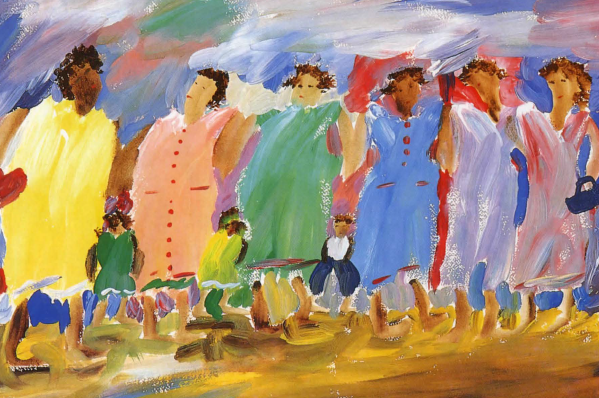 During the 1970s, public interest in painting and sculpture by artists who had not been trained formally began to grow, with an enthusiastic audience enjoying these works in museums and galleries as well as on album covers, T-shirts, and at folk festivals. Alabama's part of this folk art is rich, as Gail Trechsel's introduction notes the rural and religious influences of life in this state. Accompanied by stunning photographs of the artists' work, Kathy Kemp writes profiles of two of Alabama's most noted visionary folk artists, painter Woodie Long from Andalusia, and painter/sculptor Lonnie Bradley Holley from Birmingham.

The following article in the Encyclopedia of Alabama will also be of interest:

About the Contributors
Birmingham native Kathy Kemp has won national recognition for her stories in the Birmingham Post-Herald, where she has been a reporter since 1981. Among her many honors, Kemp was twice named "Nondeadline Writer of the Year" by the Scripps Howard Newspapers organization in 1987 and 1990.

Born and raised in the mountains of western Pennsylvania, Keith Boyer is a graduate of the Art Institute of Pittsburgh, Pennsylvania. During his eight years as a photographer with the Birmingham Post-Herald, Boyer was named the state's Photographer of the Year twice by the Alabama Associated Press. He has now embarked upon a free- lance career as a fine arts photographer.

Gail Trechsel, assistant director of the Birmingham Museum of Art, is well-known for her expertise in the field of self-taught visionary art.
Back to Top 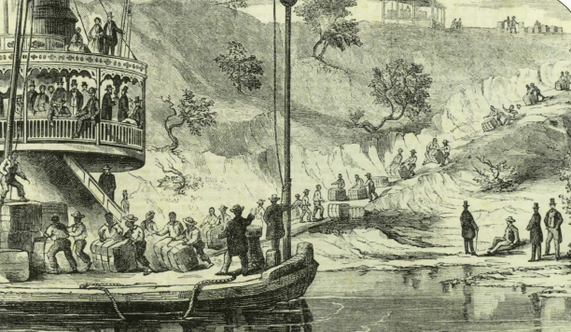 Slaves loading bales of cotton. Steamboats were efficient carriers of cotton, but they were also dangerous. Only a few sparks could turn a cotton-filled wooden steamer into a floating inferno. (Courtesy Alabama Department of Archives and History)
King Cotton in Alabama: A Brief History

For 130 years, Alabama was a leading producer of cotton, with pioneers rushing to the state in search of riches they hoped the plant would provide. Cotton did produce much wealth, ascending to the throne of Southern agriculture. But the crop was hard on the soil and harder on the people who worked with it, as Oliver's article notes the rise and fall of King Cotton in Alabama from the 1830s to the 1960s. Dealing with cultural changes, technological advancements and the infamous boll weevil, cotton production has changed drastically, and though cotton now represents only a small fraction of the state's economy, the author describes how Alabama still holds a position of great importance in the cotton industry.

About the Author
Thomas W. Oliver, IV, graduated in veterinary medicine from Auburn University in 1948. From 1950 until 1978, he operated a cotton plantation and gin in Montgomery County. The fifth generation in his family to grow cotton in Alabama, Oliver has served for the past ten years as chairman of restoration for the Landmarks Foundation in Montgomery. He recently supervised the reconstruction of an 1890s cotton gin in Old Alabama Town, the Foundation's collection of nineteenth-century buildings.
Back to Top 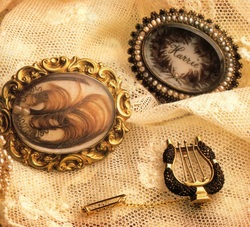 These 19-century brooches illustrate the vast array of styles available in hair jewelry. (Jewelry from the collection of Marion Yount Sams; photograph by Chip Cooper)
Sentimental and Memorial Jewelry

During the nineteenth century, it was common practice to ask a friend or loved one for a lock of hair or to give them one of your own as a keepsake. Often, this hair was boiled, weighted, glued, spun, woven, plaited, knitted, and crocheted into a dizzying variety of shapes and designs, and placed in jewelry designed specifically for this purpose. This article tells of the centuries-long history of this type of jewelry: sentimental jewelry, containing the hair of a living person, and memorial jewelry, containing the hair of someone deceased. With detailed photographs, the author notes the story and value of these pieces, including the personal link they represent: a loving relationship between two people who lived a century or more ago.
Buy This Feature
Additional Information

About the Author
Birmingham resident Marion Sams, the current president of that city's Antiquarian Society, has been interested in antique jewelry ever since she found a Civil War-era brooch while going through her late grandmother's possessions. Although she did not realize it at the time, Ms. Sams had begun her hair jewelry collection. That collection, assembled over a period of some twenty years, today includes about forty pieces. ''To give and receive hair jewelry," says Ms. Sams, "was a sentimental, lovely gesture. It had great meaning in a time when photographs weren't readily available to the general public." Ms. Sams, a graduate of the University of North Carolina at Chapel Hill and a recent graduate of the Winter Institute of the Winterthur Museum outside Wilmington, Delaware, lectures on the history and meaning of sentimental and mourning jewelry. She serves on the board of Arlington Antebellum Home and Gardens Museum in Birmingham.
Back to Top 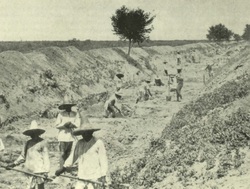 Beginning in 1889, prior to the arrival of the American sharecroppers, from two to three thousand Mexican peons dug irrigation canals for the vast hacienda, located in the Tlahualilo region of Durango. (Courtesy Engineering Magazine, May 1897)
From Plantation to Hacienda: The Mexican Colonization Movement in Alabama

A man named "Peg Leg" Williams began recruiting African Americans in central Alabama in 1895 to move to Mexico for the establishment of a colony. The promises of rich and fertile soil, economic prosperity, and equal rights to all inspired several hundred Tuscaloosa citizens to make the move to the northern Mexican state of Durango. Once there, the hopeful new life proved elusive, as author Karl Jacoby describes the poverty, ill-treatment at the hands of Mexican overseers, and poor living conditions encountered by the colonists. This article relates an interesting aspect of nineteenth-century black migration, one which proved fruitless and fatal to many.
Buy This Feature
Additional Information
The following article in the Encyclopedia of Alabama will also be of interest:

About the Author
Although born and raised in Massachusetts,Karl Jacoby spent much of his childhood in northern Mexico, where his grandparents ran a small ranch. It was there that his interest in American involvement in Mexico during the Porfiriato developed, eventually leading Jacoby to the story of William H. Ellis and the African American colony from Alabama.At present, Jacoby is a doctoral candidate in American history at Yale University. He welcomes letters from readers who have information or thoughts about William H. Ellis or the African American colony in Mexico. Please write in care of Department of History, Yale University, P. O. Box 208324, New Haven, CT 06520-8324.
Back to Top

Report from the Historical Commission
A Future for the Past

F. Lawerence Oaks discusses the origins of the Alabama Cultural Resources Preservation Trust Fund. The positive effects of the Fund have already become evident, and the money distributed promises to aid in the preservation and understanding of many facets of the state's history.

Additional Information
The following article in the Encyclopedia of Alabama will also be of interest:
Multimedia:
About the Author
Larry Oaks is Executive Director of the Alabama Historical Commission, Montgomery.
Back to Top 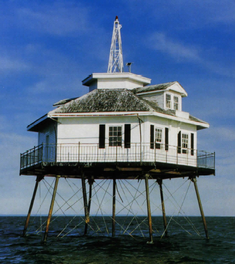 Hurricanes, Yankee gunfire, and time have taken their toll on Alabama's three Gulf Coast lighthouses, but the structures--and their quaint, sometimes tragic histories--live on, primarily because of the affection many Gulf Coast residents have for these beacons of light, and the time and money they are willing to commit to their preservation.

Additional Information
The following article in the Encyclopedia of Alabama will also be of interest:Multimedia"
About the Author
David Smithweck is cofounder and president of the Alabama Gulf Coast Archaeological Society, a nonprofit corporation.

Mindy Wilson, a former Alabama Heritage intern, is a graduate student in creative writing at the University of Alabama.
Back to Top
The Nature Journal
Giant Swallowtails (And Metamorphosis)

One of the most spectacular of Alabama's butterflies is the giant swallowtail, Papilio cresphontes. Ranging from Canada to the Mexican border, "giants" are the largest North American butterflies, with some individuals measuring six inches from one black-and-yellow wing tip to the other., L.J. Davenport discusses the life-cycle of this remarkable butterfly.

About the Author
Larry Davenport is a professor of biology at Samford University.
Back to Top
At the Archives
Early Photographs From the Collection

The Alabama Department of Archives and History has over 150 daguerrotypes, ambrotypes, and tintypes in its visual collection. These early photographs, created by the reaction of silver compounds to light or chemicals, span the years from 1840 through the 1920s. Although many of the photographs are not identified, the images provide and important link with the past and illustrate changes in dress styles as well as the evolution of the photographic process.

About the Author
Tanya L. Zanish is special collectiotls archivist at the Alabama Departmmt of Archives and History.
Back to Top