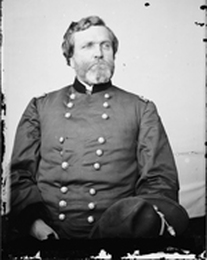 After William T. Sherman ravaged Gaylesville, Alabama, residents struggled even to subsist through the harsh winter. The Confederate army was in particularly dire straits as it desperately awaited the arrival of cattle and other much-needed supplies. In the interim, several “bushwackers,” including John P. Gatewood and Tom Polk Edmundson, took matters into their own hands, leading a daring raid of Union cattle reserves. The men captured over a thousand animals, securing food for their own troops, but also inciting the conflict even further.

About the Author
Zack C. Waters is a retired lawyer, teacher, and college professor. His latest book, A Small but Spartan Band: A History of the Florida Brigade in Lee’s Army of Northern Virginia (University of Alabama Press, 2010), won the prestigious Charlton Tebeau Award for the best book on Florida history for 2010. Over thirty of Waters’s history articles have been published, including “The Enigmatic Colonel Harry Maury and the Fifteenth Confederate Cavalry” in Alabama Heritage (Fall 2010). He, his wife, and daughter live in northwest Georgia, only fifteen miles from Gaylesville, Alabama. His son is an attorney in Atlanta. Waters is currently writing a book on Gen. Phillip D. Roddy and the war in northwest Alabama. The author thanks Larry Stephens, author of John P. Gatewood: Confederate Bushwhacker, and Robert Davis, of Wallace State College at Hanceville, for their help with this article. 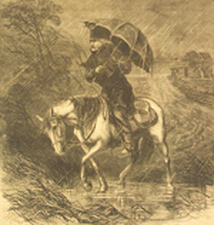 In the mid-nineteenth century, the Methodist clergy typically led itinerant lives, traveling throughout the state or region ministering to a number of different communities. Absent from home for long periods, these men entrusted their wives with a level of authority and responsibility that was uncommon for the era. In some cases, children also held exceptional authority. Throughout, the itinerant ministers of the 1840-50s often resorted to more inclusive structures of family governance than the more hierarchical forms adopted by laypeople. Charity R. Carney explores the consequences of such family structures, detailing their effects on both the family and broader society.

Buy This Feature
About the Author
Charity R. Carney is the author of Ministers and Masters: Methodism and Manhood in the Antebellum South (LSU Press, 2011). She received her PhD in history from the University of Alabama in 2009 and teaches at Western Governors University. Her current research is focused on the religious underpinnings of the American megachurch movement.
Back to Top 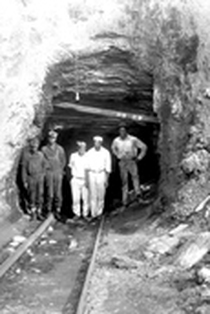 Four convict miners
at the entrance to Banner Mines.
(Birmingham Public Library)
When Only the Heavens Wept: Death at Banner

In the early twentieth century, the state of Alabama participated in a prominent yet controversial convict lease system, under which state convicts were contracted out as laborers for state businesses. One employer was Pratt Consolidated, which ran mines near Birmingham’s Industrial District. When disaster struck the Banner Mine, it focused attention on the convict workers, who labored to rescue survivors and attend to the dead—even as one of their fellow convicts was wrongfully blamed for the explosion. The worst mining disaster in Alabama’s history, the Banner Mine explosion eventually helped lead to changes in the convict lease system and increased awareness of the need for mine safety protocols. 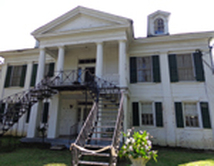 Each fall, Alabama Heritage joins with the Alabama Trust for Historic Preservation and the Alabama Historical Commission to identify sites in desperate need of preservation throughout the state. Our hope is that by alerting the public to the need, we will both increase awareness and inspire citizens to collaborate in addressing these endangered sites. This year’s list includes a number of significant structures, ranging from cotton gins statewide to the Primitive Baptist schools built for African American children to attend prior to desegregation. A number of former residences are listed, along with lodges, churches, and other community gathering places. Previous iterations of “Places in Peril” have brought attention to structures such as these, and we hope that this year’s edition will create similar dialogue and preservation, so that these important parts of the state’s history may be maintained for future generations.

About the Author
Melanie Betz Gregory joined the staff of the Alabama Historical Commission in the fall of 1989. A native of Illinois, she holds a BA in art history from Western Illinois University and an MA in architectural history and historic preservation from the University of Virginia. Gregory is an architectural historian working with preservation easements and endangered properties. 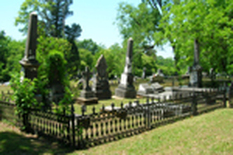 Although many people associate the idea of preservation with human-inhabited buildings such as commercial and residential structures, it actually encompasses a much larger scope and can cover everything from natural sites—such as battlefields—to manmade sites—such as monuments and even cemeteries. The Alabama Historical Commission’s (AHC) emphasis on maintaining such sites offers particular emphasis on cemeteries and graveyards statewide, providing tools for Alabamians who want to work toward the beautification and preservation of burial grounds in their area. In conjunction with classes and workshops, the AHC guides residents in documenting and registering sites, obtaining historical markers for them, and maintaining them as scared spaces—a common thread uniting urban and rural settings statewide.

About the Author
Lee Anne Hewett Wofford earned a BA in history and an MA in American studies from the University of Alabama. She has worked for the Alabama Historical Commission for twelve years and manages the Architectural Survey Program, the Alabama Register of Landmarks & Heritage, and the Cemetery Preservation Program. Robert Gamble, standing editor of the ”Southern Architecture and Preservation” department of Alabama Heritage, is senior architectural historian for the Alabama Historical Commission. 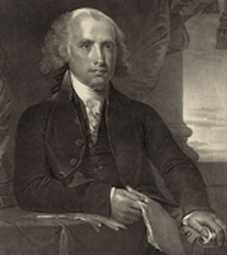 This quarter’s installment of “Becoming Alabama” takes us to 1812, 1862, and 1962—each a tumultuous time in the state’s history. As the War of 1812 continued, Americans fought Britain and risked angering other former allies by asserting claims to territory they considered their own. During the Civil War, a small but potent number of Alabamians declared their affection for the Union, abandoning the Confederate cause so cherished by many of their neighbors. And James Meredith’s 1962 attempts to integrate the University of Mississippi sent shock waves throughout the South, evoking renewed vigor among Alabama’s segregationists.

For additional information readers may consult the Encyclopedia of Alabama’s article on “Unionism.” 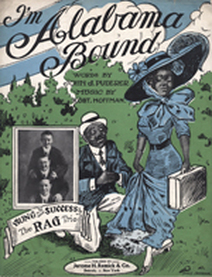 Thanks to generous gifts from a former alumnus, the University of Alabama’s Wade Hall sheet music collection offers researchers an unprecedented glimpse of the state’s musical history. Along with celebrating the state’s many musicians, from W.C. Handy to Hank Williams and Lionel Richie, the collection’s 5,500 titles reveal a rich tradition of music produced in Alabama, performed by Alabamians, and taking the state as its topic. 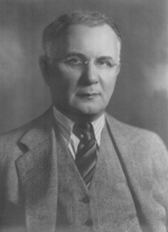 In this quarter’s column, Dan Puckett traces Alabama’s relationship to Zionism, offering historical perspective and explaining how cultural differences between immigrant populations from Central and Eastern Europe shaped the state’s awareness of and response to issues of Jewish settlement. During World War II, the state’s legislature united in support of creating a Jewish state—and became the first American state to endorse such a proposal.

About the Author
Dan J. Puckett, associate professor of history at Troy University, is the author of In the Shadow of Hitler: Alabama’s Jews and the Holocaust (University of Alabama Press). Joshua D. Rothman, standing editor of the “ Southern Religion” department of Alabama Heritage, is associate professor of history at the University of Alabama and director of the university’s Frances S. Summersell Center for the Study of the South, which sponsors this department. 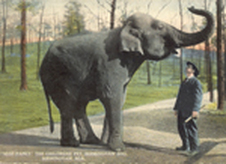 In the early-twentieth-century Birmingham, residents grew somewhat accustomed to what must have been a startling sight: an adult elephant roaming neighborhoods, sometimes in the company of an inebriated human. It sounds like something out of a novel (and indeed, she would later make a cameo in Fannie Flag’s Fried Green Tomatoes at the Whistle Stop Cafe), but Miss Fancy, as she was called, was very real. Brought to Birmingham as the flagship animal in its zoological collection, Miss Fancy charmed the city, leaving lots of fans (and a few downed trees) in her wake.

Additional Information
The author thanks several people who assisted in the research for this article: Patty Pendleton and Pat Flora at the Birmingham Zoo; Bob Cline of the Circus Historical Society; Peter Shrake at Circus World Museum in Wisconsin; Bruce Pratt at Cole Brothers Circus; and Jim Murray at the Birmingham Public Library. To learn more about elephants and elephant conservation, visit the website of the International Elephant Foundation website.

About the Author
James L. Baggett is head of the Birmingham Public Library’s Department of Archives and Manuscripts and archivist for the City of Birmingham.

In this quarter’s installment of “Nature Journal,” L. J. Davenport explores St. Andrew’s cross, a small plant with a complex social and cultural history. To understand its place in botany—and even society—Davenport takes us through a number of fascinating references, from golf courses and religious history to mathematics and Alabama’s state flag. Much more than a column about nature, this piece synthesizes information from a number of surprising sources and reminds us that ultimately, even the most disparate of items is connected to a broader part of the world.

About the Author
Larry Davenport is a professor of biology at Samford University. This column, running since 1993, inspired his book Nature Journal (University of Alabama Press, 2010).

Back to Top
Reading the Southern Past:
From Steamboats to Railroads: Travel Technology in the Nineteenth-Century South

As Alabama began supplementing its agricultural roots with forays into industrial pursuits, the state’s transportation patterns shifted. Stephen Goldfarb traces the changing modes of transportation throughout the state, surveying texts that cover the steamboat and railroad industries. His column considers Robert Gudmestad’s Steamboats and the Rise of the Cotton Kingdom (Louisiana State University Press, 2011) and Wayne Cline’s Alabama Railroads (University of Alabama Press, 1997), tracing how the state’s commercial identity has shaped its transportation patterns.